Olivia Gant's story played out on TV as she checked items off her "bucket list" before succumbing at age 7. 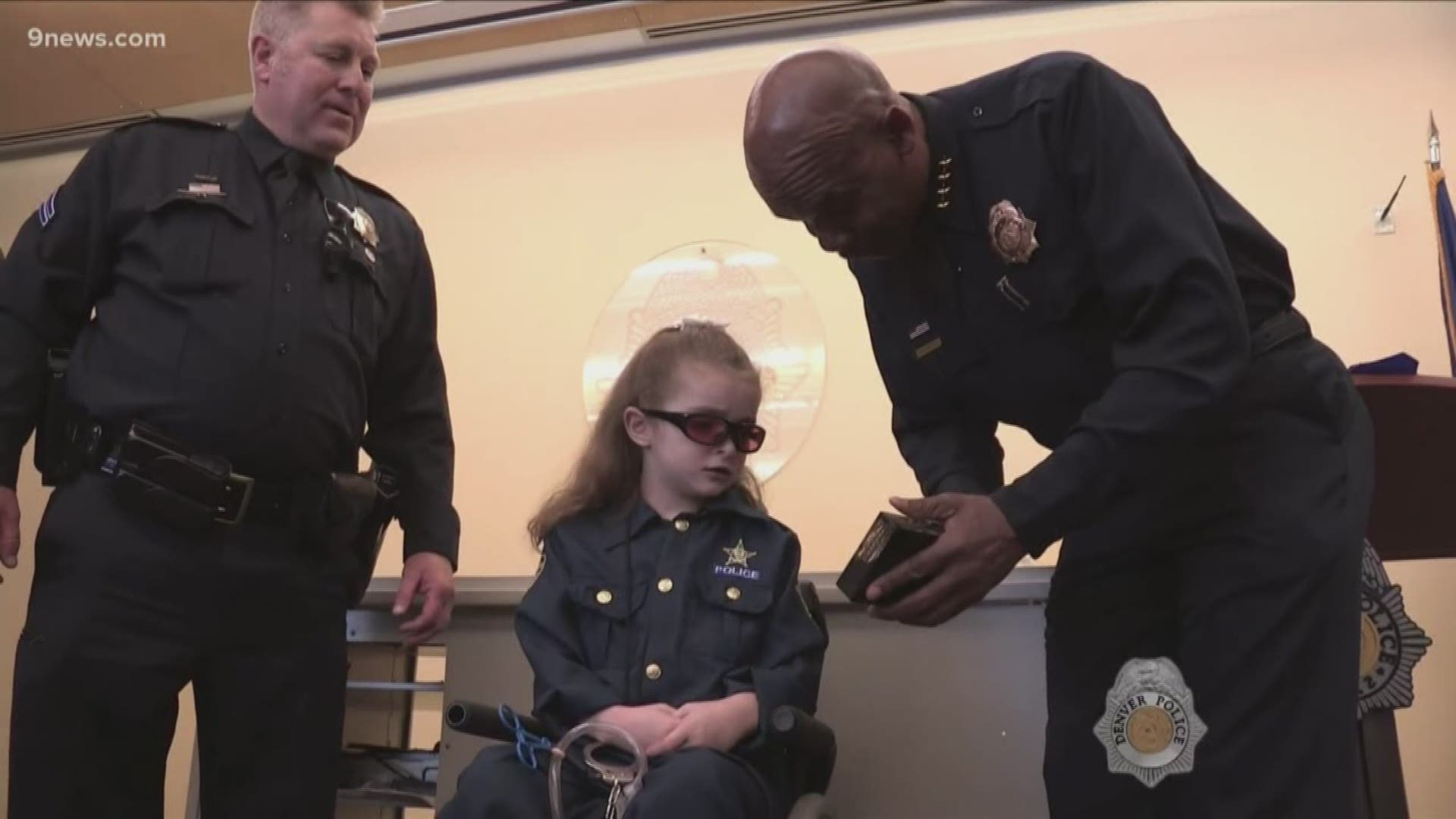 DENVER — The 2017 death of Olivia Gant, a 7-year-old whose “bucket list” of final wishes evoked heart-touching news stories, wasn’t the result of multiple diseases – it was a murder carried out by her mother, according to a grand jury indictment unsealed Monday and obtained by 9Wants to Know.

Kelly Renee Turner, also known as Kelly Gant, faces 13 separate counts – 11 of them felonies, including first-degree murder – in the death of her middle daughter, according to the indictment. (Read the full list of counts on the indictment at the bottom of this story.)

Turner also is accused of defrauding the Medicaid system, two foundations that provide memorable experiences to terminally ill children and hundreds of people who donated to her online fundraising page.

The indictment alleges that she defrauded the Medicaid system of more than $538,000. And it further alleges that she ripped off both a funeral home and a cemetery that handled the girl’s arrangements.

> The video below aired in August 2017 shortly after Olivia passed away. 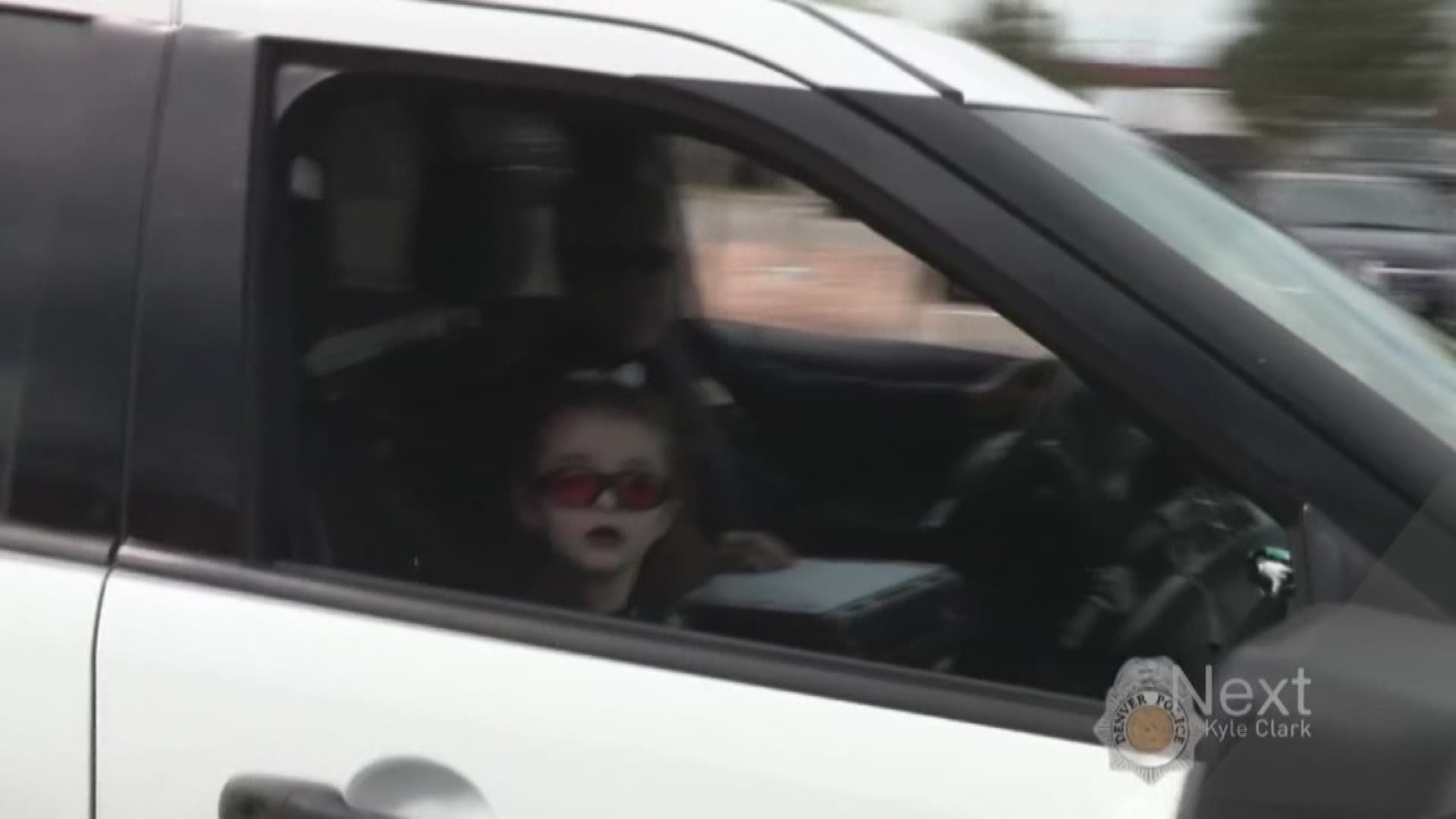 In addition, Turner faces a child abuse charge accusing her of endangering another daughter, who is now 11 years old. Turner claimed publicly the girl had cancer – something the girl’s medical records show was not true.

Although the names of both Olivia and her sister are redacted in the indictment, 9Wants to Know has confirmed their identities.

Turner, 41, was jailed over the weekend, 9Wants to Know confirmed.

Although the indictment does not make clear the specific cause of Olivia’s death, it notes that Turner withdrew medical care and nourishment in the girl’s final weeks.

A man who answered the door at the Highlands Ranch home where Turner was living with her parents said, “No comment. Get off our property. We’re going through enough.”

He did not identify himself.

Olivia’s heart-tugging story played out on television stations and in newspapers in the Denver area and nationally – a sick little girl experiencing the thrill of riding in a police car and shooting water on a fire before succumbing to an untreatable mix of medical issues.

But the indictment paints a much more sinister picture: Multiple doctors who didn’t believe Olivia was terminally ill battling a mother who was so persuasive that she convinced one of the physicians to sign a “do not resuscitate” order and ultimately withdrew all of her daughter’s medical care – including what is known as Total Parenteral Nutrition, which provided nourishment through an intravenous line.

At the time, according to the indictment, Turner argued that Olivia was so sick, and her quality of life so poor, that the humane thing to do was to stop medical care and allow her to die.

One of her multiple physicians, Dr. Robert Kramer, told investigators he was stunned by the turn of events.

“Dr. Kramer said that (Olivia) was not a terminal patient and was ‘shocked’ when he heard that Turner withdrew all medical care and (Olivia) passed away,” according to the affidavit.

Turner denied any wrongdoing when she was questioned by investigators from the Douglas County Sheriff’s Office.

But according to the indictment, as Turner was questioned, she mentioned a rare psychological disorder known as “Munchausen syndrome by proxy,” where parents or caregivers seek attention as a result of the illness of someone in their care. In extreme cases, parents or caregivers actually cause injuries or illnesses that later require medical attention.

According to the indictment, “Turner said, ‘That has never been my case, like at all, whatsoever. You can talk to anyone that stood by my side through … all of this.’”

The document noted that it was Turner who raised the subject, which had not been mentioned by either detectives or social workers present for the interview, according to the indictment.

The indictment, handed up last Thursday, follows a year-long Douglas County sheriff’s investigation and is a shocking turn in a case in which Olivia’s long battle with a host of medical conditions – autism, severe allergies, problems eating, unexplained pain, seizures, intestinal failure – and her sister’s supposed cancer battle were chronicled on a blog, on Facebook and in news stories. Among those stories were ones that appeared on 9NEWS and on other Denver stations as well as on the nationally syndicated program Entertainment Tonight. 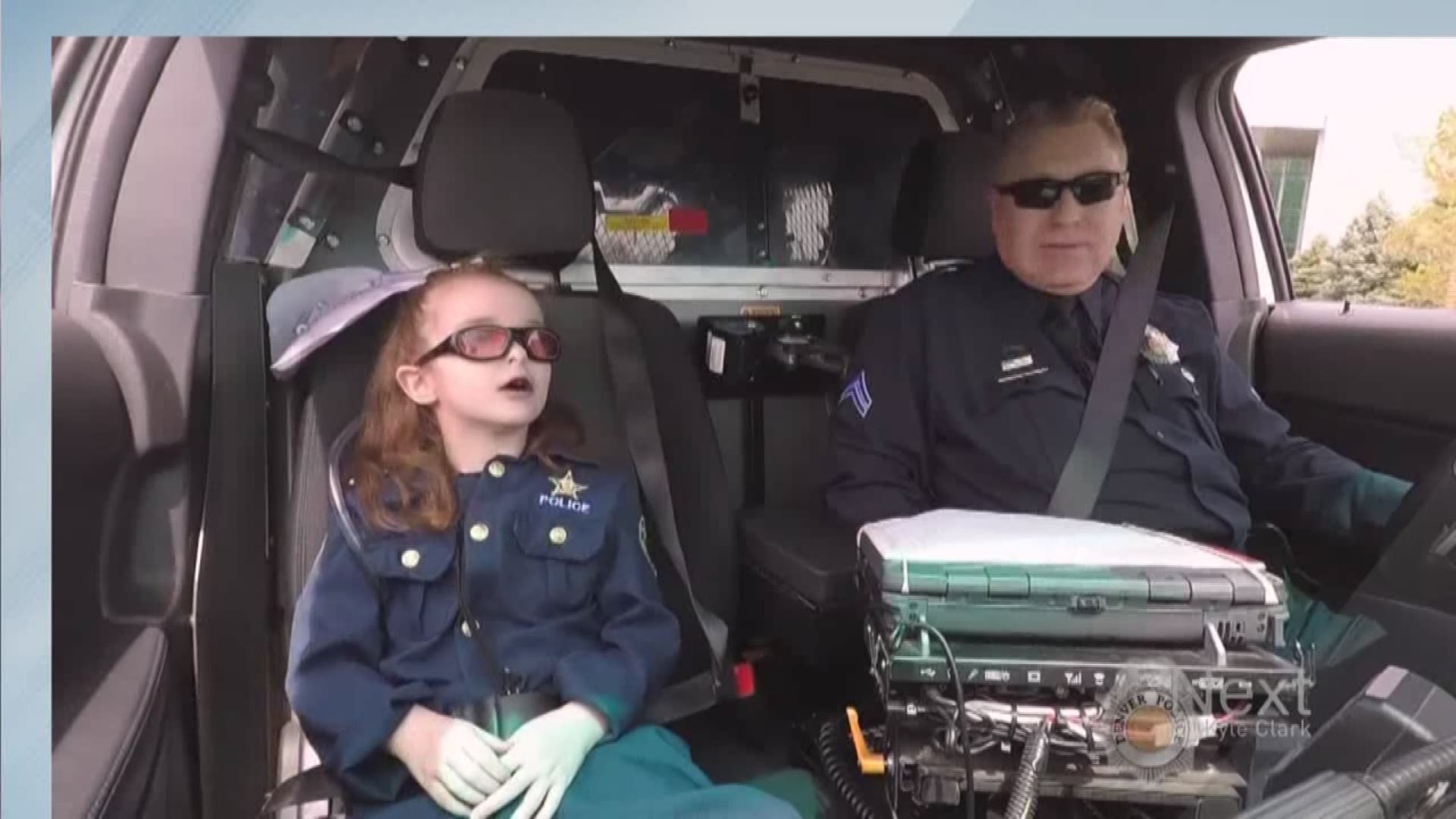 After Olivia died, her cause of death was attributed to intestinal failure.

But after investigators exhumed Olivia’s body in November 2018, a forensic pathologist found no evidence of intestinal failure or “many of the conditions” that Turner claimed Olivia had been diagnosed with, according to the indictment.

The pathologist, Dr. Kelly Lear, is Arapahoe County’s coroner. She ruled the manner of the girl’s death “undetermined.”

> Video below: 'A lot of doctors thought this case was odd' 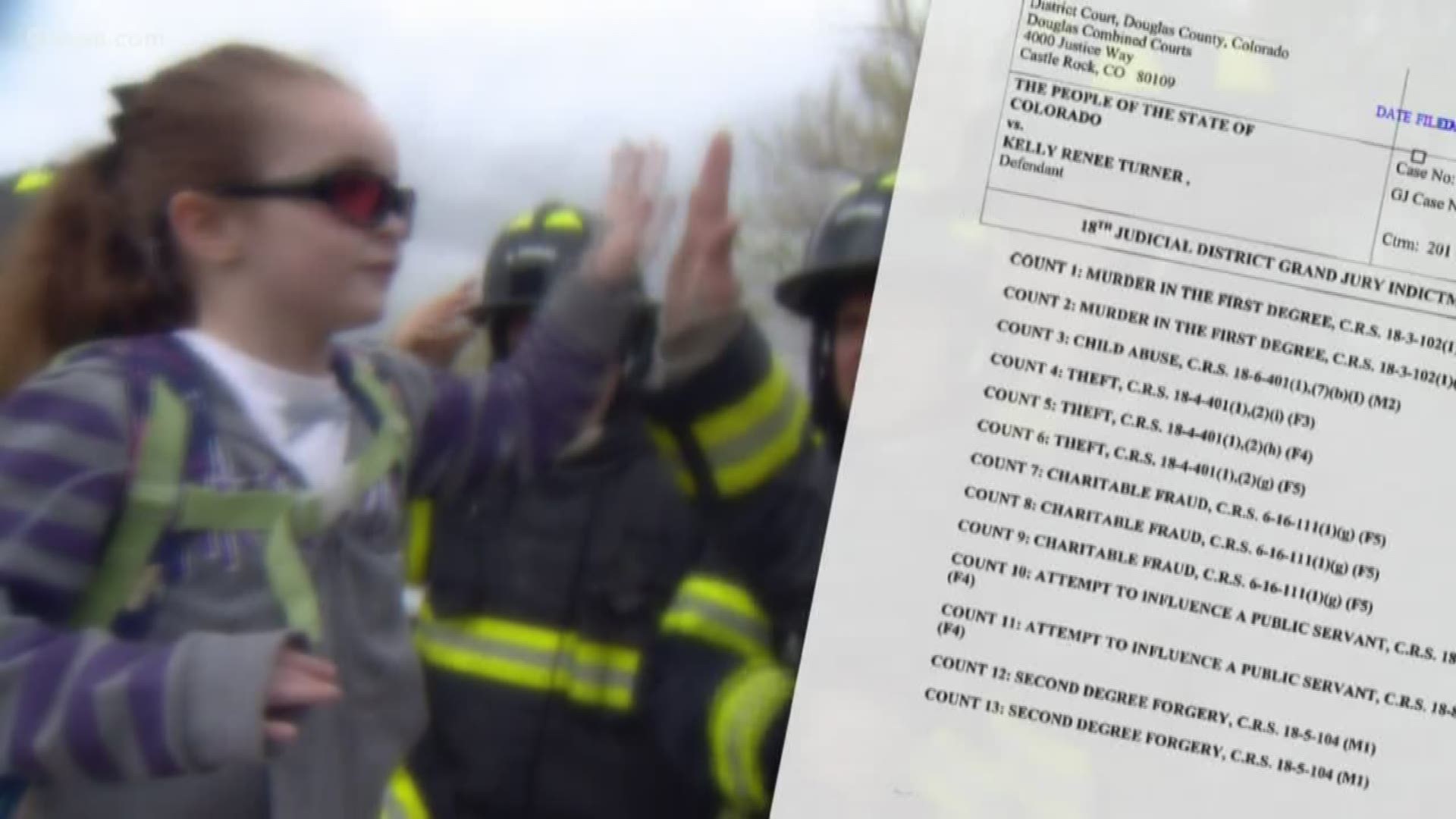 As far back as 2011, an online blog, apparently run by Turner, featured numerous posts about the terrible medical problems she said two of her three daughters faced. At the time, Olivia was 13 months old; the other girl was 3.

The family was also living in Texas at the time.

The first entry on the blog appeared Aug. 2, 2011, and was titled, “Pray For Livi.” It spoke of Olivia having a misshapen head and a vascular malformation in her brain that could cause seizures, blindness or an aneurysm. Minutes later, a message was posted about the 3-year-old daughter, saying she had osteomyelitis, a bone infection, in her ear and an immune deficiency. The posts appear to have been written by Turner – in another one, she requested prayers for another daughter, then 11, that she not be neglected while her younger sisters battled their serious medical problems.

Over the next 14 months, there were numerous updates on the two girls, according to entries obtained by 9Wants to Know.

All of that, according to the indictment, was not true.

> Video below: What is Munchausen syndrome by proxy? 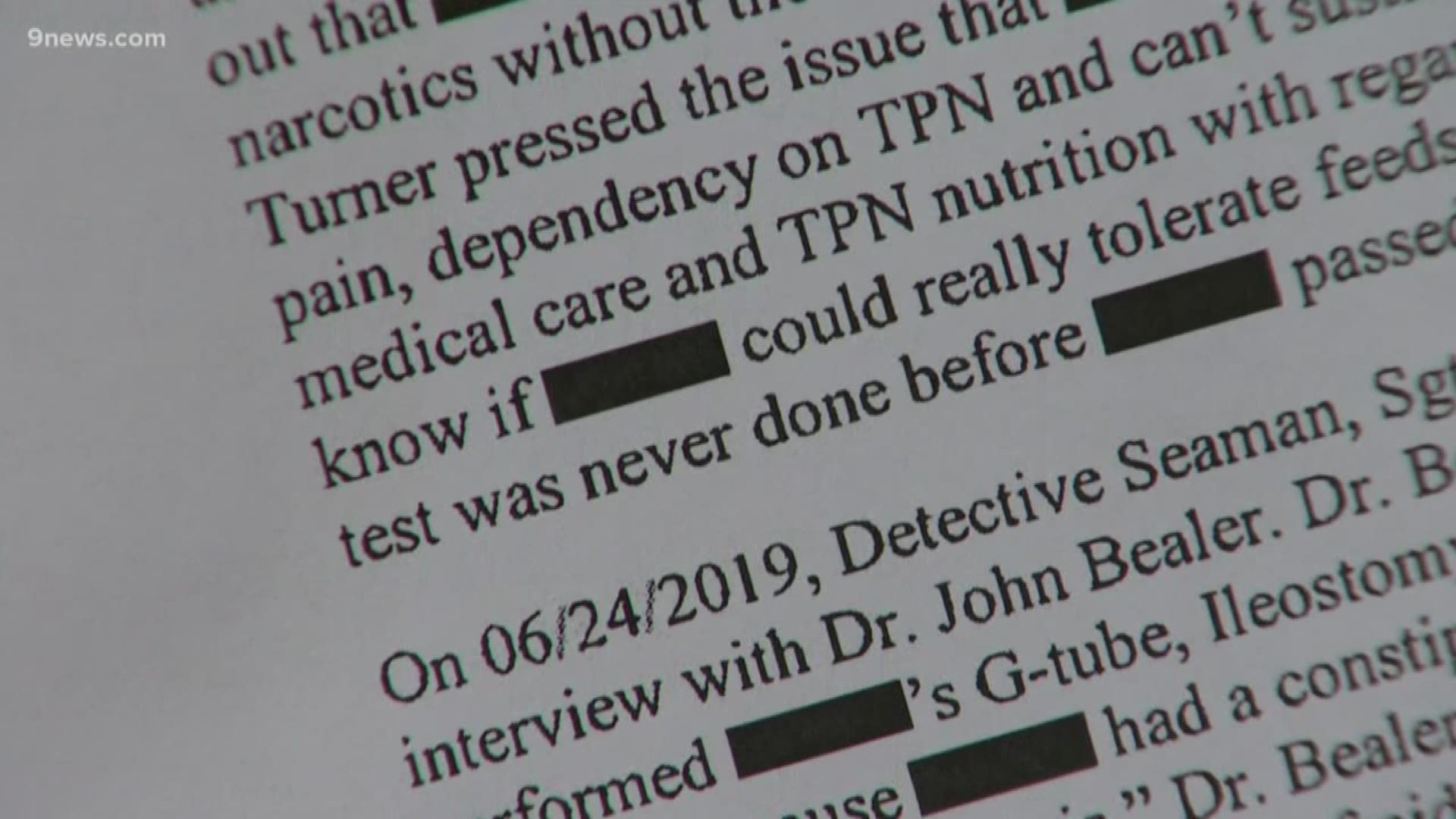 Along the way, there were multiple fundraising efforts – an account at a Texas bank, a donation “button” on the blog’s web page, a GoFundMe site, a bake sale, a night for the Gant Girls at a Chick-fil-A. The most recent entry on the GoFundMe page showed more than $22,000 in donations.

There were posts on Facebook, and eventually series of news stories chronicling Olivia’s “bucket list” of last wishes.

Olivia was the “Bat Princess” for a day. Olivia was a Denver cop, riding in a patrol car and busting “bad guys.” Olivia spent a day as a firefighter, riding high into the air to spray water on a fire.

On the day that South Metro and Littleton firefighters made one of her dreams come true, Turner looked into a camera and described Olivia as a “ball of fire.”

“She’s in intestinal failure, and we don’t know how much longer she has,” Turner said in the story that was aired on 9NEWS. “And so we made a bucket list, and one of her things was to become a firefighter.”

Turner said she didn’t “have the words to describe how I feel. It’s just a bunch of ball of emotion.”

“The outpouring of support that our little community has given, you just can never repay that,” she said. “You just take it one day at a time and we’re thankful for what we have.”

But all of it, according to the indictment obtained by 9Wants to Know, was a sham.

There were questions among several of her doctors at Children’s Hospital Colorado that something was wrong – at least five of them would tell investigators that they did not believe Olivia’s medical problems were terminal. One said he even doubted the original diagnosis that the girl had autism.

Dr. Kristen Park told investigators that she found no evidence that Olivia ever had seizures and told Turner three separate times to stop giving her daughter an anti-seizure medication that had serious side effects.

Dr. Robert Kramer described Olivia as “social and very talkative” and “did not diagnose” the girl “with any of the diseases that Turner wrote about in the GoFundMe page.” Kramed told investigators he was “shocked” when he learned that Turner had withdrawn medical care and that the girl had died, according to the affidavit.

But for more than a year, no one apparently questioned Olivia’s death. Then the reported illness of Olivia’s older sister sparked the investigation.

That girl was first treated at Children’s in 2013, after the family came to Colorado, according to the affidavit. In 2018, that girl’s primary care doctor retired and she started seeing a new physician. That new doctor grew suspicious after learning that Turner claimed that she’d undergone chemotherapy and radiation treatment for three years in Texas after being diagnosed with cancer.

That doctor called physicians and hospitals in Texas and learned the girl was never diagnosed with cancer.

At the time, Turner had brought the girl to Children’s several times, saying she was suffering from bone pain. Turner’s assertions about that daughter’s medical history – and Olivia’s death – led a doctor to report those suspicions to human services officials in Jefferson County, where Turner was living at the time she sought treatment for Olivia. The case was transferred to Douglas County because Turner moved there at some point.

Children's Hospital released the following statement about the case: "At this point we do not want to compromise any active legal matters. We will not be providing comment on this case at this time."

As for that older girl? According to the affidavit, she “has not had any additional medical problems or complaints of pain since 10/11/2018.”

That’s the day that Douglas County sheriff’s investigators interviewed the girl at school – and presumably the day Turner realized she was under scrutiny.

Kelly Renee Turner, also known as Kelly Gant, was indicted on 13 separate charges in the 2017 death of her daughter, Olivia Gant, and the mistreatment of another daughter:

“Us being a victim of theft is so minor compared to what happened to her daughter that it’s irrelevant,” said Rebecca Holm, director of customer care at Seven Stones Cemetery.

Mike Heflebower, owner of Heflebower Funeral Home, termed it “a really difficult situation for all those involved.”

We are deeply disturbed by the allegations in this case and intend to follow it closely in the hope of learning exactly what happened. Our procedures for granting a wish require a referral from the child’s medical team, and we rely on their assessment. As we seek to learn more about the circumstances that led to Olivia’s death, we fondly remember her spirit and hope that granting her wish brought some joy to her tragic life.

Contact 9NEWS reporter Kevin Vaughan with tips about this or any story: kevin.vaughan@9news.com or 303-871-1862.