The mother is also accused of lying to get more pain medications for the victim. 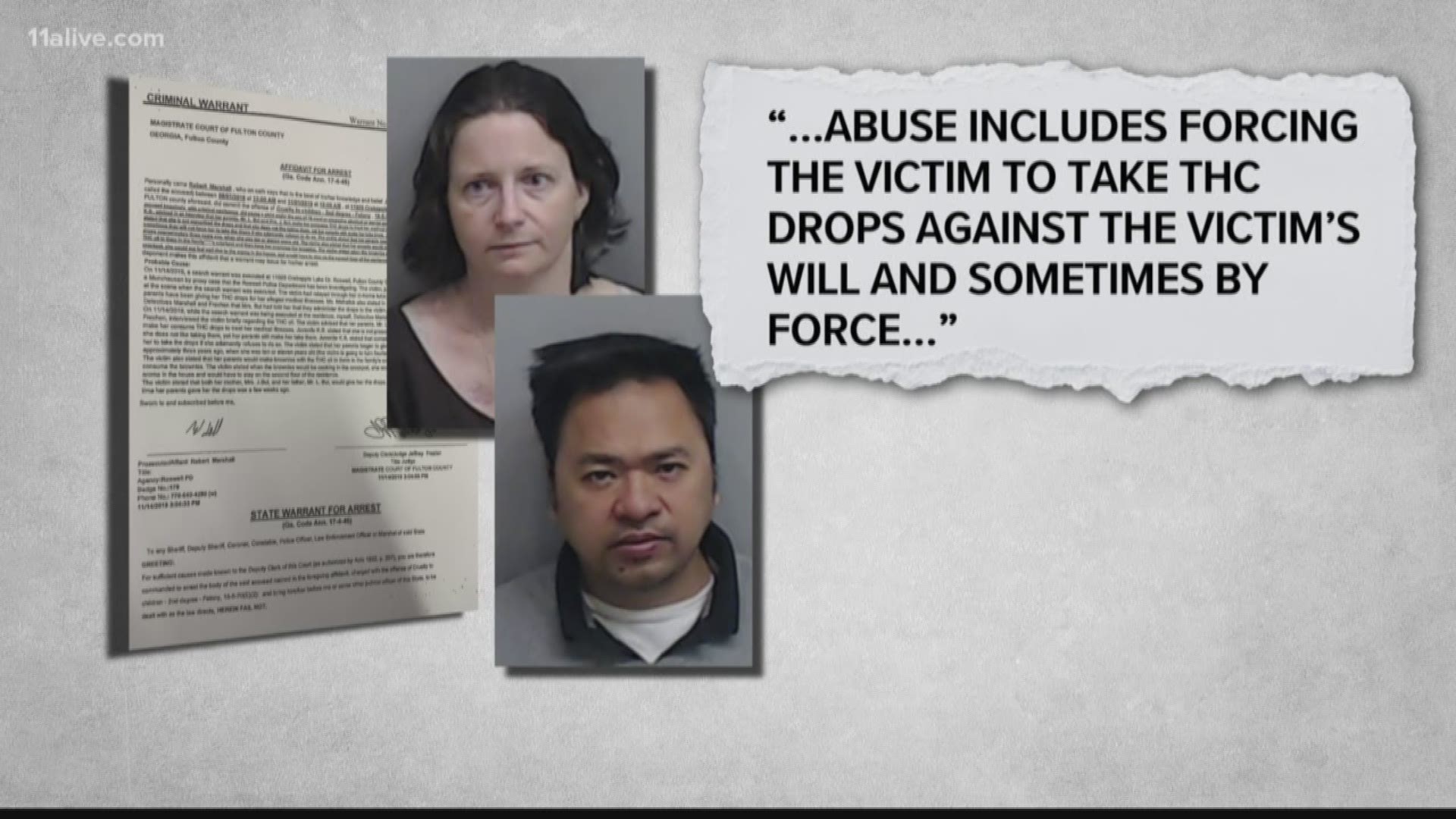 FULTON COUNTY, Ga. — A Fulton County couple is charged with child cruelty for allegedly forcing their child to take THC drops for three years - starting when she just 10 or 11.

According to an arrest warrant for Lark Bui, a search warrant was executed on Nov. 14 at the house he shared with Jennifer Bui on Lake Drive, in reference to a Munchausen by proxy case.

Jennifer is accused of coaching the teen on what to say - and not to say - to doctors about any alleged medical conditions. She's also accused of lying to doctors and nurses to get additional pain medications administered to the child after a procedure at an Atlanta hospital in 2018.

A warrant details infection prevention instructions ignored for a port and pic line the victim previously had.

The warrant also said the victim told her in-home tutor her parents had been "treating" her with THC drops for "alleged medical illnesses" for about three years - starting when she was 10 or 11 and continuing until recently when she was about to turn 14.

RELATED: 'These children were living in deplorable conditions': Parents charged with five counts of child abuse after juvenile's Halloween call for help

In an interview with police while they conducted the search, the girl "advised their her parents, Mr. L Bui and Mrs. J Bui, make her consume THC drops to treat her medical illnesses... (the girl) stated that she is not prescribed the drops and that she does not like taking them, yet her parents still make her take them."

The warrant also laid out how the parents would allegedly cook brownies laced with THC often to give to their daughter instead of the drops.

"The victim also stated that her parents would make brownies with the THC oil in them in the family's crockpot and then have her consume the brownies," the warrant states. "The victim stated that when the brownies would be cooking in the crockpot, she would not feel well due to the aroma in the house and would have to stay on the second floor of the residence."

When the girl "adamantly refuses" any THC, she said her parents would not further force her to take it. According to the warrants, the parents told the teen she couldn't leave the house because of her alleged medical conditions. And her tutor said she believes she saw the child under the influence of THC.

On Nov. 14, she told police the last time she had been given the THC drops was a few weeks prior.

The state has now taken custody of the victim and another child who was in the home. The parents have also been ordered to have no contact with their child.

11Alive went to the home where the suspects and the victim had lived to ask about the felony charges against the Buis. Cars were parked in the driveway but no one answered the door.

What is Munchausen by proxy?

According to the Cleveland Clinic, Munchausen by proxy is now known as Factitious Disorder Imposed on Another (FIDA) and is described as a "mental illness in which a person acts as if an individual he or she is caring for has a physical or mental illness when the person is not really sick."

"Fortunately, it is a very rare condition," 11Alive medical analyst, Dr. Sujatha Reddy said. "Most healthcare providers will never see a case of Munchausen by proxy in their entire career."

Reddy said the syndrome comes with few warning signs and no obvious cause. She said that if the child was forced to take THC for three years, it might or might not have a long-term impact.

"There is no concrete data. Hopefully, if it was mild enough, low enough dose, I hope it won't have any impact," Dr. Reddy said. "As far as the psychological impact, you know, we just don't know. Does the child even know what was happening to them?"