“Don’t come in here, I got a lot of shots,” the suspect warned officers after he opened fire from inside the Stockbridge home. 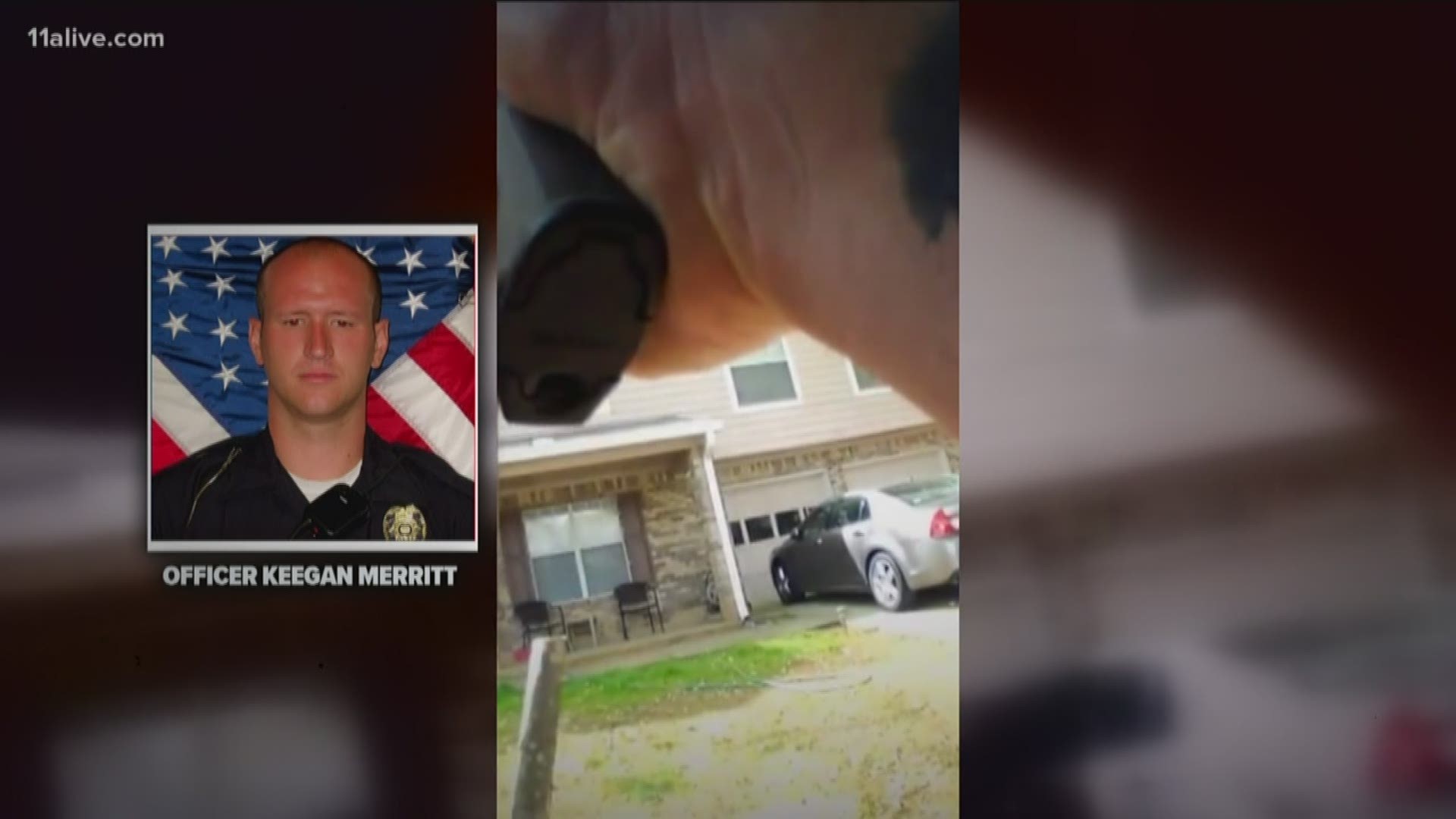 HENRY COUNTY, Ga. — Henry County Police released bodycam video showing the moment officers kicked in the front door and met gunfire while responding to a call at a home on Thursday.

Authorities were called to the house in Stockbridge, Georgia, after Sandra White's sister went to the home to check on her and saw her body in the garage. The sister then called 911.

“232 radio. Female visible inside unresponsive, about to force entry,” Henry County Police Officer Taylor Webb is heard saying as he stood outside the front door just before 10:30 a.m., which was donned with a wreath.

As Webb kicked in the door, gunshots can be heard coming from inside the home. The suspect, identified as 47-year-old Anthony Tony Bailey Jr., can be heard saying, “Don’t come in, don’t come in here. I got another shot.”

Webb ran into the home and was shot, his body camera flung into the carpet. Henry County Police said Webb was shot in the torso. A third officer, who was standing to the side of the front door, was nearly grazed by a bullet that whizzed past his gun, the video shows.

A third officer, identified as Officer Keegan Merritt, was seen on video running toward the home from his car after shots rang out. He took cover behind a tree, ready to fire, when he appeared to be shot in the hand.

“OK, I’m hit. I’m hit,” Merritt can be heard saying as he drags himself and his gun away from the yard.

MORE BODYCAM: Henry County officer flings himself out of garage during rescue after being shot twice

The hostage, later identified as 16-year-old Arkeyvion White, was later found shot to death in an upstairs bedroom. It is unclear if he was alive at the time officers attempted to enter the home.

►RELATED: Lives cut short: A student-athlete with a promising future. A registered nurse and expectant mother.

“I ain’t coming nowhere,” he replied.

“Where’s that officer at?” One of the officers is heard yelling on Webb’s camera.

“He’s downstairs somewhere,” Bailey responded. “I don’t know. I shot and he moved.”

According to Henry County Police, Webb made it to the garage, where he saw the body of Sandra White, Bailey’s pregnant girlfriend. Police said other officers helped get him out of the garage.

Both injured officers were transported to Grady Memorial Hospital with non-life-threatening injuries. On Friday, Henry County Police Captain Joey Smith said they each underwent surgery and are recovering.

Both are said to be 7-year veterans of the force.

READ: These were the Henry County officers shot in the line of duty

The incident ended up becoming a 15-hour standoff with Bailey, who refused to come out of the home or give officers any idea of the condition of White and her teenage son.

Police eventually made "dynamic" entry into the home and found the bodies of White, her son and Bailey, who died of an apparent self-inflicted gunshot wound.

Police believe that Sandra White and Bailey were in a relationship, and when she tried to break up with him, it sparked the violence.