Police said the victim was punched, carjacked and kidnapped before she jumped out of a moving car to save her and her child's lives. 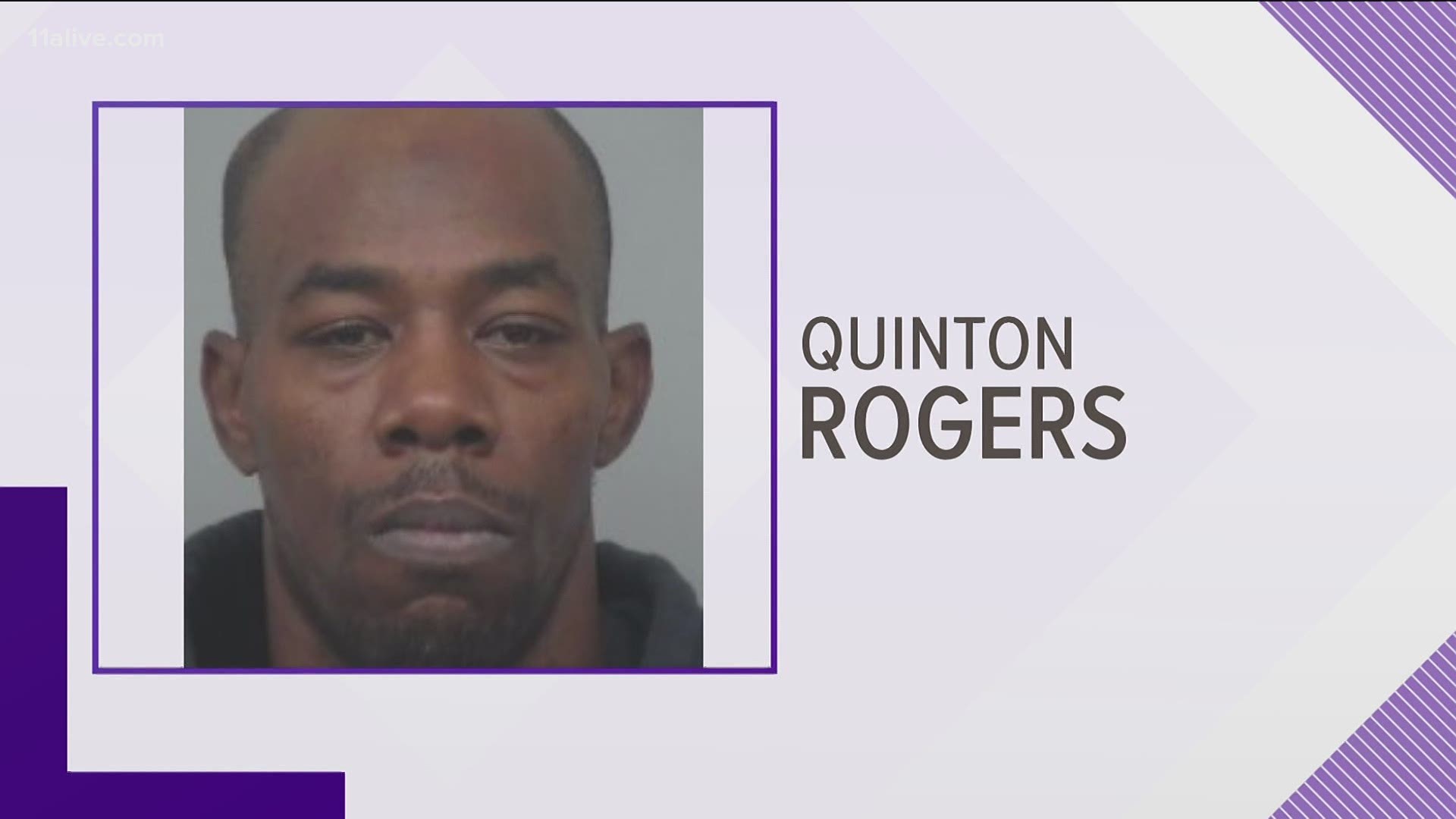 GWINNETT COUNTY, Ga. — The man who police believe was behind a scary carjacking that they said forced a mom to jump out of a moving car with her infant has been identified by police. Now authorities are trying to find him, to arrest him.

Police said they have secured warrants for the arrest of Quinton Rogers, 42, of Atlanta. He's charged with hijacking a motor vehicle and two counts of kidnapping.

Gwinnett Police said the frightening moments were all caught on video surveillance at the Exxon Gas Station at 1350 Boggs Road.

Police said the woman had stopped at the gas station on the night of Aug. 18 after buying food on her way home. Police said she had stepped outside of her car to eat, standing at the trunk, so she would not awaken her 1-year-old daughter, who was in her car seat in the back.

A man, who they now identify as Rogers, walked into the gas station parking lot.

Police said when Rogers saw the woman, he changed directions and walked right up to her, behind her. Police said the woman was visibly startled when he walked up behind her, then he reached under his shirt for what the victim believed was a gun. Police said he then punched her in the face multiple times.

RELATED: Punched, kidnapped, and carjacked | Mom jumps from moving car with her baby

At that point, police said Rogers forced the woman into the backseat of the car with her baby while he got in the driver’s seat. The vehicle can be seen on surveillance leaving the scene with two of the car doors wide open.

Police said as Rogers was driving with the victim and her baby, he demanded money from her and told her he was going to choke her and kill her. Fearing for her life, police said the victim spotted a fire station, and decided she was going to try to get to it with her baby. She grabbed her baby’s car seat with the child inside and jumped from the moving car. As she jumped, police said the suspect kept driving.

The victim made it to the fire station. She was treated for injuries as police were on their way to her. Her child was not hurt but the safety seat was damaged.

"This was a totally random crime," said Gwinnett County Police Corporal Collin Flynn on Thursday.  "We're very happy that she was safe and that her child was safe. She jumped out of the car as it was moving at a fairly high rate of speed. That safety seat seemed to take the brunt of the impact, and prevented the child from getting hurt."

Police later found the woman's car abandoned near Duluth. They were able to gather and process evidence from the car and from the gas station security camera video to identify Rogers as the suspect.

Flynn said Rogers has a criminal record in Gwinnett County.

"The photo of Rogers that we put out is from a previous arrest," Cpl. Flynn said. "Those prior arrests did help us in identifying who he is" in this case.

Authorities are now calling for Rogers to turn himself in, but they are asking anyone who may have information to share about where he may be to contact Gwinnett County Police detectives at 770-513-5300.

Callers can remain anonymous should they choose to contact Crime Stoppers at 404-577-TIPS (8477) or www.stopcrimeATL.com. Tipsters can receive a cash reward for information leading to an arrest and indictment in this case.