The president of the Atlanta Police union says changes in crime data are an unintended but direct consequence of how recent use of force cases have been handled. 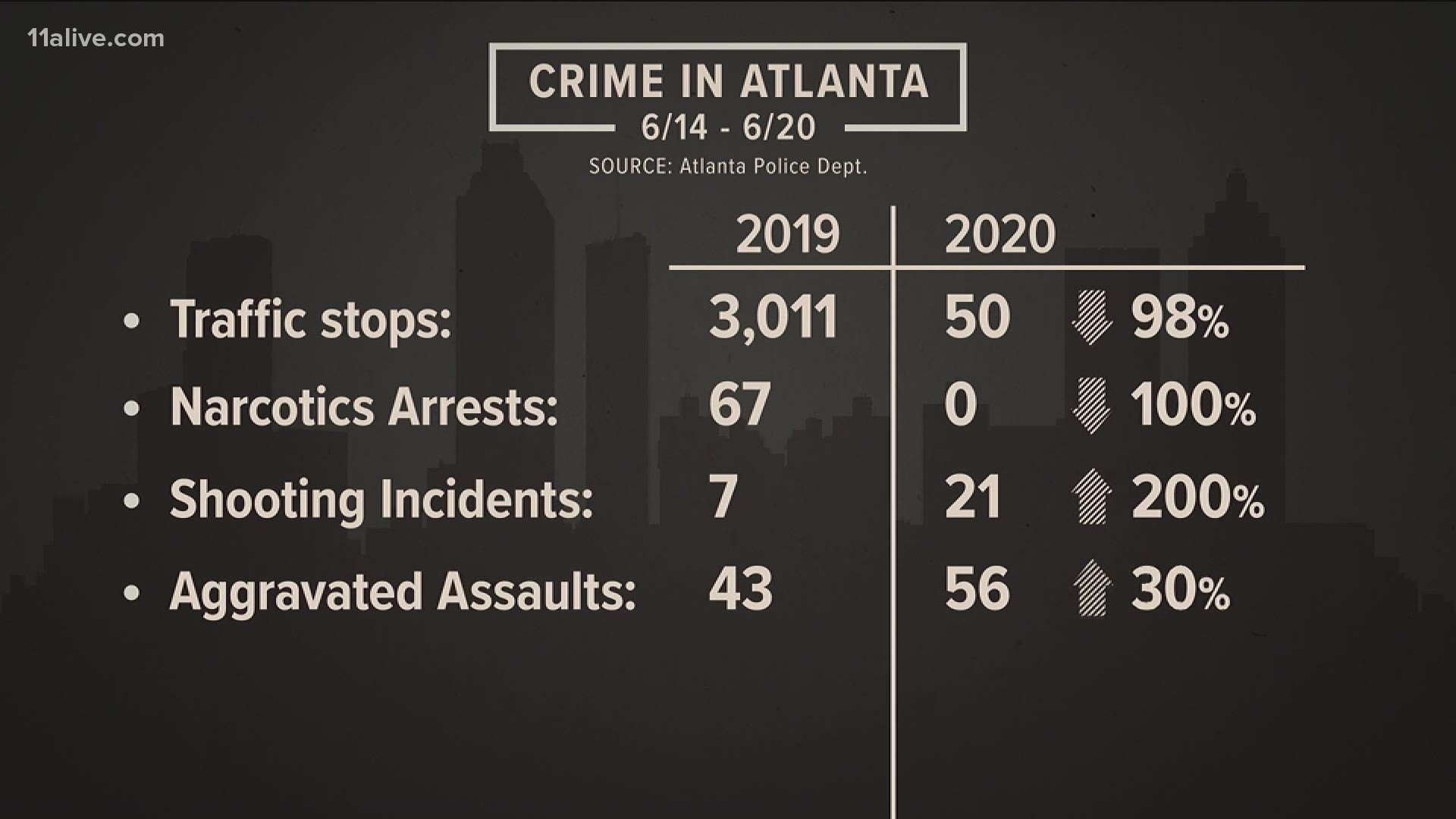 ATLANTA — Data from the Atlanta Police Department shows some violent crimes are on the rise, compared to 2019. And some believe it could be part of the continued fallout surrounding the killing of Rayshard Brooks, with the officers currently facing felony charges.

Jason Segura, the Atlanta Police Union president with the local chapter of the International Brotherhood of Police Officers (IBPO), said officers currently fear the next traffic stop or arrest they make could lead to them being charged with a crime.

"The idea of going out and coming into contact with anybody that is going to have the potential for resistance is just terrifying to officers right now because we have no playbook," he said. "It was removed."

After Rayshard Brooks was shot and killed by Atlanta Police outside a local Atlanta Wendy's on June 12, Mayor Keisha Lance Bottoms quickly issued administrative orders and changed the department's policy

Those changes including limiting the use of deadly force and requiring officers to intervene if they see other officers using force inappropriately.

In the days after officers, Garrett Rolfe and Devin Brosnan were charged with the shooting death of Brooks, the so-called blue flu took place. Atlanta Police roll call sheets show officers called in sick and missed their shifts more than 170 times over a four day period.

Credit: WXIA
Crime in Atlanta during the week of 6/14-6/20 as officers called out sick during the Blue Flu, compared to the same week in 2019.

Officers made no narcotic arrests during that time period, compared to 67 in 2019.  Shooting incidents and aggravated assaults also both went up during the week compared to one year ago.

Add in the three weeks before the Blue Flu and crime trends still appear to be similar. Traffic stops and narcotic arrests were both down significantly compared to 2019, as shootings and assaults trend upward.

On Thursday, Bottoms announced the city's newly formed use-of-force council had given her 10 early actions she could take to start reforming APD's use-of-force policy, as the council works on a more long-term proposal.

Looking at major crimes in the city of Atlanta, murder and aggravated assaults are up slightly year-to-date in 2020 compared to 2019.

Meanwhile, burglaries are down 18 percent, robbery is down 26 percent and rape is down 58 percent.

11Alive requested interviews on Monday with Mayor Bottoms and the head of the city council's public safety committee, but neither were available.