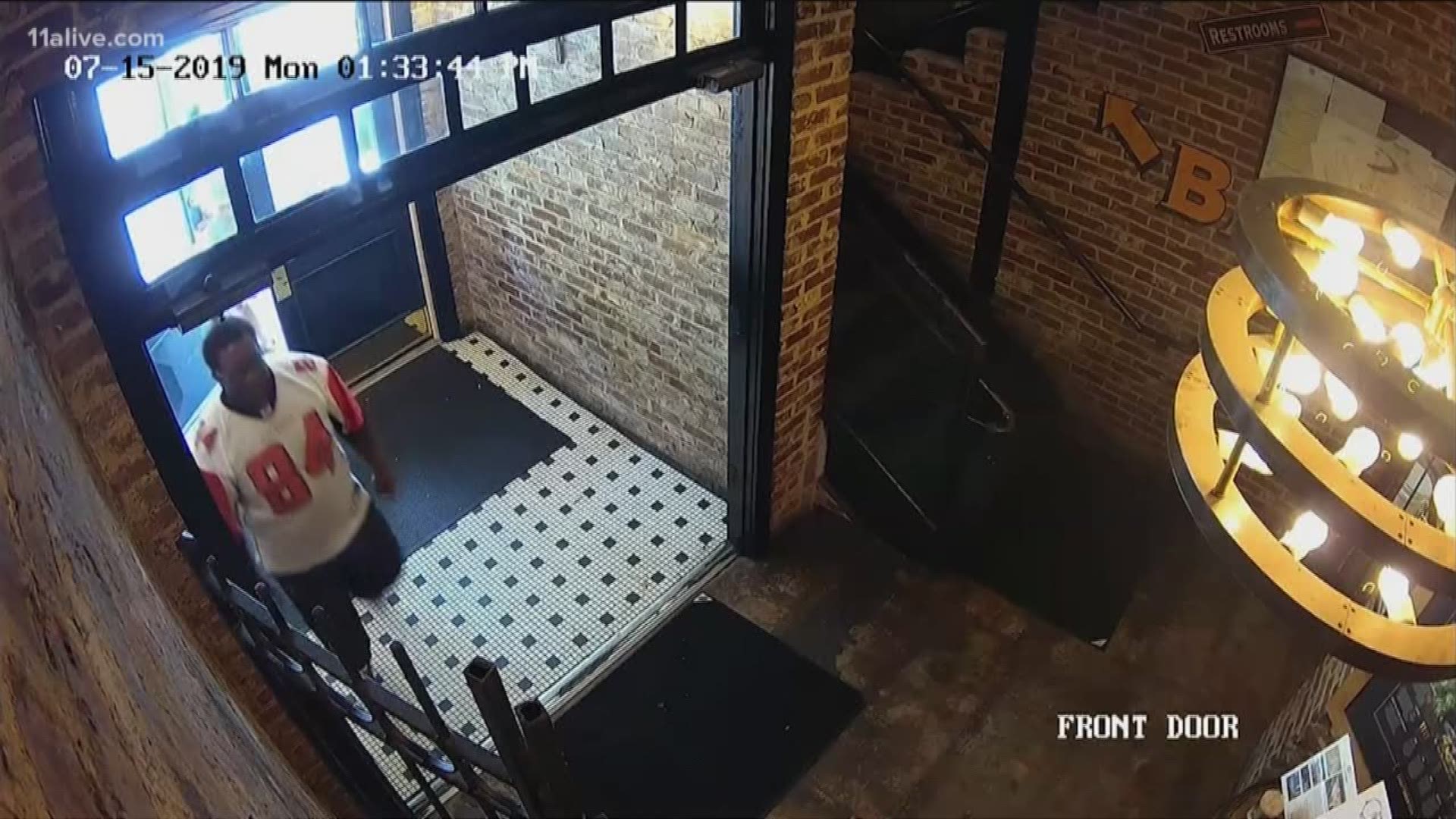 ATLANTA -- Atlanta Police are investigating after a woman claims she was robbed leaving an Atlanta restaurant Monday night. A stranger who witnessed the crime tried to help the victim track down the suspect, but they didn't have any luck.

Now, APD has released surveillance video and photos of the suspect; They've also issued a statement about accusations of a delayed response time regarding the 911 calls.

Here's what happened, according to the police report:

According to the police report, the victim had lunch at Max Lager's Wood-Fired Grill & Brewery and was standing outside the restaurant waiting on her Uber. The report said she put her black purse - which contained a laptop, wallet, and other items - on the ground as she looked for the car.

Shortly after, a man ran up to her and allegedly grabbed her purse. The victim told police she tried to take her bag back, but she fell, hurting her leg. Other witnesses on the scene said the suspect pushed her and took off running toward West Peachtree Street where a black SUV was waiting for him.

A woman in a white car approached the victim, explaining that she had witnessed the ordeal. The woman told her to get inside and they would go look for the suspect.

The women circled the block a few times but didn't find the vehicle, officers said.

The police report indicates a manager at the restaurant who happened to be outside taking a phone call, heard the victim screaming. The manager saw the suspect get in the SUV, but she wasn't able to get the license plate number. She lost sight of the car as it turned on Ivan Allen Jr. Drive.

Another manager at Max Lager's told police they captured the robber on camera inside of the restaurant.

On Wednesday, APD released a short clip where you see the man walk inside of the business.

In the report, police describe the video, saying you can see the suspect walk past the victim. Officers said you can also see the man when he walked outside of the restaurant.

The suspect was described as a black, heavyset man wearing a white Falcons Jersey with the number 84. Police said the suspect had on glasses, jeans and white and red sneakers.

11Alive was told there were several attempts made to contact police about the robbery. APD tells us it appears the victim called police twice regarding the incident.

"We understand the victim’s concerns regarding the response time on this call and we agree it was unacceptable," police said in a statement. Officers also added that further review will be conducted, and they are also looking to see if any improvement could be made to ensure response times are fast as possible.

In this case, APD said officers identified several factors that contributed to the delay, including higher priority calls that were dispatched ahead of this one.

Here's a portion of the statement from APD that explains what happened:

The initial review of this call confirms there was a significant delay from the time of the first call to the time an officer met with the victim. At this time, we have identified several factors that contributed to the delayed response, including higher priority calls being dispatched ahead of this call, the first responding officer diverting to a fight in progress and the second responding officer being unable to locate the victim. The first call came in at 1:35 PM and was dispatched at 2:08 PM. At this time, it appears we had several higher priority calls occurring and the officer initially dispatched ended up placing this call back in the pending to assist another officer on a fight in progress. The call was again dispatched at 3:29 PM. The officer arrived on scene and was unable to locate the caller. He requested that dispatch call the caller back. However, no one answered the call back and the officer cleared the scene at 3:53 PM. At 3:59 PM the same officer was requested to respond to the Zone 5 precinct where the victim was now located. The officer responded, met with the victim and took the report.

As for the suspect, police are hoping that someone will recognize him from the surveillance photos. Anyone with information about the case should reach out to the police or call Crime Stoppers.

Authorities: He schemed to start a fire at his business. A firefighter was hurt putting out the flames

Joycelyn Savage's family on no bond for R. Kelly: 'We look forward to feeling the full rays of justice'