Police said the two students were concerned about another student who they said was in "possession of a handgun." 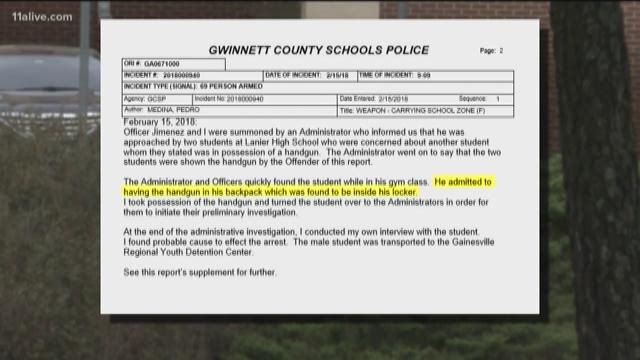 GWINNETT COUNTY, Ga. – A student is in custody after police say he brought a handgun to school and kept it in his locker.

On Feb. 15, Gwinnett County Schools Police said they were alerted by Lanier High School administration after two students brought the issue to their attention. Police said the two students were concerned about another student who they said was in “possession of a handgun.”

The students told administration the other student showed them the gun, according to the report.

Officials found the 15-year-old suspect in gym class and they said he admitted to having the gun in his backpack which was found inside his locker. Gwinnett Schools said the gun was not loaded.

He was then transported to the Gainesville Regional Youth Detention Center.

Following the incident, the Lanier High School sent the following message to parents:

As you know, we take our students’ safety very seriously at Lanier High

School. As principal, I wanted to make you aware of a situation that

occurred today. Our administrators received a tip that a student may have a

weapon on campus. We moved quickly to investigate and during our search we

did find that a student had a gun in his possession. In addition to

criminal charges for having a weapon on campus, the student also will face

News of a weapon on campus is unsettling for us all, especially in light of

the tragic events from yesterday in Florida. As you all know, we have

security measures in place at our school. However, we can never

underestimate the role we all-- students, parents, and teachers-- play in

school. Thank you to those who reported information about this situation as

it allowed us to address this quickly and efficiently. I encourage you to

safety. Thank you for your continued support.

A Gwinnett County Schools spokesperson would not say whether there will be any specific review of security at Lanier High School as a result of this incident. He emailed 11Alive News with details of the security plan already in place, system-wide, saying the school system is always reviewing ways to improve security at all of the schools:

Gwinnett County Public Schools is committed to providing a safe environment for students, staff, and visitors. We work closely with national, state, and local safety personnel-- police, fire, emergency medical services, emergency management agencies, and public health-- to ensure our schools are well prepared for an emergency. In addition, we never stop evaluating and looking for ways to improve our safety measures, policies and procedures.

There are a number of things we do to prepare for emergency situations...

School Resource Officers (SROs) are police officers employed by the school system. These officers are housed at all Gwinnett high schools and middle schools. We have 74 officers in all-- 2 at every high school and one at every middle school. Officers serve their home school as well as elementaries and other school facilities in the cluster. In addition to policing school campuses, these officers focus on educating students and staff on safety issues and working with school administrators on school safety plans.

In addition, GCPS updates its district and school emergency operations plans annually. These plans, which are approved by the Gwinnett County Office of Emergency Management, are the guides to help staff and our public safety partners respond swiftly should a crisis occur.

Each year, school administrators review and make any necessary modifications to their school's Emergency Management Plans.

Reunification plans are constantly being reviewed. These plans ensure that, in the event of an emergency, students can be evacuated to a safe place where they can reunite with their families.

Each school has key staff members with assigned roles and responsibilities during an emergency.

The school system's emergency response plan is modeled on the National Incident Management System (NIMS) that has been developed by the Department of Homeland Security.

Every school conducts emergency drills throughout the year so that students and staff are aware of the most effective and safe emergency responses.

We have and promote a confidential hotline that students and others can use to report concerns.

The district works with community partners— local law enforcement, the juvenile justice system, and emergency-response agencies— to ensure our schools are safe places to teach and to learn. For example, Gwinnett County Police and Gwinnett School Police have held several active shooter drills at our facilities and our principals have been invited to come and learn how police and emergency responders will react and respond should something happen in a school.

e-SPLOST funding provided for the installation of new video camera systems to enhance security in the common areas in all schools. More than 3,000 security cameras have been upgraded/replaced at high schools.

Security upgrades have begun at the middle school level.

The district also has partnered with Gwinnett County government to make security upgrades on school campuses. In addition, the county SPLOST provided emergency-response buttons in all schools (connected to the county 911 center and our school police headquarters providing video feeds of schools in case of emergency) and a visitor management system for all elementary and middle schools (buzzer systems that restrict access).

A host of programs and strategies in Gwinnett schools are aimed at stopping conflict before it occurs or escalates, and at discouraging risky behaviors. Many GCPS schools are recognized as leaders in the PBIS program. Positive Behavioral Interventions and Support (PBIS)

Age-appropriate programs address preventive measures for all students and interventions for those who have had a discipline run-in. Students learn about conflict resolution; anti-bullying techniques; how to say "no” to drugs, alcohol, tobacco, gangs, and violence; dealing with and

GCPS provides education options for students who need support, teaching them important lessons about choices and consequences while they continue their coursework. Programs like Project Rescue and the Gwinnett Intervention Education (GIVE) Centers put troubled students back on course to a diploma and future success, while addressing their behavior and discipline problems.

In addition to the measures listed above, we can never underestimate the role students, parents, and teachers play in keeping our school safe and in contributing to the overall success of our schools. Those who reported information about the situation at Lanier High School allowed our SROs to address the situation quickly and efficiently. The student now faces criminal charges for having a weapon on campus, and GCPS disciplinary action as well.