Eric Munchel, an ex-Georgia resident, and his mother Lisa Eisenhart, still a resident of the state, are charged in the Jan. 6 riots. 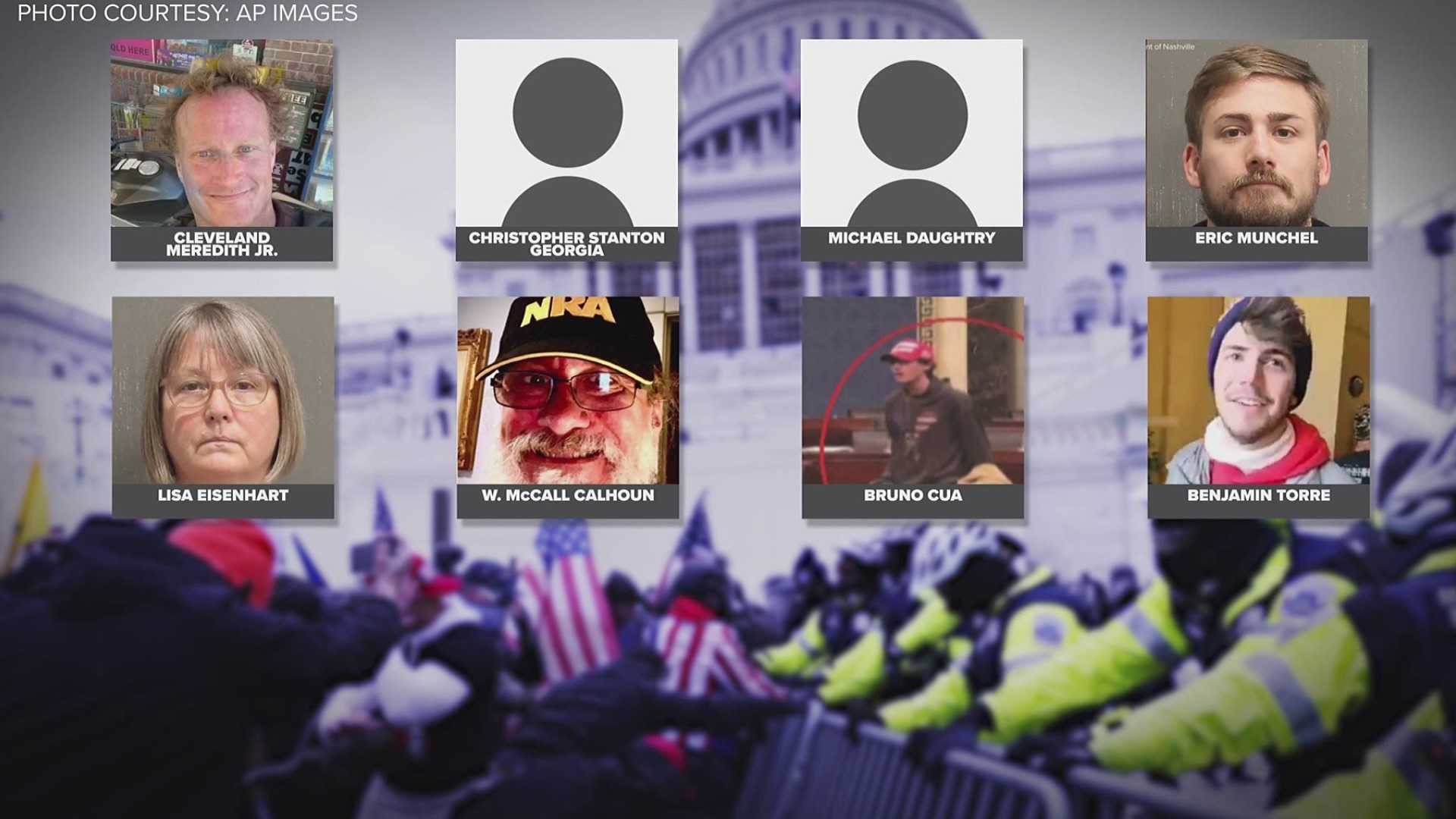 ATLANTA — The ex-Georgia resident known as "zip tie guy" and his mother, still a Peach State resident, will remain in federal custody over charges related to the Jan. 6 insurrectionist siege of the U.S. Capitol until a trial.

The order was made on Wednesday by U.S. District Judge Royce C. Lamberth, in the District of Columbia court, where most of the Capitol cases are being brought.

He ruled that Eric Munchel, 30, and his 57-year-old mother Lisa Eisenhart were to remain detained pending a trial "by clear and convincing evidence that no condition or combination of conditions of release will reasonably assure the safety of any other person and the community."

The order also noted the judge considered that the "weight of evidence against the defendant is strong" in ruling for the pre-trial detention, and that the pair will be "subject to lengthy period of incarceration if convicted."

"Defense counsel's portrayal of the alleged offenses as mere trespassing or civil disobedience is both unpersuasive and detached from reality. First, Munchel's alleged conduct carried great potential for violence. Munchel went into the Capitol armed with a taser. He carried plastic handcuffs. He threatened to "break" anyone who vandalized the Capitol. These were not peaceful acts," Judge Lamberth wrote in a memorandum opinion. "Second, Munchel 's alleged conduct occurred while Congress was finalizing the results of a Presidential election. Storming the Capitol to disrupt the counting of electoral votes is not the akin to a peaceful sit-in."

Of the mother, Judge Lamberth wrote: "Moreover, after the riots, Eisenhart indicated that she was willing to undertake such actions again. Her words were chilling:

This country was founded on revolution. If they're going to take every legitimate means from us, and we can't even express ourselves on the internet, we won't even be able to speak freely, what is America for? I'd rather die as a 57-year-old woman than live under oppression. I'd rather die and would rather fight.

"The Court takes Eisenhart at her word. She, like her son, invoked the American Revolution, indicating support for violent revolt. In fact, she even indicated that she was willing to give her life in support of her cause. Thus, Eisenhart too has indicated that she is willing to repeat her behavior. By word and deed, Eisenhart has supported the violent overthrow of the United States government. As a self-avowed, would-be martyr, she poses a clear danger to our republic."

A judge in Tennessee had previously ruled the two could be released, but that was reversed in each case by the District of Columbia district court.

They face identical charges of Obstruction of an Official Proceeding; Restricted Building or Grounds; Violent Entry or Disorderly Conduct; and Aiding and Abetting in relation to the events of Jan. 6.

Munchel became a notorious figure in the aftermath of the Capitol siege after being identified by investigators as the man who was carrying "zip tie" style handcuffs into the Senate Chamber.

Per charging affidavit, this is Eric Gavelek Munchel – the man federal prosecutors accuse of being the individual photographed with #ZipTies in the Senate Chamber – posing with a shotgun and American flag in front of an image of President Trump. #insurrection #CapitolBreach pic.twitter.com/0gf1TFrmcq

Munchel is alleged to have brought a stash of weapons with him into the Capitol on the day of the riots.

In his order, Judge Lamberth noted: "After the riots, Munchel indicated that he was willing to undertake such actions again. He compared himself - and the other insurrectionists - to the revolutionaries of 1776, indicating that he believes that violent revolt is appropriate.

" And he said '[t]he point of getting inside the building is to show them that we can, and we will.' That statement, particularly its final clause, connotes a willingness to engage in such behavior again. By word and deed, Munchel has supported the violent overthrow of the United States government. He poses a clear danger to our republic."