The suspect is described as a 6'5" slender black male wearing a mask, black pants, gloves, and a gray hoodie. 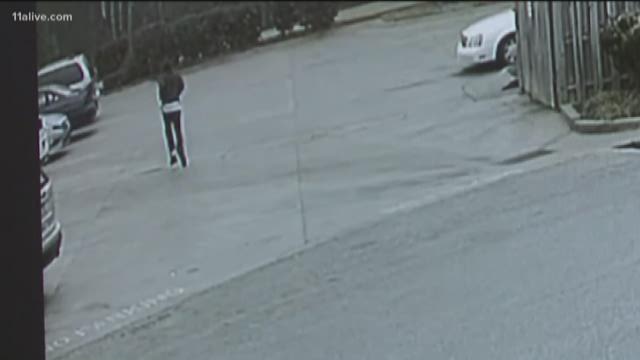 TYRONE, Ga. – Surveillance video shows the scary moments when a gunman fired a gunshot into a vehicle with three young children inside.

The incident happened around 8 a.m. on Monday.

Mike McKinney said he heard someone scream near the O'Reilly Auto Parks in Tyrone, Ga. He drove towards the voice to see if he could help and heard an employee shout.

That's when McKinney said he slammed his SUV into the suspect's car.

"I don’t remember running into him. I could’ve sworn up-and-down he hit me," McKinney said. "Once we hit, it literally knocked my phone out of my hand into the passenger seat." 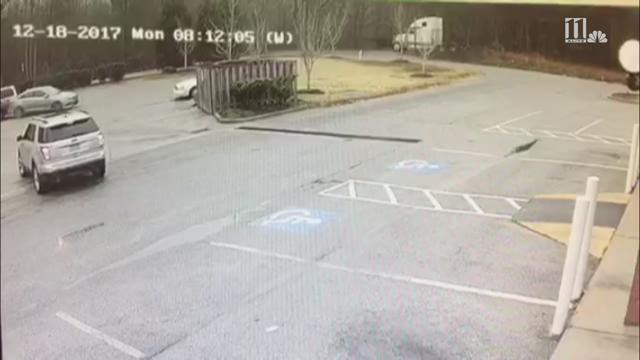 McKinney said he looked at the suspect and said he saw his expression go from fear to panic to desperation and then anger.

"I saw him reaching like he was trying to get something and I remembered instantly, 'get down, get down' I started yelling [to my kids]," McKinney said. "I was pushing the gas but we weren’t moving, I couldn’t get the vehicle to move for nothing."

McKinney, who had his three children in his Ford Expedition, backed up in hopes of catching the suspect's car.

"My intent was to grab my cell phone and pull out my phone as soon as [the suspect] passed by to get a video of his make, model, him and the color of the vehicle and the tag," McKinney said.

Instead, he got in the suspect's way. 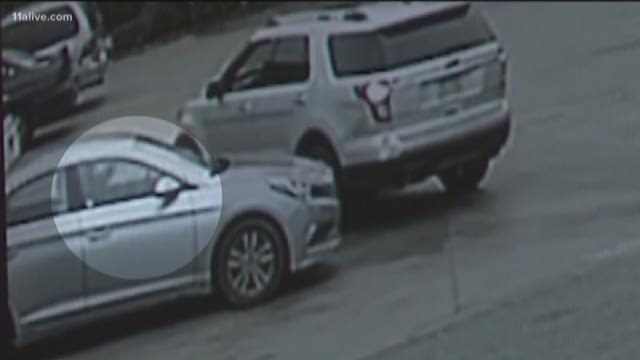 Surveillance video shows the suspect raise his arm and fire a shot into the back of McKinney's vehicle -- right where his three daughters were sitting.

"I seen him reaching like he was trying to get something and I remembered instantly get down get down I started yelling," McKinney said.

That bullet narrowly missed one of the three children in his back seat. McKinney said the bullet when through his 3-year-old’s car seat. He said it would have been a perfect head shot.

"The bullet went through her headrest of her car seat and out the other side," he said. "I was just thankful that I wasn’t having to plan a funeral."

Authorities said the suspect had entered the auto parts store through a back door and robbed it before encountering McKinney.

McKinney said he wasn’t trying to put his kids in danger.

"I was just doing the human thing of helping somebody that was calling help," McKinney said.

The employee of the auto parts store was not hit by a bullet.

Tyrone Police said the suspect got away but there should be damage to the front fender, the rear quarter panel on the driver’s side, and rear bumper on the suspect’s car.

There have been a rash of robberies in Tyrone including the two at O’Reillys, two at Dollar General and one at a Shell gas station.

Police said the suspect’s mannerisms and manner of speech seemed to match witness statements from the two other O’Reilly robberies in the area. The suspect is described as a tall slender black male wearing a mask, black pants, gloves, and a gray hoodie.

Officials want to remind people to never put themselves or family members in danger if you find yourself in or close to a crime. The suspect, in this case, did not show a desire to harm his victims until this recent incident.

If you recognize the vehicle or have information regarding this case, you are asked to call 9-1-1.