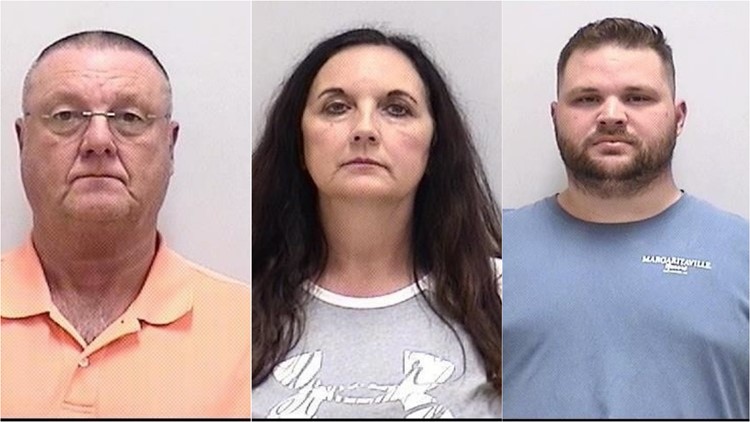 WHITE, Ga. — A former police chief, court clerk, and an officer - all family - have been indicted in an alleged scheme to extort several people, threatening severe charges and jail time if victims didn't comply.

As a result, each is facing charges for violation of the Racketeer Influenced and Corrupt Organizations (RICO) Act. The indictment alleges that between August 2009 and December 2017 the trio illegally profited from their positions by way of a scheme that involved issuing city citations and demanding high fines and fees - regardless of the actions of those being cited.

In doing so, the indictment said they illegally profited by negotiating fines to be paid on city citations so that more serious charges wouldn't appear on a person's criminal or driver history.

If the victims wouldn't comply, the three are accused of taking out state warrants and illegally imprisoning the victims in an attempt to intimidate others into falling in line.

The indictment alleges that Chief King willfully made false statements regarding crimes committed by victims and accused them of crimes they didn't commit.

The chief's wife, Richards, would then allegedly use her position, which carried the responsibility of collecting money paid to the city and depositing it in the bank, and use it to take money for her personal gain and that of her family. The indictment claims that she and King would collect the cash and Richards would deposit the money in the city's bank account.

However, the allegations claim that, on numerous occasions, the weekly deposits she made were missing money. During that same time, King allegedly made cash deposits into his own checking account.

She's also accused of illegally profiting financially through the use of an on-duty city employee that was working on Richards private property. At the time, Richards was billed by the water department as a residence rather than a commercial property. She is also accused of using points obtained by city credit cards to get gift cards.

During the time that King was chief and Scheff was an officer, the indictment says collected fines and forfeitures accounted for 20 percent of White's total revenue annually.

It also led to increased salaries for several years for both King and Scheff. Richards' salary also increased during the alleged scheme.

Finally, in November of 2017, Chief King ultimately lost an election for mayor of the city and the plan began to fall apart. The indictment alleges that in the weeks before a new administration took office, both King and Richards were seen destroying records and even deleted the water department's software from the computers.

The Georgia Department of Revenue also found that King had underreported his revenue and the indictment suggests he knowingly lied on his income tax return.

In all, the three are accused of numerous crimes that include theft by taking, theft of services, theft by extortion, false imprisonment under the color of law, tampering with evidence, violation of the Georgia Computer Systems Protection Act, false statements and writings and false swearing.

Following a lengthy state investigation, the case file was turned over to the district attorney's office in September.