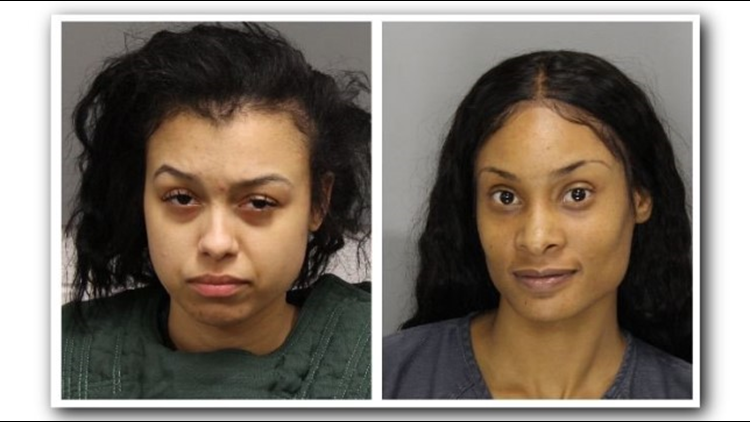 Photo by: Cobb County Magistrate Court
Jessica Zeno-Barrett and Lakeisha Renee Frasier are accused of breaking into a home and brandishing a gun in an effort to recover DVDs.

MARIETTA, Ga. — Two women are charged with charging into a man’s home in Marietta and attempting to steal DVDs at gunpoint – all in front of a young child.

Jessica Zeno-Barrett is accused of breaking into her uncle’s home on Windy Hill Road in Marietta on March 5 with Lakeisha Renee Frasier, along with another unknown woman. Police said Zeno-Barrett positioned herself behind the other women, who knocked on the door and acted as decoys to get into the apartment.

The person who answered the door was a 6-year-old boy, police said. The women pushed their way into the home and Zeno-Barrett demanded the DVDs that she said were promised to her. While the victim and his father begged for the women to leave, Zeno-Barrett became angry and ripped the DVD player off the TV stand in the living room, according to the police report.

When the man’s father tried to stop her, Zeno-Barrett pulled out a gun and pointed it at them, police said. In return, her uncle grabbed his firearm. The other women backed out the door and Zeno-Barrett fired one shot that hit the wall above her uncle’s head, according to police.  All of this was done in front of the boy.

Jessica Zeno-Barrett and Lakeisha Renee Frasier are accused of breaking into a home and brandishing a gun in an effort to recover DVDs.
Cobb County Magistrate Court

Zeno-Barrett has been charged with armed robbery, aggravated assault, first degree burglary-home invasion and third degree child cruelty. Frazier was also charged with armed robbery, aggravated assault, first-degree home invasion and cruelty to a child, third degree, for allegedly assisting the other woman in the crime.