A group with signs was seen marching in downtown Denver and chanting "no justice, no peace" before the protest escalated. 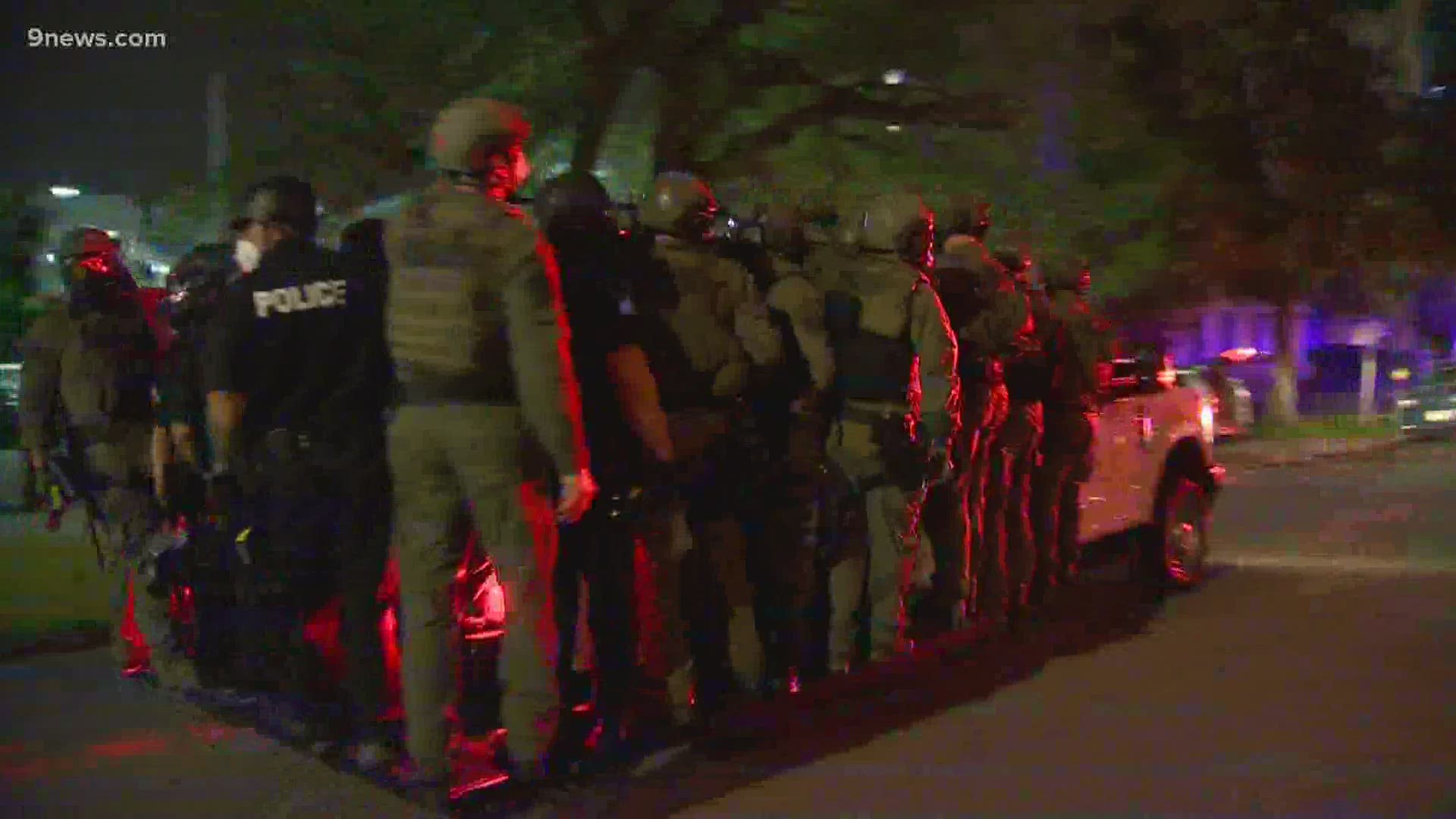 DENVER — A protest against the death of George Floyd blocked major roads and an interstate in Denver Thursday evening, and led Denver police officers to deploy tear gas in an effort to disperse the crowds that had marched through the city for hours.

Three officers were injured during the Denver protest and 13 people were arrested for charges ranging from criminal mischief to burglary to assault, city officials said during a news conference Friday morning.

"We will stand ready again to support peaceful demonstrations, but we will not tolerate violence and damage to personal and public property," Denver Mayor Michael Hancock said.

The Denver protest was a statement against police brutality after a video shared widely on social media showed a Minneapolis police officer standing on Floyd’s neck while he was heard saying “I can’t breathe.” This has led to protests across the country – including in Minneapolis, where crowds set fires and looted businesses.

In Denver, Sky9 video showed a crowd that had initially gathered at the Colorado Capitol separate into multiple groups. One of them marched down the 16th Street Mall and toward Interstate 25 via 20th Street, where they ultimately crowded onto the highway and blocked traffic.

The highway was closed at roughly 7 p.m., and reopened about 30 minutes later.

>>> The video below is a compilation of the protests courtesy Brett Forrest. 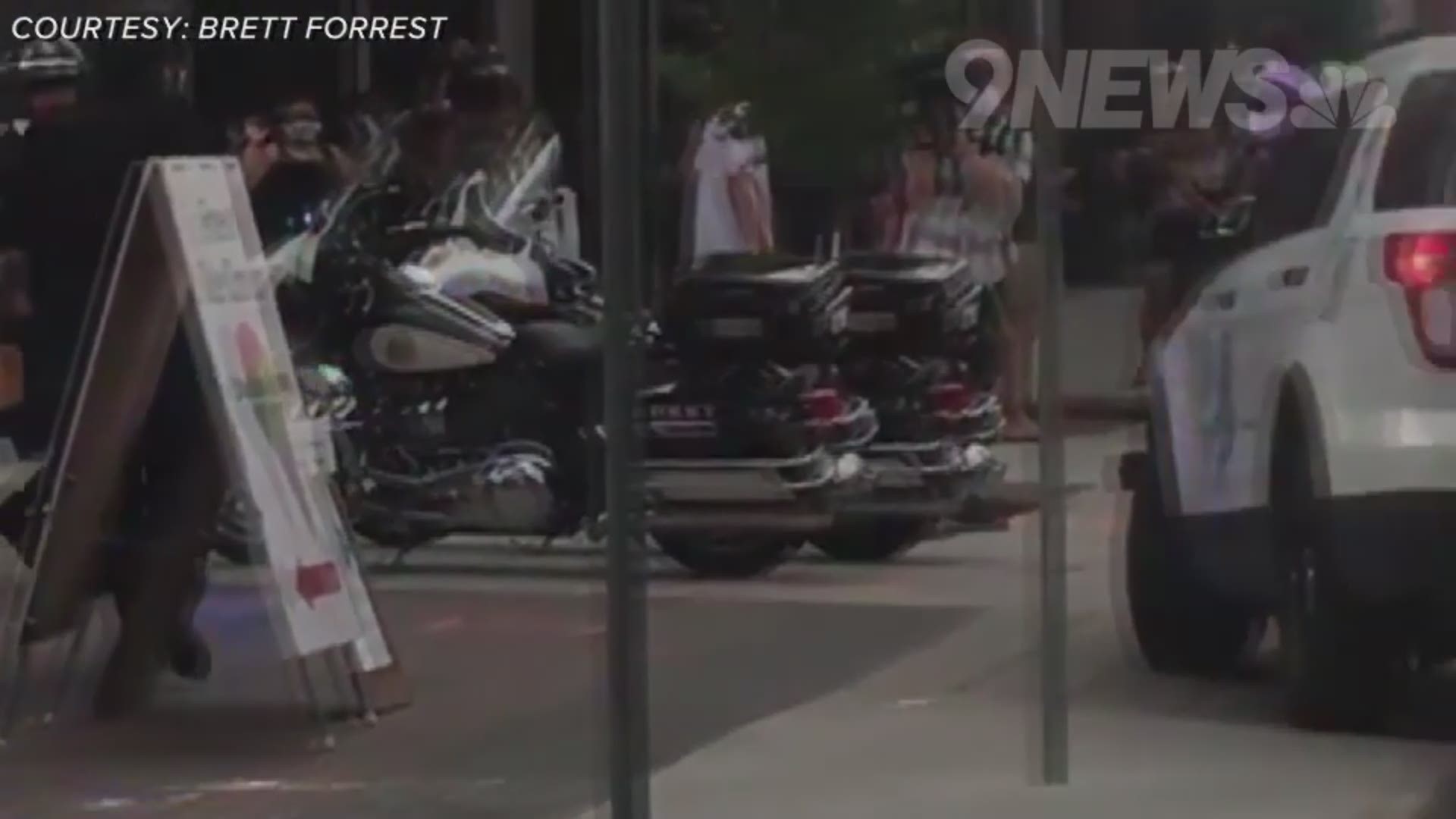 Another group stayed at the Capitol, where multiple gunshots were fired just after 5:30 p.m. At this point, Denver Police can’t say if this was related to the protests. State Rep. Leslie Herod (D-Denver) told 9NEWS she was told to run into the Capitol for cover.

RELATED: Shots fired near Colorado Capitol, no reports of injuries

Another video taken near the Capitol showed a driver apparently swerve in an effort to hit a protester. Denver Police said Friday they were aware of the video but had not yet identified either the driver of the vehicle or the man who was struck by the vehicle. 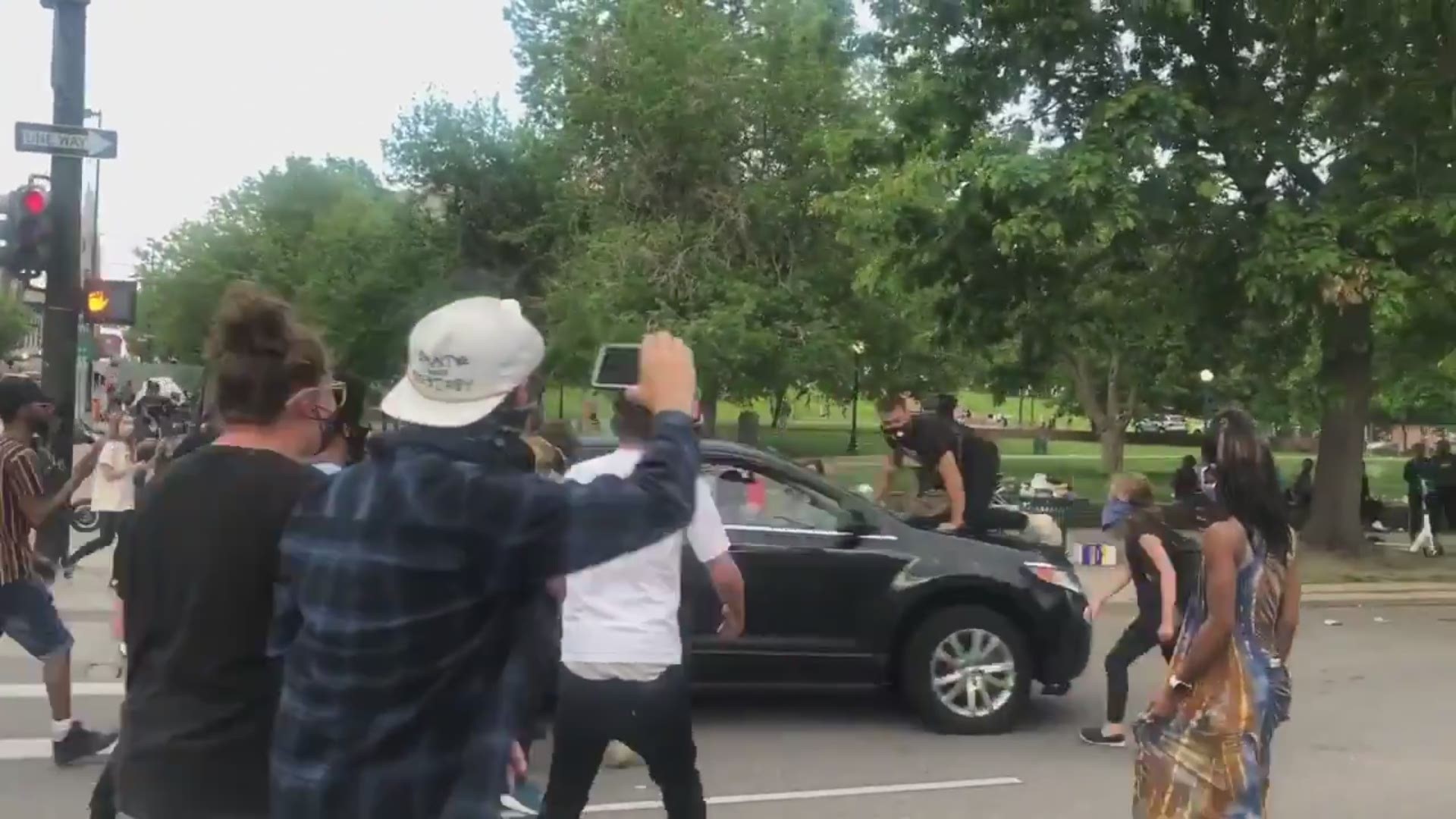 Graffiti was painted on the Colorado Capitol building, and a state patrol cruiser as well as a vehicle belonging to Democratic State Sen. Leroy Garcia had their windows shattered. 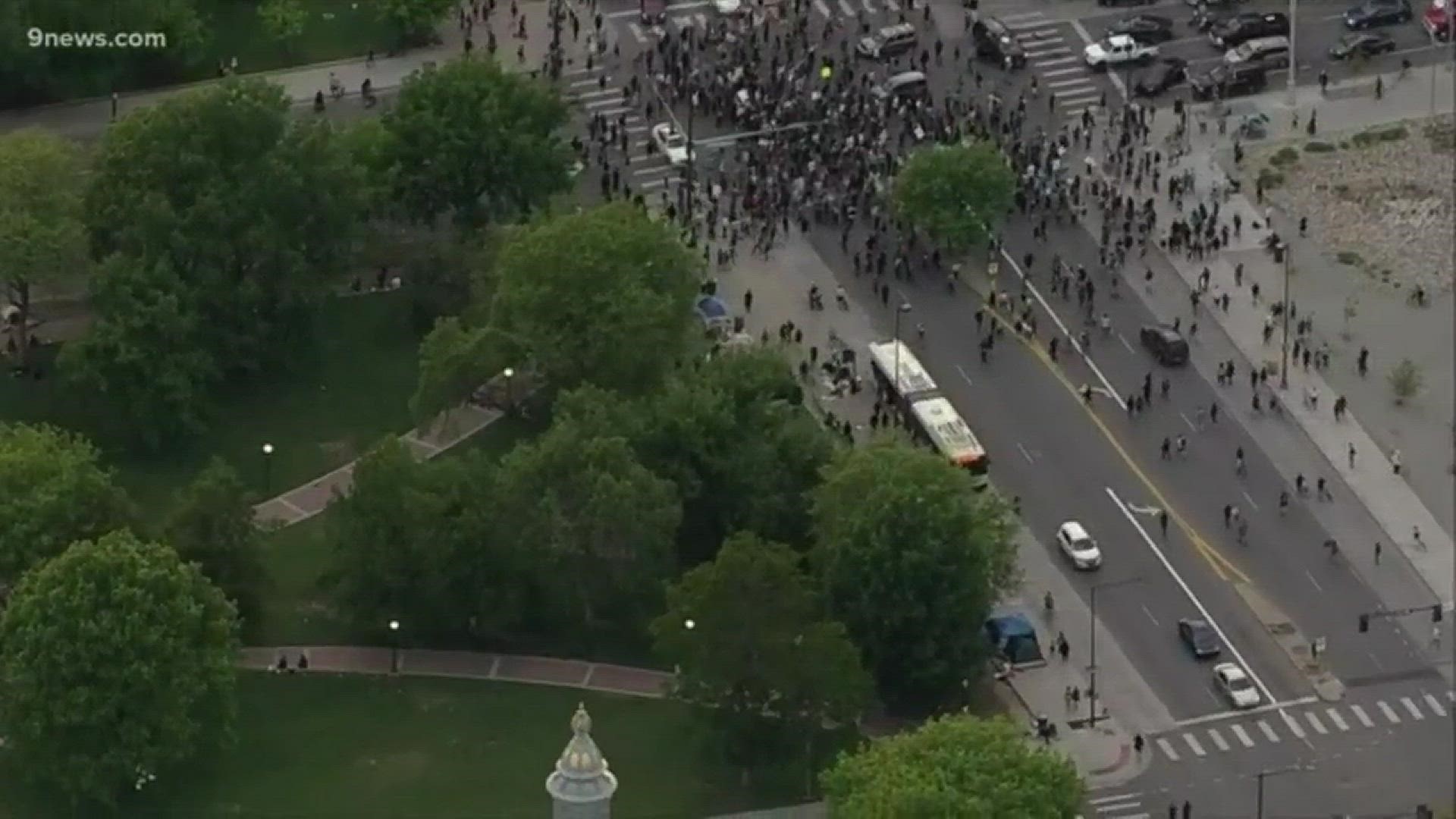 “You can be angry,” Hancock wrote. “You can be outraged.  I certainly am and I join you in those feelings and demands of #JusticeForGeorgeFloyd. March for justice and to see it served, but please march in peace. Responding to violence with violence will only lead to more violence.”

As the night went on, protesters moved to East Colfax Avenue, which was eventually closed in the area of Washington Street. Video from Sky9 showed Denver police officers in full riot gear deploying what appeared to be tear gas or another type of chemical round.

"We don't have a specific group that showed up that we can tie this to," Pazen added. 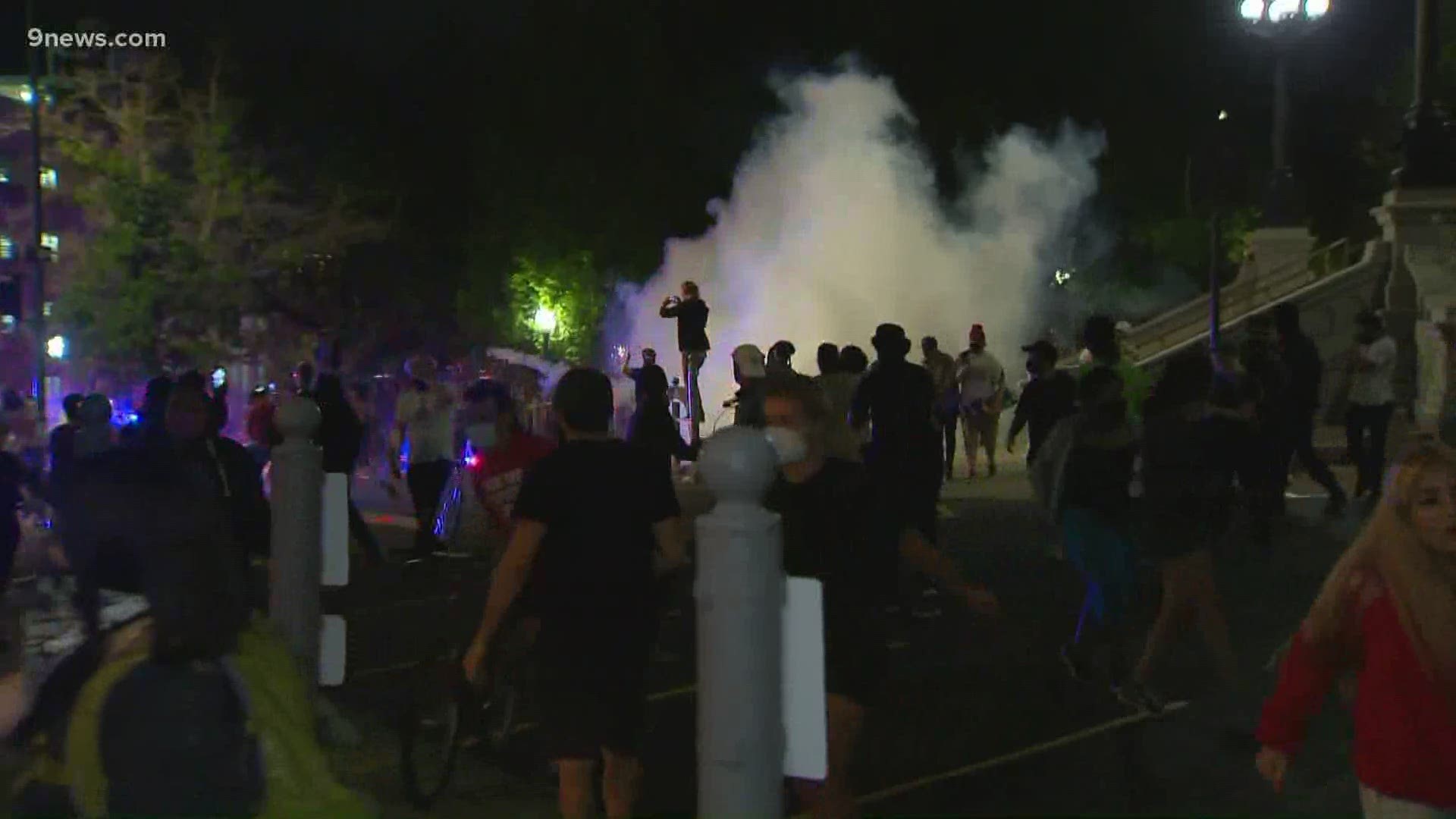 Though the crowd briefly dispersed, by 9 p.m. it had moved back to the Capitol, where 9NEWS Reporter Marshall Zelinger saw numerous cars with shattered windows.

Members of Colorado's state legislature have been locked in the State Capitol, where they were working on ways to solve a budget shortfall caused by COVID-19.

This protest happened while Colorado is under a safer-at-home order, which bars gatherings of more than 10 people in an effort to slow the spread of COVID-19. The Facebook event for the Denver protests asked people to bring face coverings as well as signs.

Photos from the march showed many protesters in masks, but others removed them as the night went on.

“Tonight is a very sad night for our state. While we are still uncovering all of the facts, a protest regarding the killing of George Floyd devolved into vandalism and violence, and I was absolutely shocked by video evidence of a motorist attempting to run over a protestor,” Polis tweeted. “Coloradans are better than this. I share the immense anguish we all feel about the unjust murder of George Floyd. But let me be clear, senseless violence will never be healed by more violence.

“These are extremely difficult times for our state, country, and world. Now more than ever we need to lift each other up and do right by each other. I ask everyone to make their voice heard peacefully and to turn their anger into advocacy and action -- never violence.”

By 10:30 p.m., DPD tweeted officers had reopened most roads in Denver, but they were still working to disperse smaller groups of protesters.

The four officers seen in the video of Floyd's death have been fired. The man seen pinning Floyd down was arrested Friday morning.

Credit: AP
This undated handout photo provided by Christopher Harris shows George Floyd. The mayor of Minneapolis called Wednesday, May 27, 2020, for criminal charges to be filed against officer Derek Chauvin, who is seen on video kneeling against the neck of handcuffed Floyd, who complained that he could not breathe and died in police custody. (Christopher Harris via AP)

“The Denver Police Department sends our condolences to the family of George Floyd. The actions and type of force used by Minneapolis police officers in the video are inexcusable and contrary to how we train our officers. Treating those we serve with respect is of the utmost importance to me as chief and those who make up the Denver Police Department. The Denver Police Department values the sanctity of life and is committed to respecting and protecting the dignity, safety, and rights of our community members. Recognizing that this practice needed to be put into policy, DPD implemented a revised use of force policy that includes community input, which increases officer accountability while emphasizing de-escalation tactics to reduce the need of use of force.”

Frey told 9NEWS sister station KARE11 that the maneuver used by the officer seen holding Floyd down was not one approved by the Minneapolis Police Department.