Jon Reese was a teacher for 25 years but was placed on paid administrative leave in 2017 and later resigned. 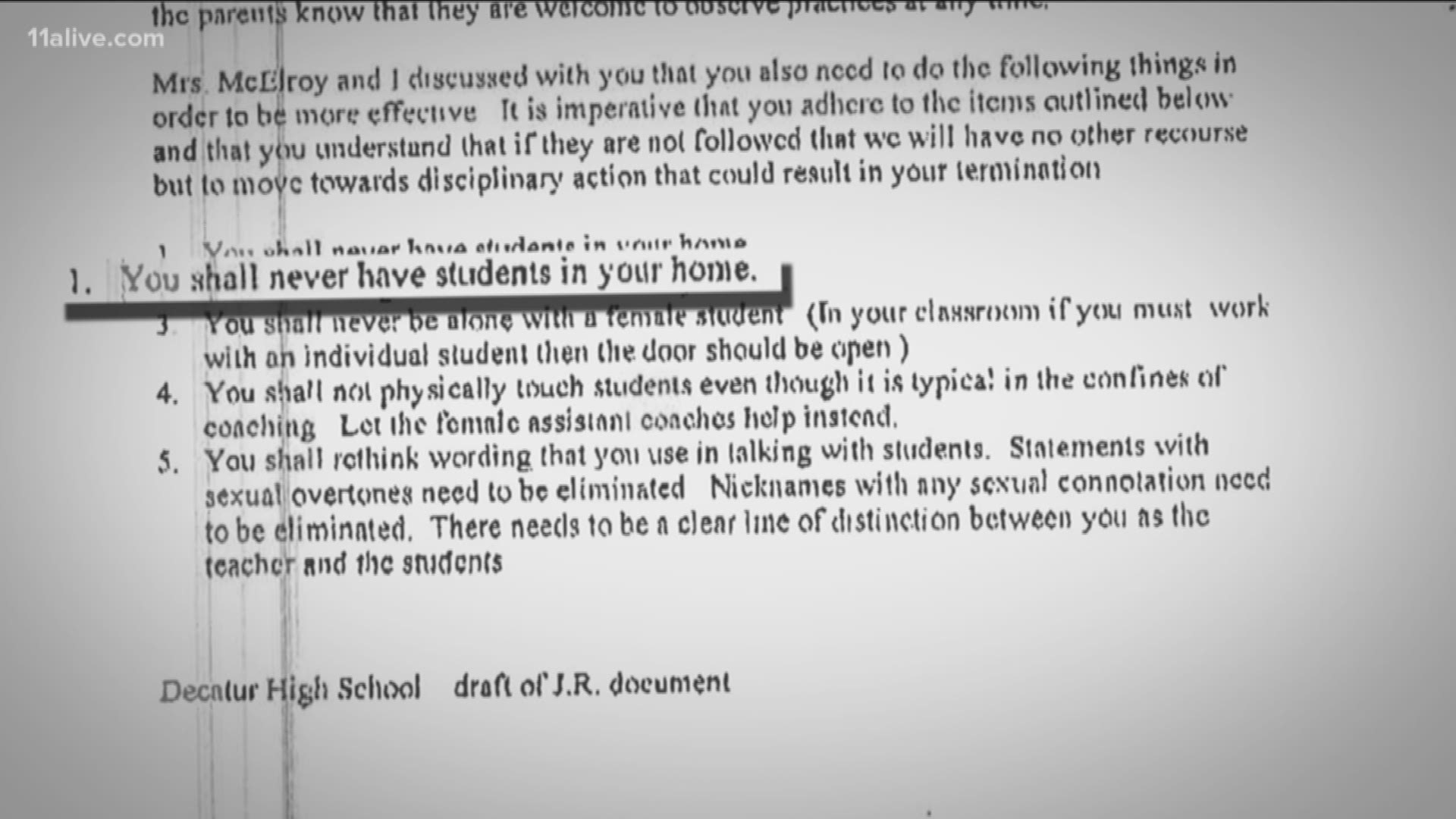 DECATUR, Ga. — A former Decatur High School teacher suspended for sexual harassment has his license back.

The move is raising concerns about whether he could return to the classroom.

Jon Reese was a teacher for 25 years but was placed on paid administrative leave in 2017 and later resigned. The City Schools of Decatur launched an investigation after an overnight field trip where he allegedly went into the doorway of the girls' room and several of them were not fully dressed.

Allegations against him, according to school documents, date back to the 90s.

A letter in Reese's file dated almost 19 years ago from the school's former principal to Reese spells out some of the allegations. One claim is that Reese referred to one of the soccer players he coached as his favorite "STD". There are other instances where Reese allegedly had students over to his home.

The principal said in the letter she told the superintendent and was asked to contact the police, but the police stated they couldn't do anything unless the student was willing to talk to them. The letter also said Reese was told to never have students in his home, not give rides to students in his car, never be alone with a female student, not physically touch students, rethink wording when talking with students and eliminate any nicknames with sexual connotations.

The letter said if he did not follow those guidelines "we will have no other recourse but to move towards disciplinary action that could result in your termination."

Other documents show students saying they were uncomfortable around Reese, allege he told sexual jokes, others claiming Reese was "known for giving shoulder massages."

Reese declined an interview, but sent 11Alive a statement:

"In July 2017, the Professional Association of Georgia Educators assigned me an attorney who helped me take steps to protect my teaching certificate. The attorney who represented the state initially agreed with my attorney that the case didn't warrant an extended suspension. She proposed that a 10-day suspension would be appropriate to recommend to the Professional Standards Commission. The commission rejected that, so we continued to prepare for a hearing. Last month, the commission approved her revised consent order that stated that 'the respondent was accused of being unprofessional in his supervision of students.' I accepted the order's 30-day suspension to avoid the anxiety and hardship that a hearing would have likely caused others who would have been called to testify and me. I was relieved to move past the drawn-out uncertainty, and I have no intention of returning to classroom employment."

My teaching career was a true calling, and my student journalism staffs were my passion. This loss has been devastating and humiliating. To realize that I caused pain in the midst of experiences I valued, with students I highly respected, has shaken me deeply. I am very sorry for the ways my words and behavior negatively impacted students"

This week, Decaturish.com  published a letter from Reese where he said his priority is to address the pain he has caused - asking former students and parents to share their experiences with him - posting his email address, asking for them to "write in a spirit of compassionate accountability."

Reese is not facing any criminal charges.

One year since Timothy Cunningham went missing, his legacy in Atlanta quietly builds