"These kids did nothing wrong ... we can debate these issues in a fair way and leave the kids out of it," said Edward Ahmed Mitchell from CAIR-Georgia. 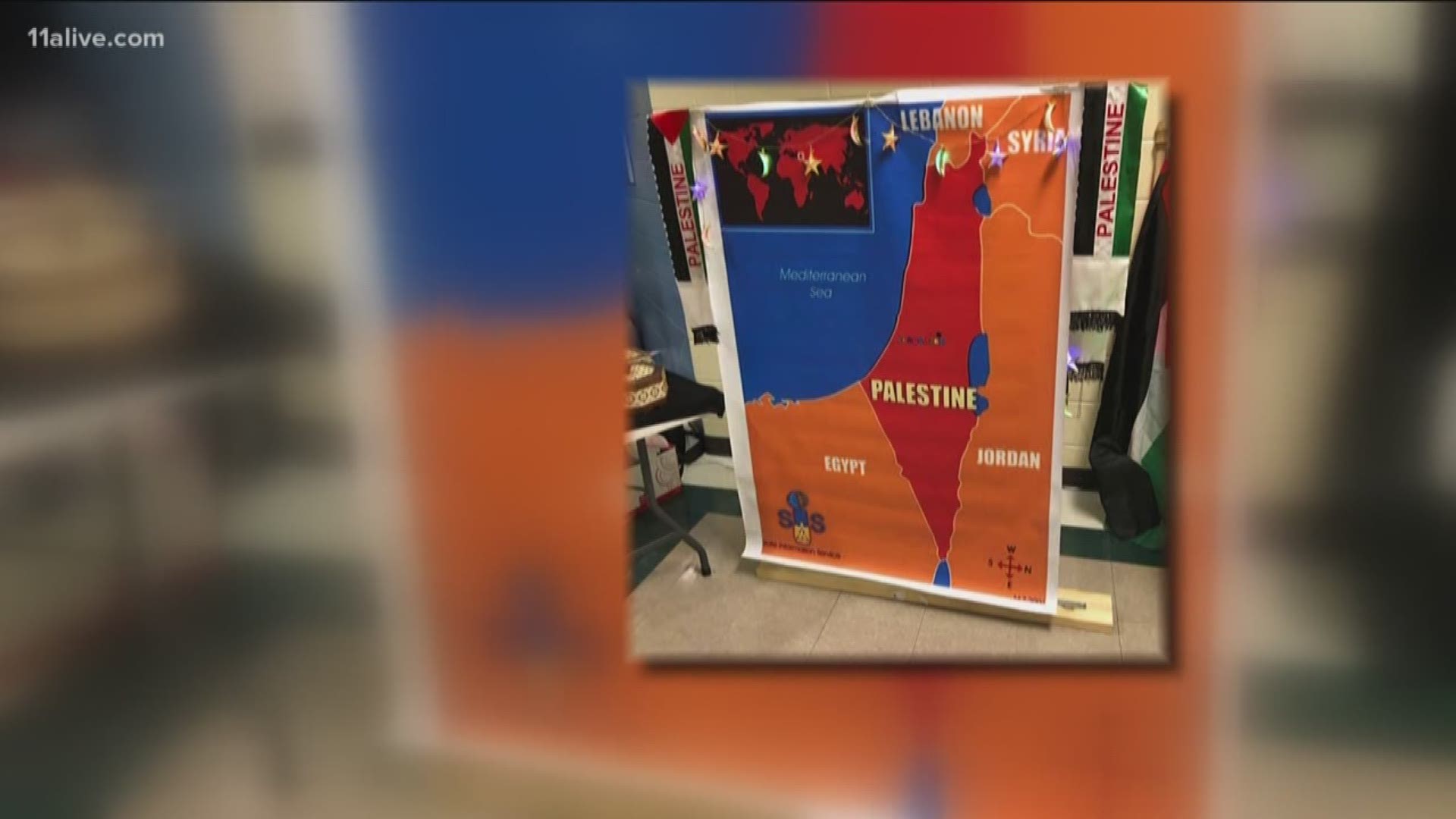 ALPHARETTA, Ga. — Reaction to a map on display during a multicultural event at Autry Middle School has caused several students to be bullied and harassed online, according to a release from the Georgia chapter of the Council on American-Islamic Relations (CAIR-Georgia).

The map showed Palestine where present-day Israel should be. Several Israeli and Jewish parents said it was highly offensive, stating in emails sent to 11Alive that it appeared the school was taking a clear side on the long-time Israel-Palestinian conflict.

“Over the past week, the students have experienced bullying and online harassment as a result of false information that has been spread about an educational exhibit on Palestinian history that they displayed at the school’s annual Multicultural Night both this year and last year,” a release from CAIR-Georgia stated. The district has not confirmed that any students have experienced bullying due to the map.

Representatives from CAIR-Georgia, Jewish Voice for Peace-Atlanta and local Palestinian Christian reverends addressed the media Tuesday on behalf of several students from Autry Middle School and their families.

During the press conference, the group explained that the exhibit was part of a family cultural presentation.

"Instead of gathering more facts, the school sent out a public statement condemning the exhibit .... over 300 people saw it, partook in the food and no one complained the night of the event," said Edward Ahmed Mitchell from CAIR-Georgia. "The action taken on the part of the school turned what was a simple misunderstanding into a public spectacle."

Mitchell said his group has heard of sixth, seventh and eighth graders being harassed and bullied online since the story went viral last week.

"This has put a target on the backs of young Palestinian-American kids and Muslim kids and anyone who looks Muslim at that school," Mitchell said.

He also noted that the school also had an Israeli cultural display that was "nearly identical" to the Palestinian display.

"It actually included a map of Israel that was broader than what our own government recognizes as the Israeli borders," Mitchell noted.

The multicultural event was a way for students to show off their family histories and included food and cultural items from nations around the world.

"The (Palestine) map was meant to depict the Palestinian and family history, the real history of Palestine from 1920 to 1948 under the British government. This is the time period those children's grandparents actually lived there," Mitchell said.

Susan Hale with Fulton County Schools confirmed that the school's principal will be meeting privately with students and parents who have asked to talk about the topic. She issued the following statement on behalf of the district:

"Fulton County Schools values the different cultures of our students and communities. Throughout the year and in various forms, FCS schools hold a myriad of events that celebrate diversity, inclusivity and respect for all. FCS schools welcome the cultures and groups that make up the individual communities to participate in these events.

"FCS district leaders and local administrators are working with individuals, parents, students and groups at Autrey Mill Middle School on a personal and individual basis, in an effort to create a better understanding of different cultures."

Parents who attended the event told 11Alive on Friday that the map was concerning. They agreed to speak anonymously, since their children attend the school.

Mitchell said on Tuesday that they weren't trying to be critical of everyone and that CAIR-Georgia is planning a sit-down meeting with the Autry Middle School principal and the district superintendent to discuss the situation.

"Everyone has a right to celebrate their history," Mitchell said. "We can debate this in a fair way and leave the kids out of it. Middle school kids don't need to be debating Israel and Palestine in the media .... We see this as an opportunity to build bridges and turn this into a teachable moment for all involved."

The conflict over the land goes back decades with both sides arguing over who owns rights to it.

Speak to a Palestinian American about the map and you can find a different viewpoint.

Reverend Fahed Abuakel, an Arab American who has lived in Atlanta for the last 50 years, said the state of Palestine existed on the land until 1948. He believes students should learn the land's history.

"During Autrey Mill Middle School's annual Multicultural Night, the school welcomes students and their families to set up exhibits featuring food, artifacts, and other symbols of their diverse cultures and countries of origin.

"Over the past two years, Palestinian-American students and their families have participated in the multicultural event by arranging a popular exhibit featuring Palestinian cuisine, Palestinian flags, and a map of historic Palestine, among other symbols of Palestinian culture.

"School officials approved, visited, and praised this exhibit both this year and last year. The principal even sampled food from the booth. However, the school condemned the exhibit the very next day because an individual posted a partial photo of the exhibit on social media, leading to criticism.

"Much of the criticism has centered around a map of the Middle East which showed the State of Palestine where the State of Israel normally appears.

"If Fulton County Schools had simply followed up with the students or their families, the district would have known that they were not using the map to represent a fanciful depiction of a future Palestinian state.

"In reality, they were using the map to show the past: historic Palestine as it actually existed under British governance from 1920 until 1948, which is when the Palestinian grandparents of these Autrey Mill students were expelled from their homeland.

"In other words, the map depicted a real part of their family history and Palestinian history, not an attempt to engage in political or religious commentary.

"Furthermore, the school did not object to a prior exhibit about Israeli culture that included a map depicting a broader Israeli state encompassing East Jerusalem, the West Bank, and the Gaza Strip, all of which are designated by international law as Palestinian territory.

"By publicly condemning these students before gathering the facts, Fulton County Schools validated an online smear campaign, turned a simple misunderstanding into a public spectacle, undermined the guarantee of free speech, and put a target on the back of the school's Palestinian-American students.

"The school system must now take three steps to end this manufactured controversy:

"Apologize for its premature and misleading statements of condemnation, which have led middle school students to experience bullying, online harassment, and public attacks, including accusations of supporting 'terrorists.'

"Retract its threat to take action against the students, who did nothing wrong. The school cannot punish students for what the school explicitly allowed them to do, nor can the school permit speech about broader Israeli borders while suppressing speech about past Palestinian borders. To do so would violate the Constitution, and undermine our educational system.

"Finally, the school must protect these students from further bullying, and heal the community. To that end, the students and their families are willing to meet with school officials and concerned community members to clear the air, build bridges, and move forward in a positive way."