Several times during the meeting, arguments broke out in the crowd, as many people from opposing sides yelled at each other. 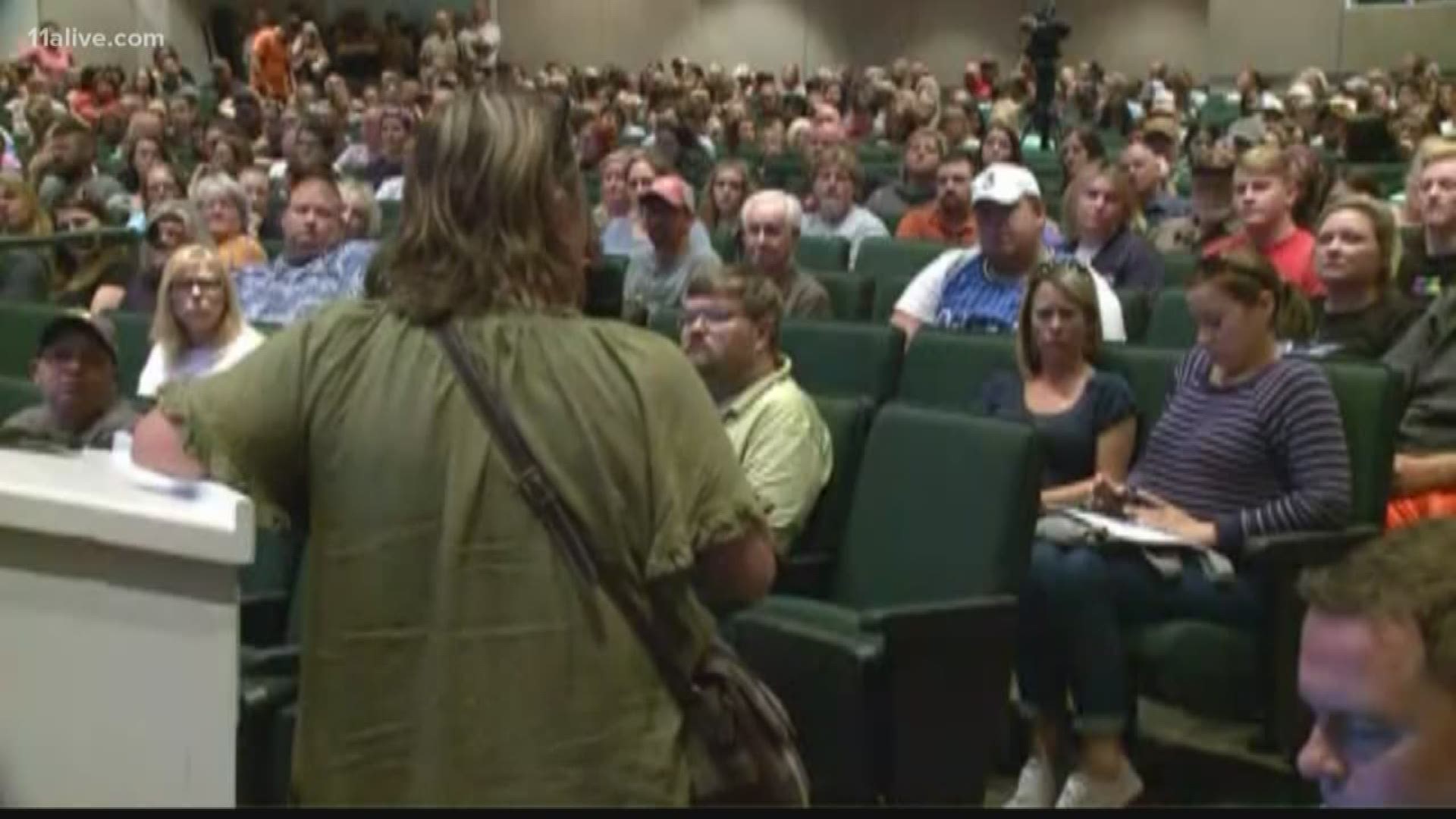 PICKENS COUNTY, Ga. — Calls for the Pickens County superintendent to reverse a new rule, resign or be voted out of office were heard throughout Pickens High Monday night.

Emotions were high in a packed room of 600 people as they discussed the Pickens County School District’s decision to consider allowing transgender students the right to use the bathroom of their choice. Superintendent Carlton Wilson opened the two-hour meeting, laying out the punishment for abusing the new rule. If any student goes into a restroom or makes a false claim of being a transgender student, they would be suspended for the school year, including school dances and graduation.

In addition, the superintendent said if anyone was found making threats on or off school property or on social media, it would include suspension for school year and all activities including prom and graduation.

Close to 50 people gave passionate speeches on both sides. Many were concerned over the fear of a male student pretending to be a female and walking into the girl’s restroom to possibly assault a female student. Most of the speakers said the new rule can’t be policed well enough to protect everyone.

“Before, if you were a man walking into the woman’s bathroom, I could say, 'wait hold up!' But now if you walk into the gender-neutral restroom, I don’t have the right to question you,” said Alicia Watkins.

Several parents wanted to know whether the rule would stop at bathrooms or extend to locker rooms, football and basketball stadiums in the county.

Superintendent Wilson asked parents to remember each student is a child with the right to be listened to, nurtured and loved.

Those who opposed the new rule brought up safety and religious concerns, as well as non-transgender students being labeled bullies for not agreeing with the decision.

Nathan Barfield, a father of two, called it a political stunt.

“I would never in my life use a restroom in which a female is in,” he said, to which most of the auditorium stood up in applause. “No person’s rights are more important than anyone else. My son has a huge heart and he doesn’t want to say anything for fear that he is going to be labeled a bully.”

Several parents asked that the rule be returned to when students were asked to use the bathroom of the sex they were assigned at birth, while making accommodations for transgender students.

“You should be able to use any restroom that you want to use,” Kayla Hollyfield rebutted. "This is not about left or right. It’s about equal rights. It’s not an agenda."

Hollyfield said transgender people being allowed to use the restroom of their choice is closer to becoming a reality across the county. She urged the board and parents to accept the decision, as well as trans students.

“The safety of our children is to do this in the most loving, equal, best way possible," she said. "This is going to happen. This about love, not about separation, only going backwards. Let’s move forward.”

Many questioned Wilson’s decision to enforce the new rule. The superintendent incorrectly stated to a television station that the new rule was being mandated by law. He apologized at the start of the meeting, but some did not quietly accept his explanation for the new rule.

Several times during the meeting, arguments broke out in the crowd, as many people from opposing sides yelled at each other or tried to yell over each other as they spoke.

A local pastor stood up to ask the board to look at the crowd, the majority of whom oppose the new rule, and said the board should listen to the majority.

“Otherwise, you are bullying us!” he yelled.

Jordan Stewart, a Pickens County High School graduate, said he came out as gay during his junior year and was faced with bullying and discrimination.

“Imagine what it’s like for transgender students,” he said, before adding, “By the way, a trans woman is a woman, a trans man is a man. You’re a man walking into a bathroom with other men. People are trying to do their business, get in and get out. That’s it.”

Others were concerned over students getting assaulted in bathrooms, which could also possibly result in the school district being sued for not keeping students safe. However, Wilson said one of the reasons they decided to enforce the new rule is to avoid being sued by transgender students who were denied access to the bathroom with which they identified.

Wilson said nothing is set in stone and a policy has not been officially set. He told 11Alive he would take everything discussed during Monday night's meeting and make an official decision in the next couple of days, though he did not give an exact date. He also did not reveal which way he was leaning with the policy.

Robert Olsen found not guilty of murder in killing of Anthony Hill; guilty on other counts