According to the incident report, many people at the scene told deputies they were there for a college party. They also said they were drinking alcohol, but no drugs were involved. 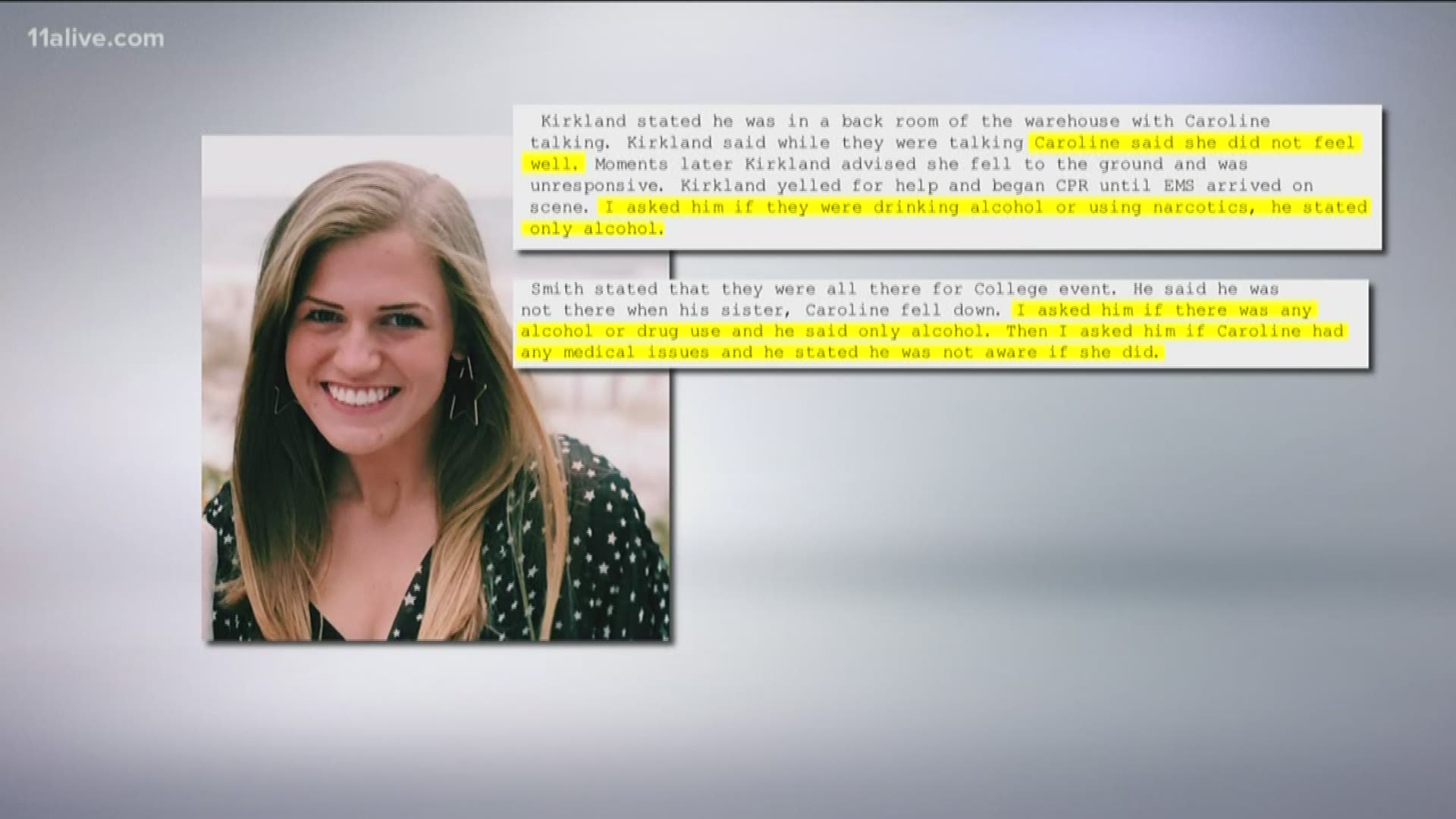 More details surrounding the death of a South Carolina college student from metro Atlanta have been released.

At the scene, authorities talked with Smith's brother, who is also a Furman student, and her boyfriend.

An incident report from the Beaufort County Sheriff's Office states first responders were called to Enterprise Lane in Hilton Head for an unresponsive female around 11:50 on the night of April 5.

The incident report said many people at the scene told deputies they were there for a college party. They also said they were drinking alcohol, but no drugs were involved.

The EMTs found Smith near the side of a building by an overhead garage door. Smith was lying on her back.

Deputies said the EMTs worked on her for several minutes, but their attempts were unsuccessful. She was pronounced dead at the scene.

Smith's boyfriend told authorities he was in a back room at the warehouse with her talking when she told him she didn't feel well, according to the incident report. Moments later, she fell to the ground. He yelled for help and did CPR until the EMS arrived. The incident report said the deputy asked if they had been drinking or using narcotics, he said only alcohol.

Smith's bother said he wasn't there when she collapsed. He told deputies she didn't have any medical issues.

While the cause of Smith's death is still unclear, the university said it's gathering information and cooperating with authorities.

On Monday, Vince Moore, Director of News and Media Relations for Furman, confirmed the students traveled to Hilton Head to attend a Kappa Alpha fraternity formal.

The event was scheduled for Saturday night. However, the university was informed of Smith’s death early Saturday morning and the event was canceled. The students who went returned to campus. Moore said the Division of Student Life was aware of the formal, and that the fraternity had gone through the proper channels to schedule it.

Smith was a member of the Kappa Delta sorority. Smith is a 2017 graduate of Marist School, which is located in metro Atlanta. The schools' president, Father Bill Rowland, released a statement about Smith's death:

"All of us at Marist School were deeply saddened to learn of Caroline’s passing, and our heartfelt prayers go out to Caroline’s family and friends. Many of our students, teachers, and coaches remember her fondly and feel blessed to have known her. Of course, that makes her loss all the more keenly felt. The Marist School community pulls together in situations such as these. After school today, we’ve invited our community to gather in the chapel for a time of quiet prayer. Our campus ministry and counseling offices are providing ministry and support and also the opportunity to share a memory or write a note to the family. As a faith-filled school community, we present Caroline to Christ the Good Shepherd who will escort her to her heavenly home where there will be no more tears. We eagerly await the day when we will be reunited with her. Until then, we pray, at times with tears, for Caroline, her family, and friends, along with the faculty and students at Furman University where Caroline was a sophomore and with whom we share this loss.”

Furman University officials said they are focusing on helping her family and the campus heal. They plan on sharing information about her memorial services when they are scheduled.