Georgia Milestones results show gains | See how your school did 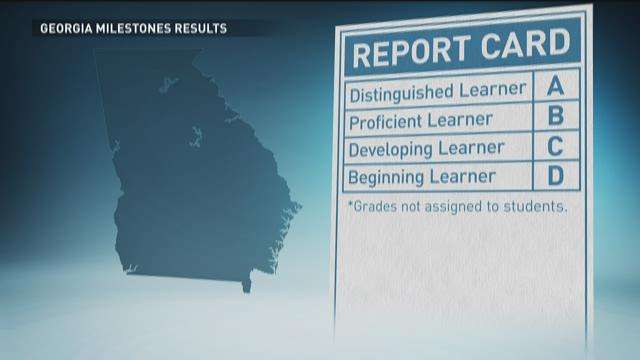 The results, released Thursday morning, show progress. State Superintendent Richard Woods acknowledged that there was still work to do.

"We are making progress and that progress will continue as we refine our focus on the services and supports schools need to provide the best possible education for all students," Woods said.

This is the third year of test results since the Milestones plan was implemented in the 2015-2015 school year.

Instead of a reliance on scores, Georgia Milestones results focus on academic progress and rank students in four different categories.

Beginning Learners are level 1 students. They require substantial academic support because they are not proficient on the skill, according to state standards.

Developing Learners are level 2 students. They are on track to being proficient on the skill, according to state standards, but still require extra academic support to be successful.

Proficient Learners are level 3 students. They meet state standards and are on track for the next level or course. They are considered on track to be college and career ready.

Distinguished Learners are level 4 students. They are considered advanced and more than ready for the next level or course.

According to the State Board of Education, the percentage of students who are proficient learners and above either increased or stayed the same in the majority of tests across all grade levels.

This year, more scores increased than decreased statewide, meaning more students overall improved than digressed. Unfortunately, there were some schools who had their scores decline.

Check your school's results in each subject matter

The tests determine if third, fifth and eighth grade students move to the next grade.

The first time students took the test was in 2015. The results served as a benchmark and didn't count for or against students. In their first year, results showed that few students performed well.

When students took the tests in 2016, districts complained of computer glitches and problems with administering the test. There were enough problems that the state school board voted to void the results as a factor in promoting students in those key grades.

About three years ago, Georgia did away with the old Criterion Referenced Competency tests or CRCT and graduation tests and replaced them with a harder tests. For years, Georgia was criticized for offering easy tests.