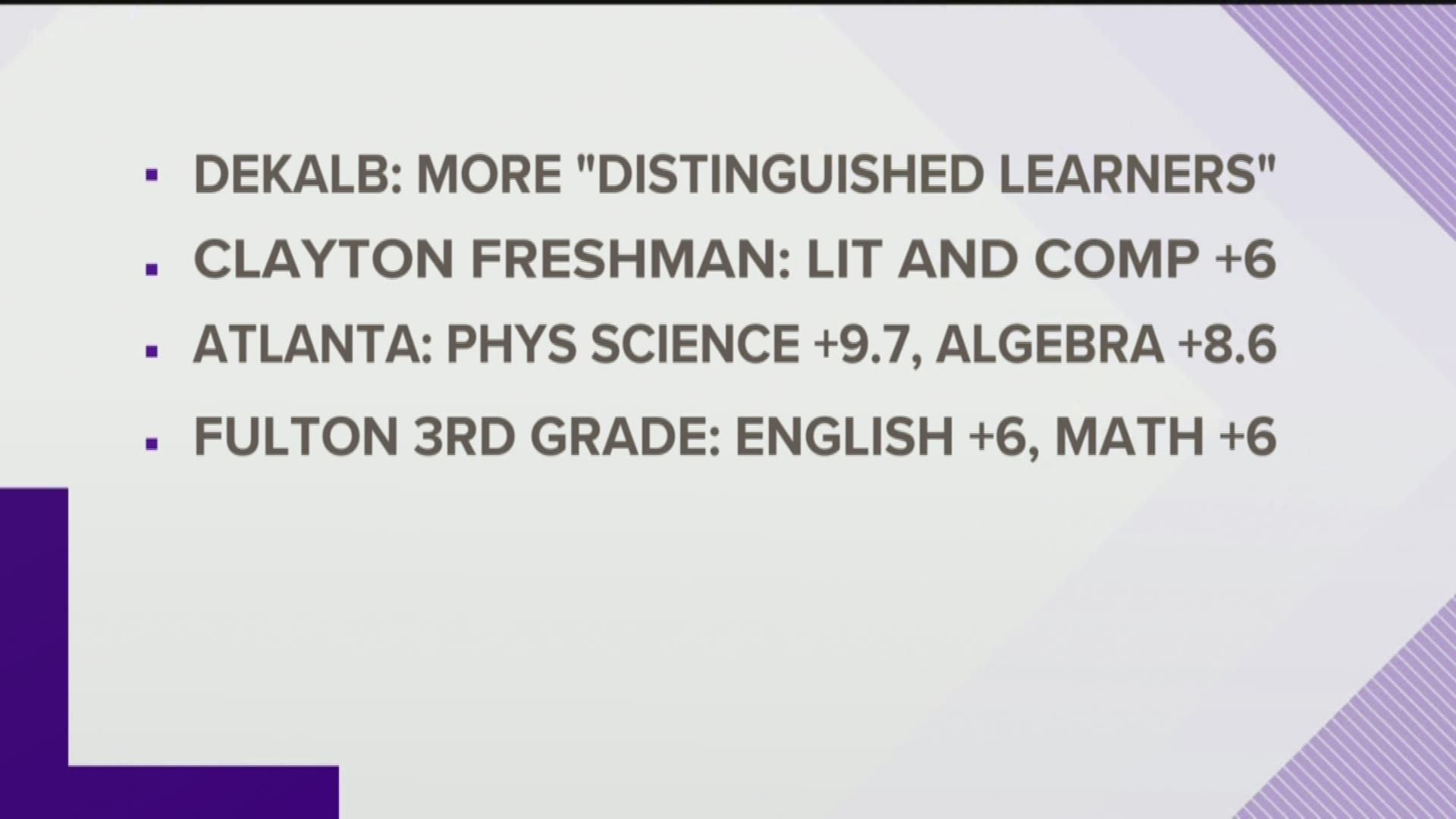 ATLANTA — More Georgia students are on what the state considers “college- and career-ready” and many are progressing out of the state’s lowest categories for standardized testing, Georgia Milestones results released on Friday show.

It also showed that students of all levels continue to lag behind that level in disciplines like math and science.

The state Department of Education said that, compared to 2018, more students scored at the “proficient learning” level – considered the standard for a college or career track – in nearly every assessment Georgia administers – 25 of 26.

According to the state, 2019’s advances were “the strongest overall gains recorded in the five years the assessment has been administered.”

In a release, State School Superintendent Richard Woods praised the results as a “testament to the hard work of Georgia’s teachers and students, and an increasing focus on educating the whole child and providing a genuinely well-rounded education.”

Ninth graders also fared best in English Language arts, with a state-best 61 percent of students at the “proficient learner” or “distinguished learner” levels.

Data showed that many students are still catching up to meet college-track standards, however.

In mathematics, in only third and fourth grade were 50 percent or more of students at the “proficient learner” and “distinguished learner” levels, the best marks in the state.

Fewer than 40 percent scored at that level in fifth and eighth grade, and on the high school Coordinate Algebra and Analytic Geometry tests.

And in science and social studies, which are administered to fifth and eighth graders and high schoolers, no cohort had 50 percent or more of students at the “proficient” level.

Atlanta Public Schools said it saw its highest-ever rates of proficiency on the exams, saying it saw year-on-year gains in 21 of 24 assessments. And the district said 80 percent of its schools saw increases in the percentage of students scoring “proficient” or better.

“I’m proud of our students, families, teachers and staff for the progress we’ve seen not only this year but also over the past five years,” APS Superintendent Meria Carstarphen said. “We can see the foundational work started in 2014 beginning to take effect across the District.”

Fulton County said its students were “as well or better than the state average” in both English and math.

“In all, our district’s results continue to be above the state average in almost every category and shows the dedication of our educators and students,” the Fulton County Board of Education chair, Linda Bryant, said.

DeKalb County said it saw “noteworthy progress” in its scores, including increased averages for third-to-eighth graders across the board. Clayton County said its high schoolers saw increases in “proficient” learners in five of eight assessments, including a six-point jump on the 9th Grade Literature exam and a four-point increase for U.S. History.

The Georgia Milestones Assessment System is the state’s end-of-year tests that measure how students in grades 3-12 are meeting state standards in four main disciplines: English, math, science and social studies.

High schoolers take an end-of-course test for each of 10 courses designated by the state Board of Education, spanning the four main disciplines.