A Georgia State University astronomer shares an insider's look into living and working in the South Pole. 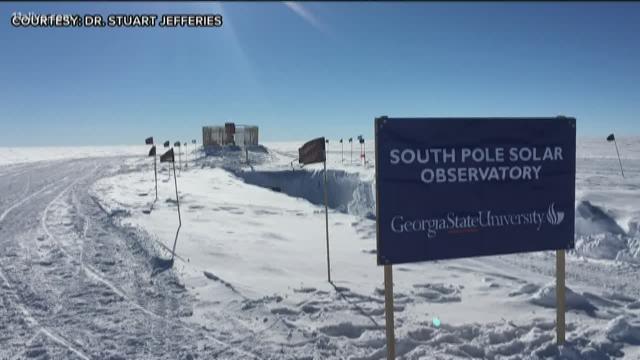 You may be tired of the Atlanta winter, but one Georgia State University professor is weathering cold temperatures in the extremes, all in the name of science.

Dr. Stuart Jefferies, astronomer and professor in GSU's Department of Physics and Astronomy, is part of a research group at the South Pole Solar Observatory in Antarctica, dedicated to studying the sun.

'The sun is above the horizon 24 hours a day during the austral summer, and we bring our telescopes down so we can watch it," Jefferies told 11Alive during an exclusive Skype tour of the observatory.

It's not Jefferies first trip to the southernmost point of the Earth. The professor first ventured to Antarctica in 2016 to measure and characterize internal gravity waves omnipresent in the Sun's atmosphere. His focus now includes studying the source of the heating of the sun's outer atmosphere.

"We also believe we may be able to see solar flares a couple of hours before they even go off," Jefferies said of future research.

The team's technology is capable of recording high resolution images of the sun every five seconds, according to Jefferies. While the position of the sun makes the South Pole ideal for the team's research, living and working in the extreme climate is summed up by Jefferies in one word: challenging.

"Every thing's a challenge here," Jefferies said. "We thought we'd be up and running in ten days, and we'd be observing for seven weeks. It turns out it took seven weeks of very long days to get running, and we've been observing for ten days. Exactly the opposite."

Yet, the comradery of fellow researches helps fuel the team's toward success.

'One of the nice things about coming down here is everybody wants everybody to be successful," Jefferies said. "It's a fantastic community down here."