"All 👀 are on you now Pickens High @PCBOEGA," she said. 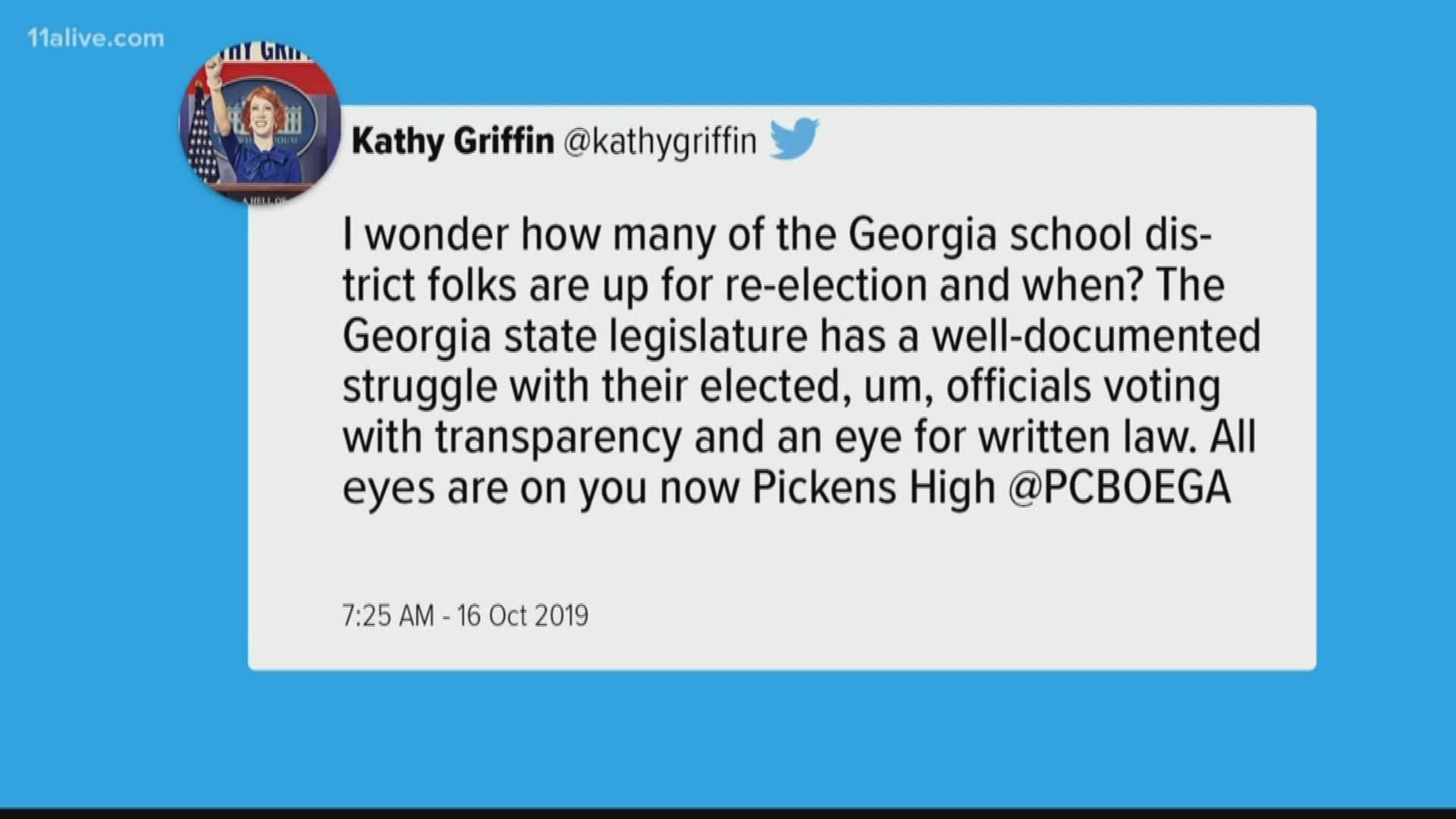 PICKENS COUNTY, Ga. — The Pickens County Public Schools bathroom policy is getting some national attention as award-winning comedian Kathy Griffin weighs in on the matter.

As others on social media brought it to her attention, Griffin tweeted Wednesday about the controversial topic that has caused a rift between school officials and the community.

"I truly hope the Pickens County Board of Education officials in GA will reconsider," she said in one tweet. "So, @PCBOEGA, you may hear from lots of supportive folks for the immense bravery it took this one trans student to speak up & ask for #equality in a High School in...Georgia💪🏳️‍🌈💪."

Pickens County schools will no longer allow transgender students to use the bathroom that aligns with their gender identity, reversing a policy change implemented for the new school year.

The news came just days after parents, students and others in the community attended a fiery meeting voicing their opinions on the matter, as they hoped school leaders would side with their stances regarding the policy.

"I wonder how many of the Georgia school district folks are up for re-election and when? The Georgia state legislature has a well-documented struggle with their elected, um, officials voting with transparency and an eye for written law," Griffin said in another tweet.

RELATED: After threats, school board reverses decision to allow transgender students to use bathroom aligned with their identity

On Monday, more than 600 packed the room to discuss allowing transgender students the right to use the bathroom of their choice.

Some urged the board and parents to accept the decision, as well as trans students. Those who opposed the rule brought up safety and religious concerns, as well as non-transgender students being labeled bullies for not agreeing with the decision.

By the end of the meeting, Superintendent Carlton Wilson told 11Alive he would take everything discussed and make an official decision in the next couple of days. Wednesday is when we learned of the policy change.

The district said in a statement that "there have been many serious safety concerns raised in the past few days" over the policy.

"School board members, staff, and students have been threatened due to the administration's implementation of Adams vs. St John's County School District," Pickens County Public Schools said. "There have been death threats, student harassment, and vandalism of school property."

As a result, the district said it would return to the bathroom procedures that were in place at the beginning of this school year until it could consult with law enforcement and other safety professionals so that these concerns could be addressed.

"We ask that all of our stakeholders exercise patience and discretion until these matters can be resolved, " the statement read.

Griffin's tweet has started a conversation on social media.

"All 👀 are on you now Pickens High @PCBOEGA," she said.

In the comments, some side with Griffin while others disagree. In another tweet she asked for people to join her and show support.

"They’ll see it. So will the Georgia school district. @PickensHighGa," she said.

Convictions of law enforcement officers in police shootings: How often does it happen?