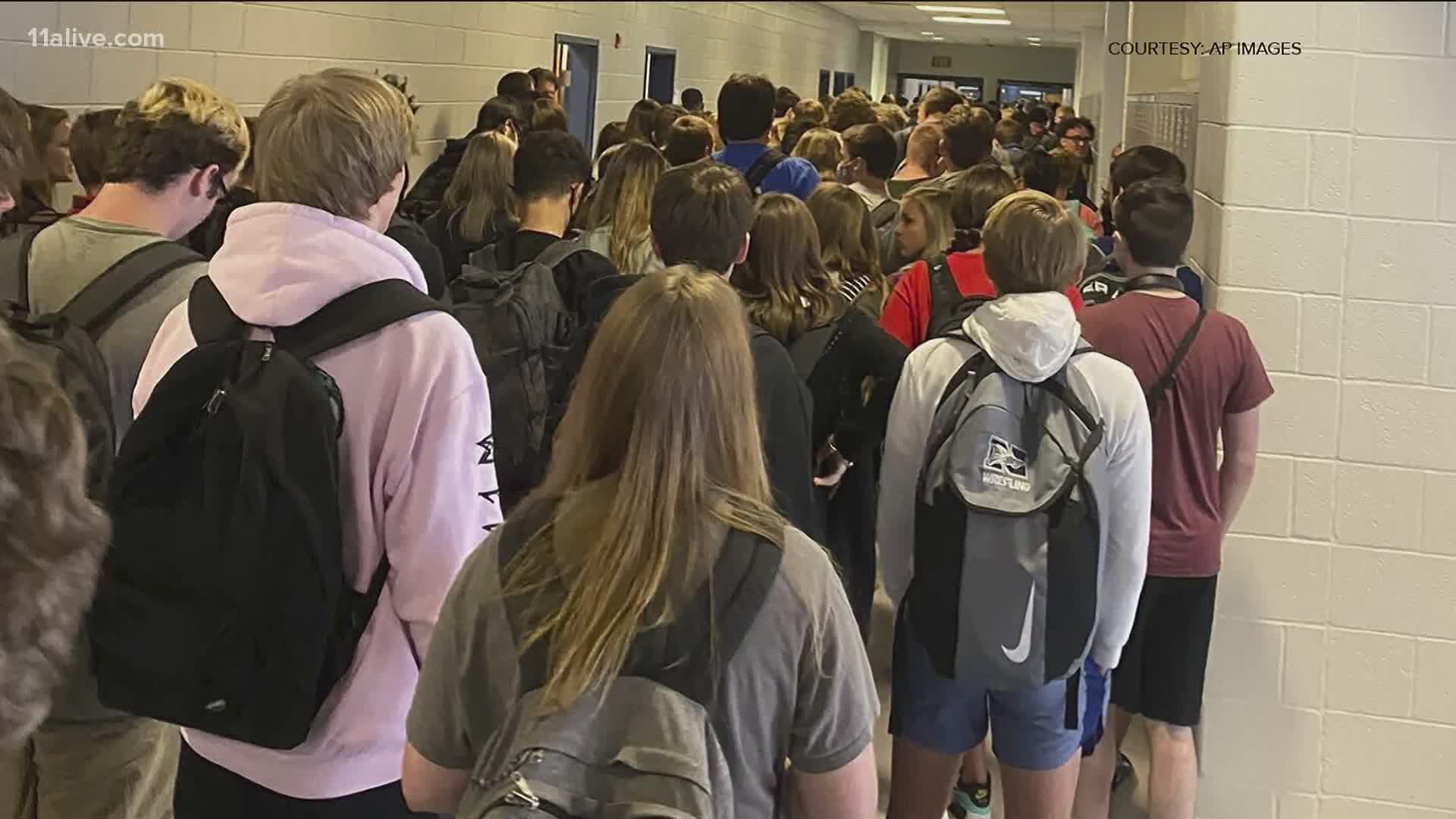 "To be 100% clear, I can go back to school on Monday. I couldn’t have done this without all the support, thank you," she wrote.

The student who shared a picture and video of a crowded Paulding County school hallway say she has been suspended. Hannah Watters, 15, said she feels like the school is trying to make an example out of her.

“We thought that I would get a slap on the wrist since it was my first offense,” said Watters.

After her video and picture went viral, she said staff told students they could be punished for criticizing the school on social media. Watters she was given a five-day suspension for violating three rules from the Paulding County School District code of conduct.

The photo and video shows a crammed hallway at North Paulding High School on Tuesday, which was the second day of the school year. Watters said she posted the picture to her Twitter account after feeling uneasy.

“I was mostly anxious nervous and scared because this virus is very serious obviously and we weren’t taking the right precautions to keep people from getting it at the school," she said. "So I took that picture out of concern for the county and all the kids there and all the teachers and staff."

RELATED: Teachers weigh in on in-person versus virtual learning debate

Credit: AP
In this photo posted on Twitter, students crowd a hallway, Tuesday, Aug. 4, 2020, at North Paulding High School in Dallas, Ga. The 30,000-student suburban Paulding County school district in suburban Atlanta resumed classes Monday with 70% of students returning for in-person classes five days a week, days after the principal at North Paulding announced some members of the football team had tested positive for COVID-19. The district says it is encouraging mask use, but isn't requiring it. (Twitter via AP)

The next day, the honor student said she was pulled out of class and informed she’d be suspended. She feels the school piled on multiple offenses because “every kid uses their phone during school,” she said.

According to the district’s code of conduct, she used her phone without permission during school hours. But the code also says 9th to 12th graders are allowed to use phones in the hallway.

The 10th grader also used her phone for social networking, but the teen said she posted to Twitter after school hours. She recorded other underage students without permission,  but said when she took the photo and video she did not realize she was breaking any rules.

Anthony Kreis, a Georgia State college of law assistant professor, said students still have the right to free speech, even inside public schools.

“I would also be interested to know about what kind of enforcement has historically happened here are these students being selectively penalized," Kreis said. "Or is anyone in the school being punished in the same kind of way?"

Watters did not expect her posts to take off like they have. When she posted it to Twitter, she had 8 followers; at last check she had nearly 1,000. She said it’s not her goal to see the school shut down, but she wants to see masks enforced.

“I want to stay opened up, but we can’t if we don’t stay safe and don’t follow protocols,” said Watters.

11 Alive reached out to the Paulding County School District numerous times but did not hear back. Watters is asking the school to reconsider the suspension, although it is not clear if it has gone into effect yet.