This is Burruss’ first time being chosen  to be on the cover of the magazine. To celebrate the achievement Burruss threw a launch party that was truly star studded. Among the guests were Nene Leakes, Kim Zolciak-Biermann,  Eva Pigford, Cynthia Bailey, Porsha Williams, Kenya Moore, Rasheeda Jones, LaTavia Roberson, Malaysia Pargo, Marlo Hampton, Bravo’s Derek J and many more. 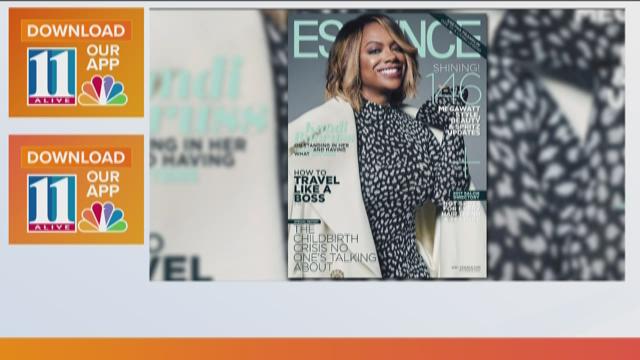 She’s a mother, a successful entrepreneur and a Grammy Award winning R&B artist who has been dominating the industry for nearly three decades. Friday night, Kandi Burruss celebrated yet another career milestone by gracing the cover of Essence Magazine and landing a role on Broadway!

“That's like the magazine I still to this day when I go to the airport, I have to get. So to be on the cover is amazing.”

This is Burruss’ first time being chosen to be on the cover of the magazine. To celebrate the achievement Burruss threw a launch party that was truly star studded. Among the guests were Nene Leakes, Kim Zolciak-Biermann, Eva Pigford, Cynthia Bailey, Porsha Williams, Rasheeda Jones, LaTavia Roberson, Malaysia Pargo, Kenya Moore, Marlo Hampton, Bravo’s Derek J and many more.

Outside on the red carpet Burruss revealed her biggest motivation, her family and friends.

“Atlanta, you know that's my city,” Burruss said. “ And I'm trying to continue to build that home and help everyone around me, my friends and family, my whole team along with anyone else that I know to make things happen. I just do what I do so I can help make a platform for my whole team.”

She says she was thrilled and humbled when she first received the call from Essence but also admits there were some nerves on the shoot for good reason.

“It was an amazing experience. The real cool thing was, Essence, they decide on the glam squad they want to use. So at first I was kind of nervous. They were making me switch things up but I'm so happy with how the cover turned out. It's beautiful and it's always been a dream of mine to be on the cover of Essence Magazine.“

Inside the party the lights were low but the energy was high as the DJ pumped out tunes from Rihanna to Xscape. 11Alive also spotted one of the Scott sisters from the group Xscape taking photos with friends. The group made one of their first concert stops at the ESSENCE Festival last July. They received so much buzz, they decided to get back together and go on tour this November. We asked the hard hitting question: When will fans get to hear a new album by the 90’s group that topped the charts for years?

“We are not working on one as of yet. Right now we are just totally focused on getting this tour out there.”

The tickets for the three month long tour just went on sale this month and she says sales are already through the roof.

“I'm so excited because the tickets went on sale this week and they are already just going crazy in the box office so I'm super excited.”

On the carpet, we also asked her about news involving her best friend and fellow Xscape member Tiny no longer divorcing from her husband T.I. She was lost for words but husband Todd Tucker swooped in with the save, saying that “black love is amazing.”

Inside the event, that same excitement quickly turned very emotional as a tearful Kandi Burruss took to the stage thanking her husband Todd Tucker and her entire support team for getting her this far. She also revealed why getting on the cover was her mission.

She says at the start of this year she wanted to conquer two things, being featured on the cover of Essence Magazine and also land a role on Broadway. Minutes into her speech, her team manager, DonJuan Clark, came to the mic and revealed she just landed the role of Mama Morton in Broadway’s hit show, Chicago.

Congratulations, Kandi. We are so very proud of you. Atlanta is rooting for you.

The October Issue of Essence is out on stands now.

EDITORS NOTE: For those wondering about her new restaurant The Old Lady Gang Southern Cuisine, we asked how its going! She says the restaurant is adding some fun nights, recently added rib tips and a new dessert is on the way.

For more behind the scenes video from entertainment reporter Francesca Amiker's night, follow her on all social media platforms at FranTV11alive.