ATLANTA — It's been one year since Special Counsel Robert Mueller opened an investigation into possible collusion between the Trump campaign and Russia during the 2016 presidential election, and majority of Georgians believe he should be allowed to complete his investigation.

According to the results of an exclusive poll from 11Alive News and SurveyUSA, more than 50% of respondents believe Mueller should be allowed to finish his investigation, while nearly a quarter believe the investigation should be stopped. An equal number of people are not sure whether the inquiry should proceed or not. (Scroll down to see exact percentages.)

Regardless of the outcome of the special investigation, a solid majority of people believe President Trump will finish his first term in office – 59 percent to 18 percent, with nearly a quarter of respondents answering they were not sure.

When asked their opinion of President Trump, more people said they had a favorable opinion than an unfavorable one, 42 percent to 36 percent. Fifteen percent of people had a neutral opinion of him, with 7 percent having no opinion of him.

DIG DEEPER | Read complete results of this poll, including by race and age

Georgians support completion of Mueller investigation, but unsure of outcome 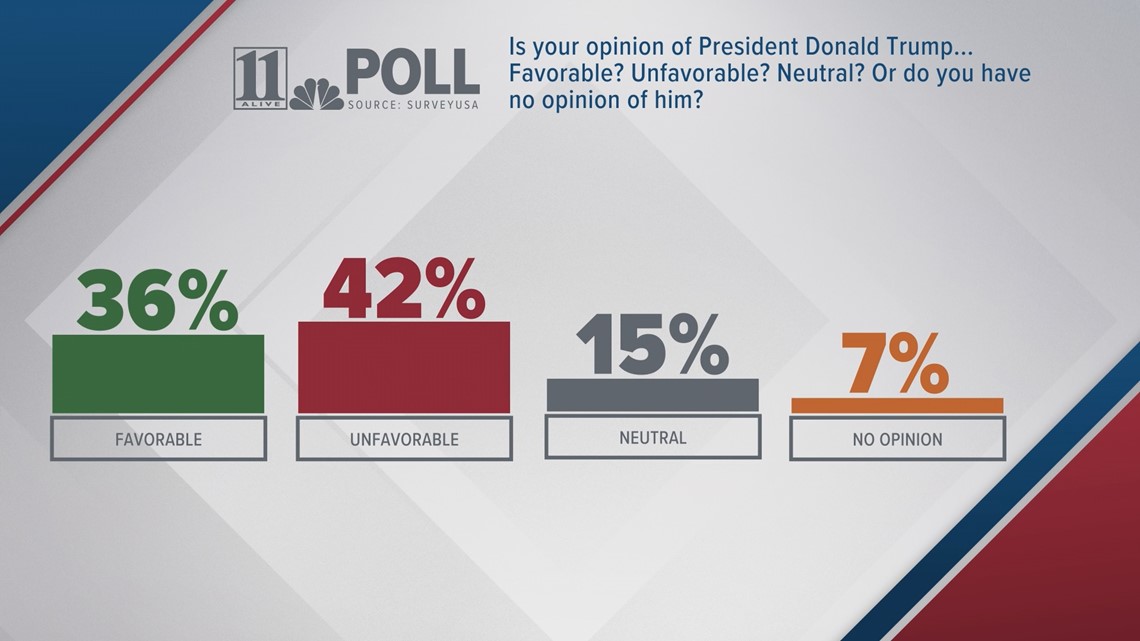 1. Is your opinion of President Donald Trump ... favorable? Unfavorable? Neutral? Or do you have no opinion of him?

2. Should Special Counsel Robert Mueller be allowed to complete his investigation? Or should the investigation be stopped?

3. Do you believe the Mueller investigation will lead to criminal charges against President Trump? Impeachment? Both? Or lead to nothing?