Retreat or recovery? How a wood cabin is saving teenage boys from the opioid crisis.

"That’s why we exist. We are here. We wish we didn’t have to be here. But we are here to help that mom and dad that’s in crisis mode get their family back." 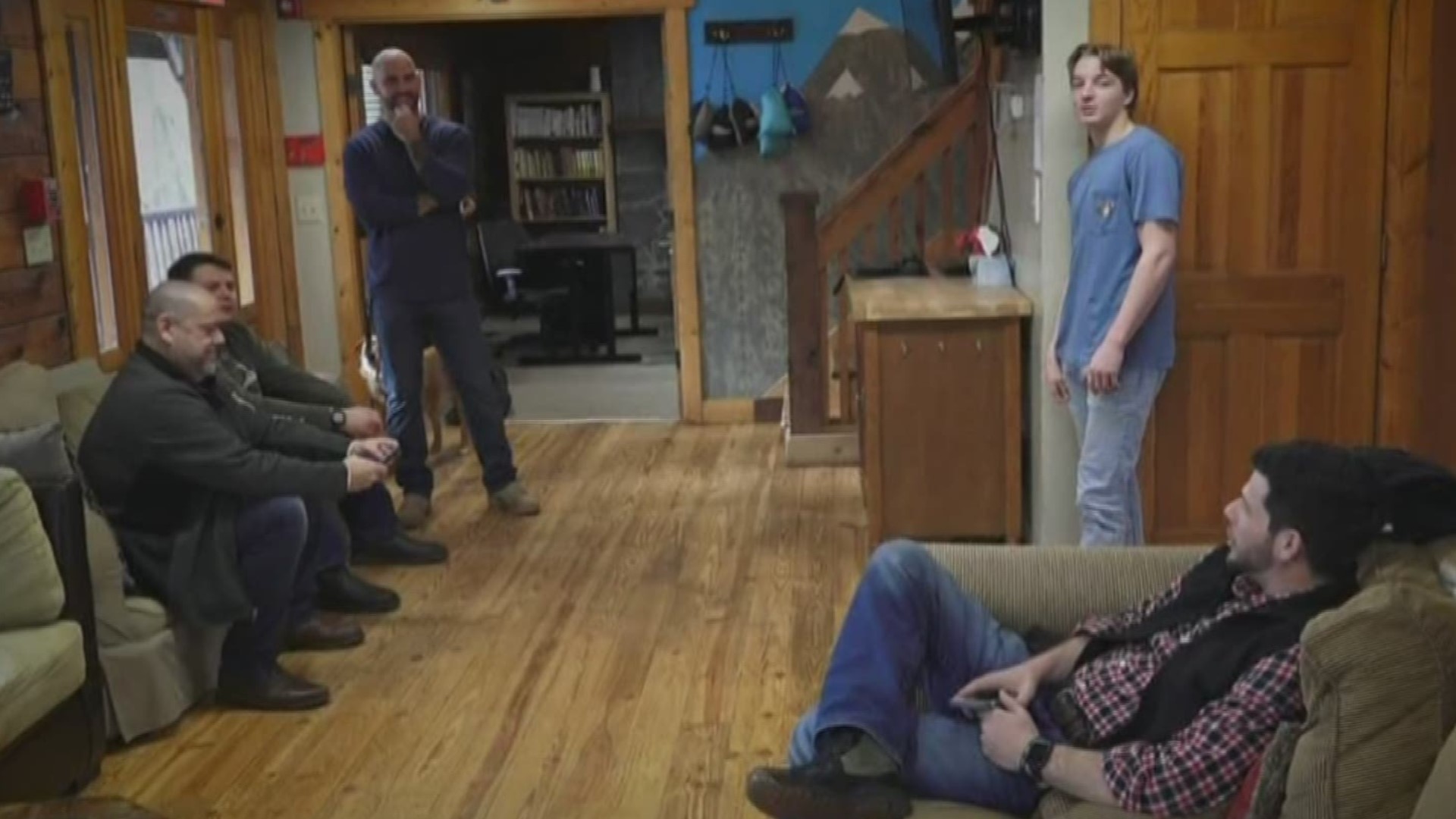 GAINESVILLE, Ga. — Nestled on 57 acres of wooded property in Gainesville sits a cabin.

In between the living room couches and the classroom full of desks is an etching on the floor. It looks like a triangle burned into the wooden planks where the left side creates the number three and the right side creates the letter “D.”

At the bottom are the words, “Saving teenagers from addiction.”

“The drugs have changed over the years,” Shaw said. “Now there is no rock bottom. Now there’s just death. That’s why we exist.”

According to the Centers for Disease Control (CDC), on average, 130 Americans die from an opioid overdose every day.

For 18-year-old Doug, this is his alternative to jail.

“I’ve been in juveniles and adult jails. I’ve been six times total,” he said. “I felt indestructible. Jail kind of woke me up, but then it didn’t. I would get out and be good for like two weeks or a month and then go back to the same stuff.”

His “stuff” was prescription pills and meth.

“I mean alcohol and weed. All of that, too, but those were my main ones: pills and meth,” he said.

He’s been in the program for five months and says it’s changed the course of his life.

“I used to look at it and I just didn’t care. I was like whatever happens happens. That’s how I lived for a few years actually,” he said. “I see my future a lot better now. . . I’m happy like every day.”

Up to 14 boys live in the cabin at a time and adhere to strict rules, spending their days according to a busy schedule of chores, counseling, and class. Unlike other programs, this one doesn’t look or feel like an institution.

“Sometimes I forget. I call it home,” Michael said.

That means a lot to Michael who has bounced around the foster system and eventually found himself homeless.

“I used to not know what I was going to be. I thought I wouldn’t even make it past 18,” he said. “I’m kind of a thick-headed individual.”

He’s been through several programs before, but nothing worked. Not long after he arrived at the cabin, he tried to run away. He says thankfully, they let him come back.

“They never gave up on me. Just made me feel like I actually had a chance to be myself and break out of those chains that were holding me back, kind of rewrite my story,“ he said.

He says this program very likely saved his life.

“Probably would have been homeless. . .or probably even dead,” Michael said. “Went from having nobody and having burned all my bridges, to finding Christ and actually finding my pathway to have my family back, and I have my future in solid stone.”

Shaw says there are a few things that make this program different.

3D Teen Recovery
Special thanks to all the wonderful people who helped us clean the c... abin today! Tonight the boys will sleep on brand new beds and mattresses courtesy of United Logistics! Thanks to the Chick-fil-A Jesse Jewell Parkwayfor the awesome lunch! The cabin looks and smells 100 times better! Thank you!!!

Instead of a three to ten-day stay, which is barely long enough to withdraw from some drugs, Shaw immerses the teens in new habits, educational classes and professional counseling for six to nine months.

“We want to help your child rewire,” Shaw said. “We want them to figure out why are you even going down that trail and how can we help you not rely on that anymore? We have found that takes more than 10 days.”

Instead of pausing their lives for that time, the program works with accredited schools, so the boys can continue their education and graduate on time.

In the first 30 days, there’s no contact with family. For many boys, like Cash, that turns out to be a good thing.

“It got to where my parents couldn’t control me,” he said.

He had tried several other programs. He purposely got himself kicked out of the last one. At the cabin in Gainesville, having the freedom to leave made him want to stay.

“This place kind of gave me a sense of peace,” he said. “It’s like a wooden cabin, so I feel like I’m on vacation a little bit. It’s not just white walls and big steel doors. It’s not a facility.”

After five months in the program, Cash says he looks forward to seeing his family at their weekly visits and considers himself a changed man.

“I flipped around completely,” he said. “I had freedoms at home, but I wasn’t doing the right thing, so now I’m excited to get out and do the right thing.”

Shaw admits not every story is a success. Drop off days are hard. Some leave. Some relapse. But he says the important thing is that people know they’re here.

“Boys in our particular area just have very few choices on where to go to find help,” he said. “There’s nothing worse than being in a crisis and not knowing how to handle it.”

As the opioid crisis grows, facilities can barely keep up. Shaw says he received seven calls in one day, all before noon, from parents desperate for help.

“We can’t stay ahead of it. We’ve got to build more cabins,” he said.

They’re already working on the licensing for an expansion. By the end of 2020, they hope to house 30 teens.

His ultimate hope is to buy another property and create an identical program for teen girls.

“We wish we didn’t have to be here, but we are here to help that mom and dad that’s in crisis mode get their family back,” Shaw said.

Fake prescription pills with potentially deadly fentanyl circulating in US