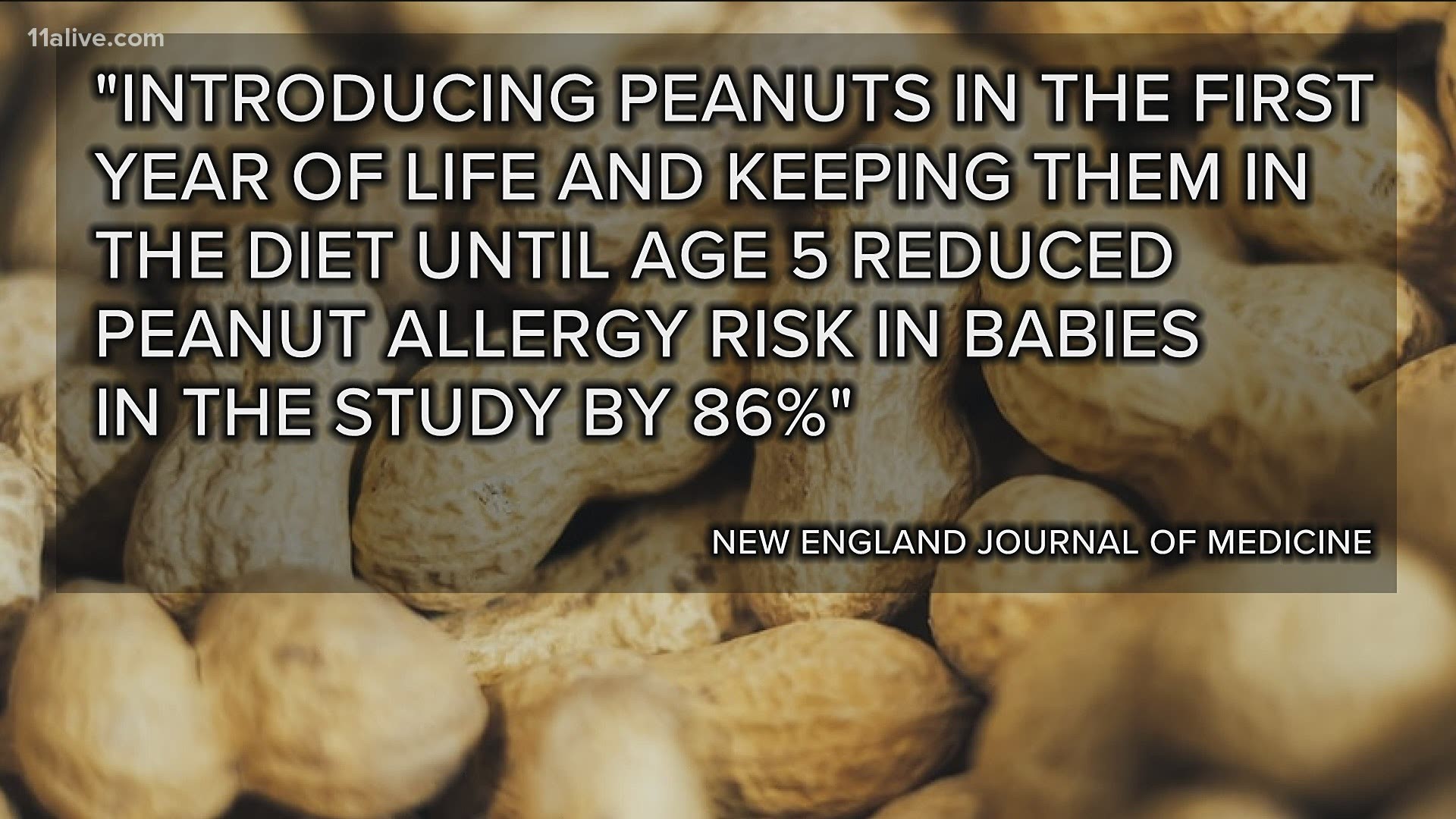 That number includes 11-year-old, Niall Jaxon of Atlanta. Her parents, Catherine and JJ said that 8 years ago when Niall was 3, a walnut changed everything.

"Her eyes were swollen shut, she was covered in hives, it was terrifying," Catherine said. "You always worry when they're out of your sight that they could eat something that can harm them."

The guidance at the time was to avoid giving tree nuts and peanuts to babies. But, by 2015, the Jaxons had had their third child, James, and a new study came out in the New England Journal of Medicine.

The Learning Early About Peanut Allergy (LEAP) study said peanut avoidance was not the way to go. Rather it suggested introducing peanuts to babies was the best way to prevent peanut allergies.

The study found that introducing this allergen in the first year of life and keeping them in their diet until age 5 was shown to reduce peanut allergy risk in the babies in the study by 86%.

"It's a huge deal, it helped change decades-long thinking on how we feed infants," said Collins.

And, now, the LEAP study has helped change the guidelines here in the U.S.

Every 5 years, the USDA releases new guidelines on how Americans should eat. In the latest guidelines, they included children under the age of two and how you should feed them to help prevent food allergies.

According to the new guidelines, early introduction is crucial - between 4 months and a year. You should introduce all common food allergens when solid foods start and consistency is key; once an allergen is introduced, you should maintain exposure.

When it comes to peanuts, Collins said there are easy ways to introduce the allergen to infants.

"You can start with peanut butter or peanut powder and mix it with warm water or breast milk or formula and that makes a slurry," said Collins.

To make peanut exposure even easier, last year the Jaxons reached out to the lead London doctor in the LEAP study, Dr. Gideon Lack, to create preventative peanut puffs. They formed Mission Mighty Me to create baby-friendly snacks and raise awareness. During the pandemic, they donated puffs to food-insecure families as another way to raise awareness and bring food allergies down.

Jaxon said she's glad to play a part in helping other families avoid peanut allergies- she wishes this information would've been available when Niall was a baby.

"If there was anything we could've done to prevent this food allergy for her we would've done it," said Jaxon.

For more information visit these pages: