For almost 30 days, a 6th grader brings his trumpet to Emory Hospital in Decatur to play for workers during shift change. 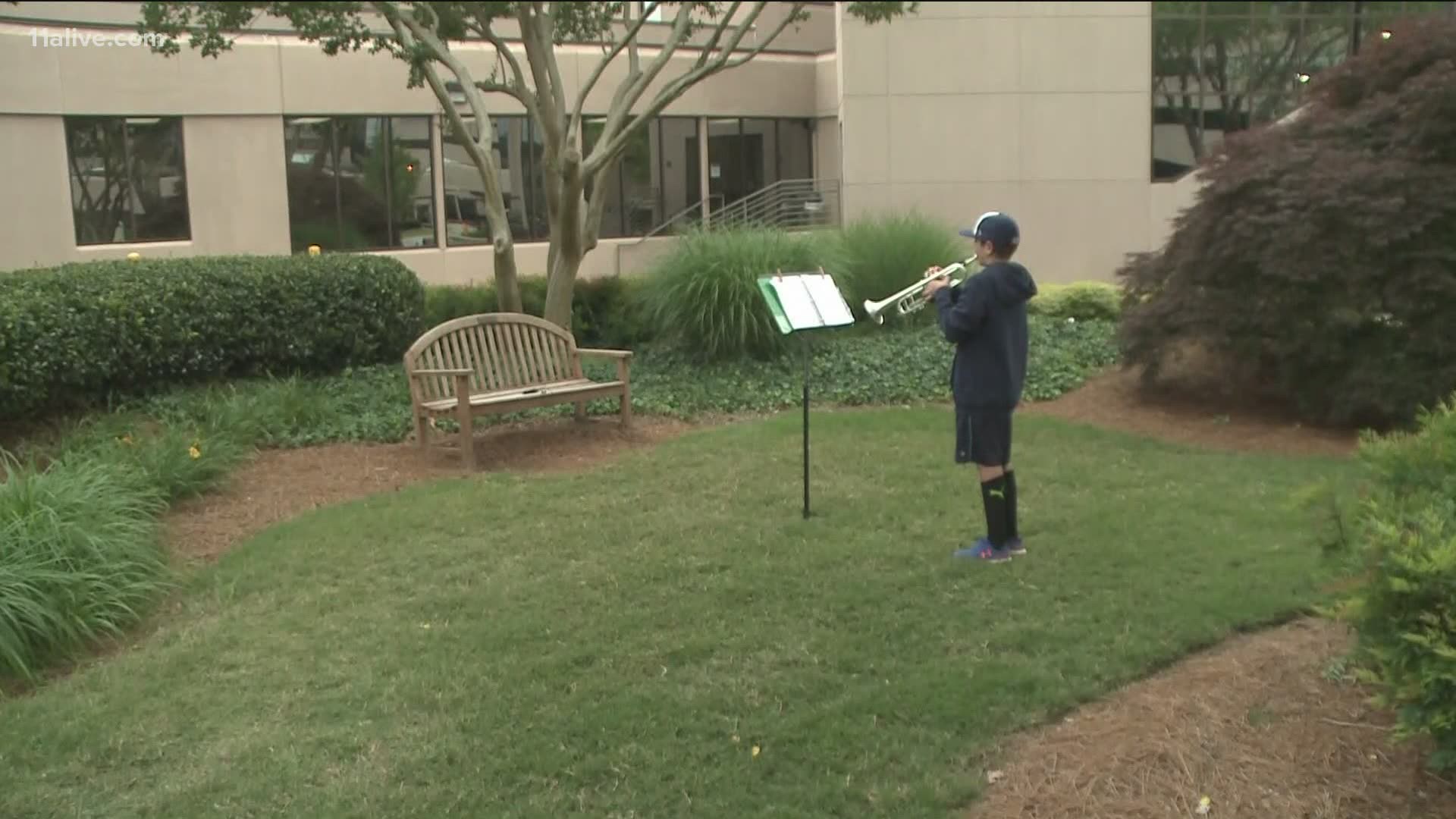 DECATUR, Ga. — A 6th grader wanted to find a way to show his appreciation for medical workers through music. Jason Zgonc is so committed to the salute, he’s continued his nightly performance for almost a month straight.

“I’ll sometimes be playing Fortnight with my friends and I’ll say it’s time to go to the hospital, bye,” 12-year-old Jason explained.

He brings his instrument of choice, a trusty trumpet he’s spent two years practicing on, to Emory Healthcare in Decatur.

Jason’s mom, Karen Zgonc, was on social media one night and saw a musician from the Philharmonic playing for healthcare workers on top of his rooftop apartment in New York. And just like that the Jason was inspired to do the same in Georgia.

The one-man band comes with an impressive set list.

“Danny Boy, Over the Rainbow, America the Beautiful, My Country Tis of Thee, Beauty and the Beast,” the young man listed.

He times the performance for the right moment, showing up between 6:30 p.m. and 8 p.m. for shift change. And it doesn’t go unnoticed of course, as he’s lined up dedicated fans.

“When’s the album coming out?” Robert Westmoreland laughed and shouted towards Jason.

Westmoreland can’t wait for the nightly ritual, when Jason stands in the middle of the hospital grounds, so his music can bounce all around.

“It’s the little kick! It’s like a vitamin, a boost,” Westmoreland said enthusiastically. “We have something called the Spirit of Emory here, and Jason is an extension of that, that good, hearty energy that you can do it. That’s Jason.”

“It made feel good to know that I have a fan, at least one fan,” Jason shyly said.

He has more than one. Fans of the performance even have a hashtag for him on Instagram, #jasonplaystrumpet.

With a hectic work schedule since the pandemic, workers are happy Jason is now a part of their routine.

Westmoreland explained, “We leave, we talk about him in the lunchroom, hey did you see the little guy out there playing?”

Even the birds join his outdoor performance, quiet at first, but soon, loudly chirping to provide background vocals.

Jason will keep coming back for the foreseeable future, playing his songs of appreciation.

“It’s really fun, makes people happy and if you like doing it, it makes you happy too,” he proclaimed.

Music runs in the family. His mom owns a music school, ZTunes Music and his youngest brother, Tristan, plays the French horn. Jason’s dad, Nathan plays for the Atlanta Symphony Orchestra. Jason said his dream is to one day play in the orchestra with his dad right beside him.

CDC says coronavirus 'does not spread easily' on surfaces, objects