She is defying the governor's executive order and requiring the public to wear masks. 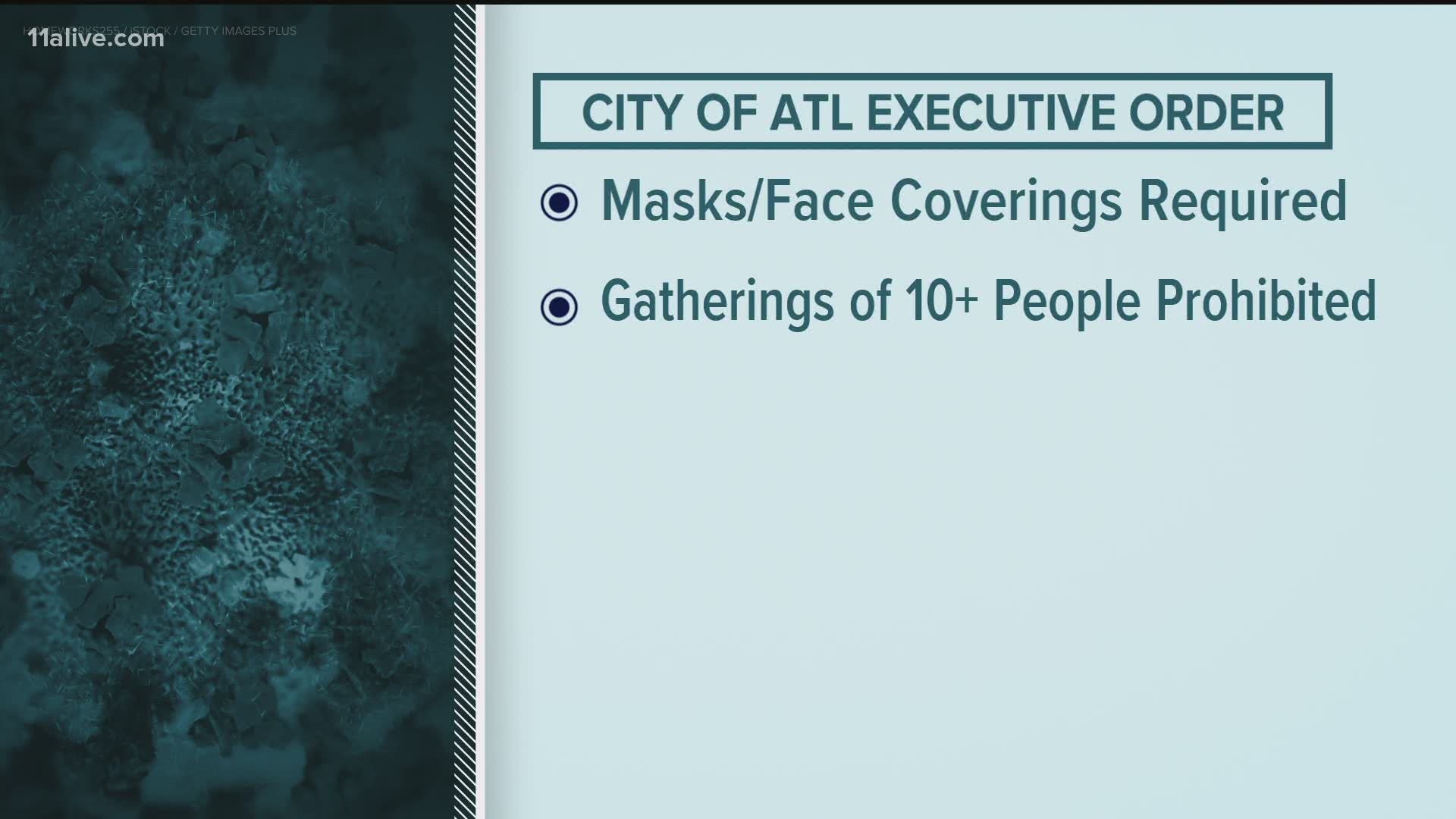 ATLANTA — Mayor Keisha Lance Bottoms said this morning on MSNBC that she would defy the governor's executive order, and issue her own requiring face masks to be worn in public. She made good on that promise when she signed an executive order the same night. It goes into effect immediately.

As part of the mandate, anyone inside commercial entities or public spaces in which proper social distancing is not possible is required to wear a face covering. The order also applies to all people flying in and out of Hartsfield-Jackson International Airport.

The order also bans gatherings of more than 10 people on City of Atlanta property.

Exceptions to the order include anyone younger than 10, anyone with a medical condition or disability, and any person inside their personal vehicle. It also does not apply to those who are engaging in services that require the temporary removal of masks, such as surveillance screenings, personal care services and the like. (click here to read the full executive order)

Code enforcement officers will be authorized to enforce the mandate. Penalties for violations could include a citation, or, in strict enforcement, an arrest. If convicted, the sentence could include up to six months in jail or a $1,000 fine.

Mayor Bottoms said she has continuously asked Gov. Brian Kemp to mandate masks in Atlanta in order to stop the spread of COVID-19, but she said he has "refused."

"I specifically asked our governor about allowing Atlanta to go forward with mandating masks in our city, he refused," Bottoms said. "Other cities have taken the approach that they are going to defy the governor's executive order and Savannah has done it, some other cities have done it and Atlanta is going to do it today."

She said that COVID-19 is "wreaking havoc" in the city. In a statement announcing the order, she wrote that the measure would help to slow the spread of the virus in Atlanta.

"We will never be able to reopen our schools and our economy if we don't take some responsibility for what we can do as leaders to make sure that people aren't exposed to this virus," she said on MSNBC.

When asked about schools, she said it doesn't seem like a good idea to open due to the spike in cases.

"I think it's irresponsible to rush to open our schools," she said.

It's not clear how the governor will address the cities that are forging ahead with their own mask mandates.

It's a move that business owner Marie-Laure Coste du Jols believes is smart. She owns Le Jardin floral design on the Westside. She told 11Alive her store has had measures in place since they reopened.

"I think it’s inevitable and we are behind doing it, it needs to happen for sure," she said. "We have at the front door an old fashion bell that people can ring and we come to greet them at the table and we take their temperature and we ask that they wear a mask if they want to come in."

Nearby at the Seed Factory, Rachel Baba is also on board.

"We've had a sign on our doors asking that adults wear masks, so we’ve been kind of taking that into our own hands," Baba explained.

While we didn't talk to anyone today who was against a mask mandate, 11Alive is Where Atlanta Speaks, and several of our viewers voiced their opinion on why they were for or against a mask.

Baba said she, too, expects not everyone will agree with the mandate.

But she hopes once it's mandated it will make it easier for business owners.

Editor's note: This story has been updated to include the penalties for violating the mask mandate.

Doraville to require masks in public