The issue of testing is becoming a central one as Georgia sees its widest outbreak of the coronavirus since the pandemic began. 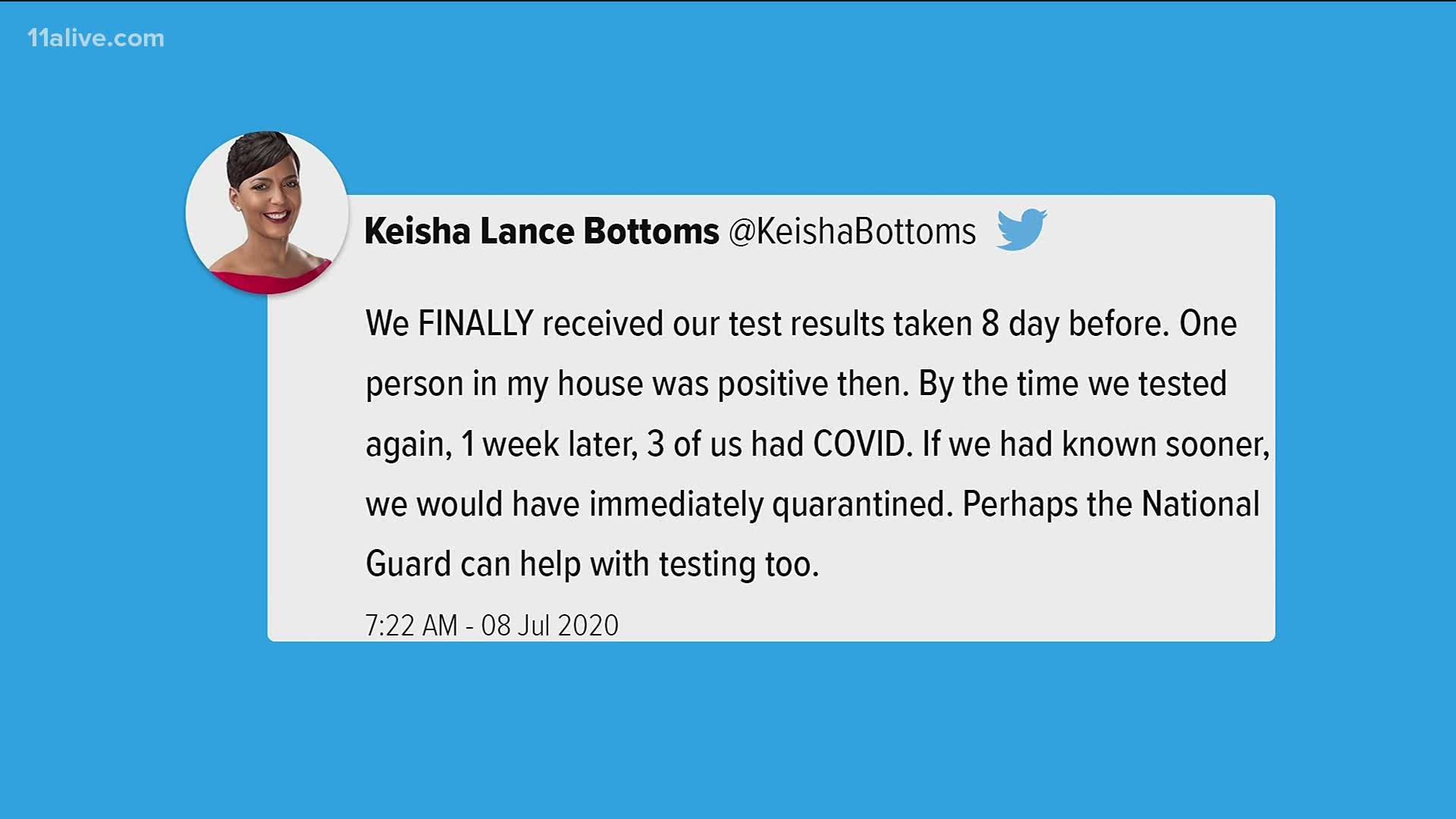 ATLANTA — Atlanta Mayor Keisha Lance Bottoms says it took her eight days for her and her family to receive COVID-19 test results after one person in her household tested positive.

When the results finally arrived, two more people in the household - including the mayor - had tested positive. Bottoms, who has said she does not have any symptoms, said with quicker test results they would have started quarantining much sooner.

"We FINALLY received our test results taken 8 days before," the mayor tweeted early Wednesday. "One person in my house was positive then. By the time we tested again, 1 week later, 3 of us had COVID. If we had known sooner, we would have immediately quarantined. Perhaps the National Guard can help with testing too."

The mayor held a press conference on Sunday following the July 4 shooting death of an 8-year-old girl, at which she wore a mask when she wasn't speaking. She said in a later tweet Wednesday morning that she'd been tested in previous incidents after potential exposure, indicating it was not the first time she had continued conducting mayoral duties while waiting for a result.

"No one in my house had symptoms then and no reason to quarantine," the mayor wrote.

The issue of testing is becoming a central one as Georgia sees its widest outbreak of the coronavirus since the pandemic began.

Even as the state conducts more tests than ever - more than 20,000 according to state figures in five of the last seven days - in many instances it's not enough to keep up with demand. There are widespread anecdotes about how difficult it is to get a test done in the metro Atlanta area - including that of an 11Alive news producer who tried to schedule an appointment for a test on Sunday and found the soonest one available wasn't for 16 days.

That surge in testing is then making it more difficult for labs around the state to process them all.

11Alive's Andy Pierrotti reported yesterday on a 34-year-old man who - through a good deal of effort - managed to get a test on Friday after his friend whom he'd recently seen tested positive.

That man is still waiting for his result.

The state told Andy in a statement that public labs are being put into overdrive to try and keep results churning - but that it only goes so far as some private labs the state contracts with are seeing delays.

“The large commercial labs such as LabCorp and Quest have advised of increased turnaround times – here in Georgia and around the country," Nancy Nydam, the state Department of Public Health spokesperson, said in an email. "We can’t control that."