Mayor Keisha Lance Bottoms pointed at nationally researched model data which says the incidence of exposure is increasing since Georgia's businesses have reopened. 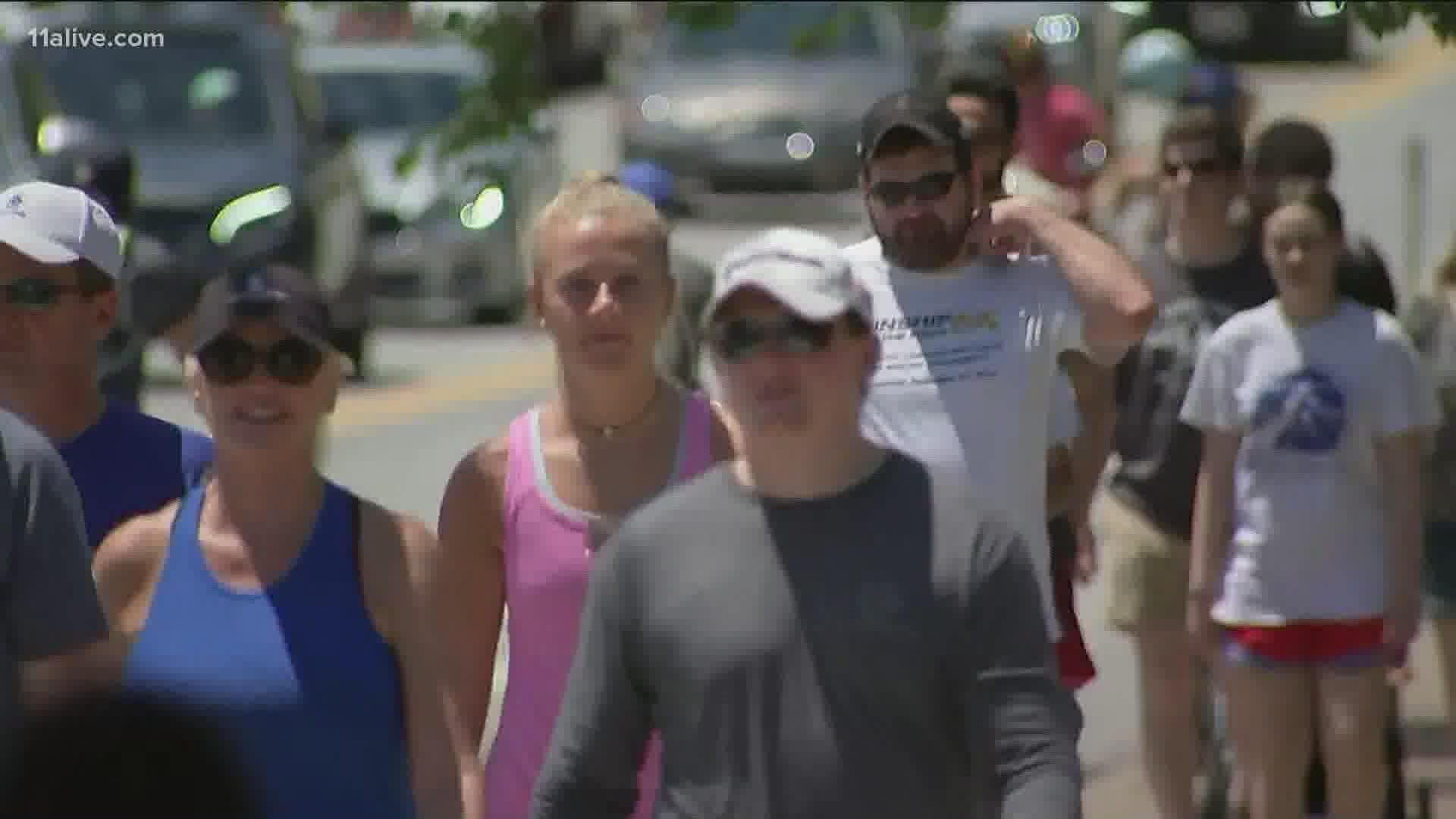 ATLANTA — A new Forbes magazine article on Monday says that the risk of exposure to COVID-19 in the state of Georgia has increased by more than 40 percent since Gov. Brian Kemp has reopened the state for business.

Atlanta Mayor Keisha Lance Bottoms cited the article in a tweet Monday afternoon, saying that those who came out in large groups over the weekend and ignored social distancing were in danger of being exposed to COVID-19. Bottoms cited the people who gathered in crowds at Greenbriar Mall in southwest Atlanta on Saturday morning in search of the new version of Nike's Air Jordan shoe as it went on sale.

She also pointed to crowds gathered at the Mall West End to shoot off fireworks over the weekend as well as shoppers at Lenox Square in Buckhead, which reopened on Monday morning.

She tweeted, "For those who crowded at Greenbriar awaiting the new Jordans, gathered at Piedmont Pk, shot fireworks at the Mall West End & even those now shopping at Lennox Square Mall, know that the only thing that’s changed about Covid-19 is your chance of catching."

The modeling data cited in the Forbes article was compiled by Stanford University's Big Local News in collaboration with Pitch Interactive and the Google News Initiative. The data indicated that on April 21, three days before Gov. Kemp began to allow some businesses to reopen in Georgia, the state ranked as the 16th worst in the United States for risk of exposure to COVID-19.

The incidence rate for COVID-19, according to the Big Local News COVID-19 Case Mapper is calculated as the number of coronavirus cases for every 100,000 people.

According to Forbes, it is the best publicly available metric for estimating an individual's risk of exposure to the virus. The reporting data indicated the incidence rate at that time for Georgia was 180.7.

The incidence rate in Georgia has continued to increase each day since, through May 2 (the most recent date that we have data available), when the rate was 256.8 -- an increase of 42 percent.

Based on newly released information, it does not appear that the rate will lower dramatically soon.

The data cited by Forbes is not the only data that points in a higher direction.

According to a new report from FEMA and the CDC and cited by the New York Times, the number of new cases of COVID-19 is projected at about 200,000 by the end of May. The same report projects up to 3,000 deaths per day.

As a result, President Donald Trump has revised his projections for the total U.S. death toll from COVID-19 to as many as 100,000 -- up from the 60,000 figure he had suggested just a few weeks ago.

Candace Broce, Gov. Kemp's director of communications, told 11Alive News on Monday afternoon that the data cited by Forbes was incorrect and forwarded a tweet from economist and author J.C. Bradbury to support that point.

Broce said that the Georgia State Patrol did not receive any complaints over the weekend from Piedmont Park, Greenbriar Mall, Lenox Square or the Mall West End.

"Georgia State Patrol promptly responds to complaints when they get them. The health and well-being of Georgians are our top priorities, and law enforcement officers are working day and night to keep people safe. There are communities across the Peach State with law enforcement working hard to ensure compliance with the Governor’s orders. But they should not be in this fight alone. People and business owners also have responsibilities. To mitigate the spread of coronavirus, we urge people to follow social distancing rules, wear masks in public if possible, and protect their fellow Georgians," Broce said, in part in an emailed statement.

Broce asked about the involvement of Atlanta Police in the patroling and compliance of areas within the city limits.

"While the Mayor is disappointed to see a few isolated incidents of gatherings which seemingly do not adhere to social distancing guidelines, through APD’s regular patrols, we have been able to inform those who are not in compliance of the guidelines—and most have cooperated and disbanded," Smith said.

Smith went on to emphasize that Bottoms' administration was continuing to work through legal and administrative options and adjust, if necessary, based on the advice and counsel of medical professionals and the members of the mayor's advisory council on how to best reopen the city of Atlanta.

Hello, justice, do you hear me? Supreme Court meets by phone