According to public CDC figures, Georgia has the highest cases per 100,000 people as reported over the last seven days. 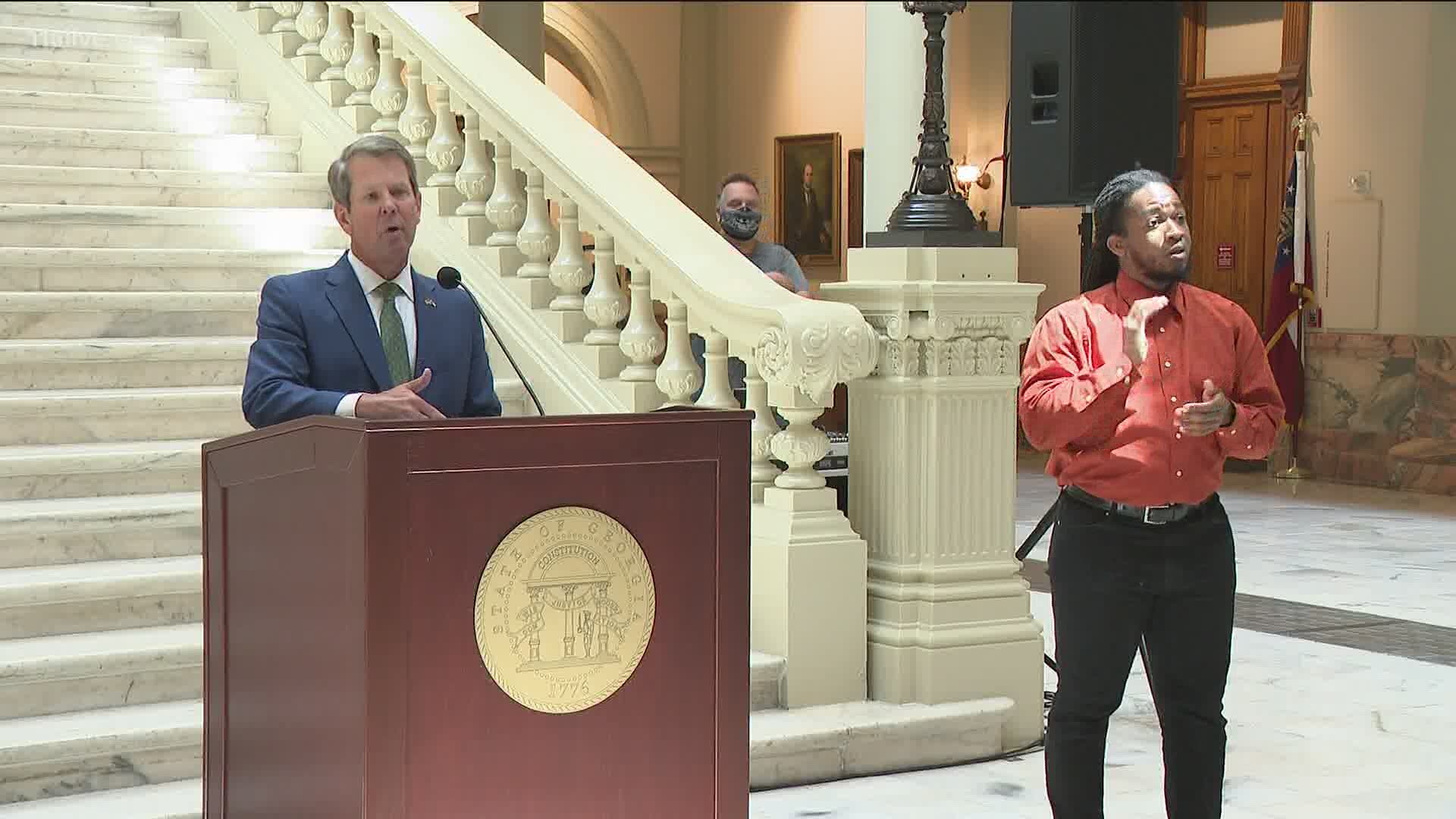 ATLANTA — Gov. Brian Kemp defended Georgia's record with COVID-19 on Wednesday in sharp exchanges with a handful of reporters at a news conference, decrying what he called one-sided reporting.

It was the first public questioning the governor faced since a White House report outlining how Georgia now has the highest coronavirus case rate in the country became public in a leak to the Atlanta Journal-Constitution. 11Alive also obtained the report from a source on Wednesday.

Public CDC figures confirm Georgia has the highest rate of newly reported cases over the last seven days (as of yesterday) in the U.S., at 179.79 new cases per 100,000 people.

RELATED: Georgia named state you're 'most likely' to be exposed to coronavirus, studies show

That lines up closely with Georgia Department of Public Health data, which reported a running 7-day case average of 2,615.7 on Wednesday, which would translate to a cases per 100,000 figure across a week of 172.45.

The governor contended though that the news media are ignoring the state's broad downward trend.

"Look I'm fine if you want to put the per capita numbers out there, I look at them every day ... but those numbers have dropped 26%, our hospitalizations have dropped. To scare people with one number is not fair to the general public, not giving them the benefit of the doubt to make good decisions based on all the data."

The state reported 7-day running averages of new cases of more than 3,600 at various points in mid- and late-July. Figures have fallen from those peaks in the last two weeks to a recent one-day low reported Wednesday of 2,391.

Active COVID-19 hospitalizations have also fallen from a peak of 3,200 on July 30, to 2,626 as of the most recent Georgia Emergency Management Agency report on Tuesday.

The governor also pointed to the state's Rt figure, which represents the rate at which the virus is reproducing. Generally, if the number is below 1.0, that means the virus isn't spreading as much, while increasing rates above 1.0 indicate more spread.

Georgia's number is 0.95, according to one popular tracking site, about middle of the pack among states.

"All I'm asking is for Georgians to get all the information. If we're the highest, that's because Texas and Florida and Arizona that were peaking are on the downclimb, just like we are," Gov. Kemp said. "But that is not the only number that Georgians need to look at. I will tell you the media only focuses on the bad numbers, they never look at the good numbers."

The White House report, dated Sunday, laid out a number of recommendations for Georgia to get its elevated COVID levels down.

Among those would be a statewide mask mandate for counties with 50 or more active cases, a measure the governor has so far resisted - though his most recent executive order did allow for local governments to institute their own limited mask requirements.

"The epidemic in Georgia remains widespread across the state and statewide consistent mitigation is needed to improve the current community spread," the report states.

“Georgia, right now, is at the bottom,” said Georgia Tech Biological Sciences Professor Joshua Weitz.  "I'm sorry to say, unfortunately, Georgia is number 50 out or 50 in terms of circulating cases."

Professor Weitz helped develop an on-line, interactive map, to show how big of an infection risk there is for people in Georgia, based on all the daily numbers.

It allows people who are planning, for example, to attend an event or a class or a business appointment or other gathering to select, on the map, how many people are expected-- 10 or 20, or 50, or more.

The map instantly crunches all of the current COVID data in each county to allow people to see what the chances are that at least one person in the group will be infected, possibly infecting others.

With the on-line interactive map set for a prospective gathering of 50 people, for example, the chances are sky-high that at least one person would be infected--more than an 80 percent chance, as of Wednesday's numbers, in metro Atlanta counties such as Fulton, DeKalb, Gwinnett and Cobb. And the chances are even higher in many rural counties, like Jefferson County near Augusta, where the numbers calculate that there is a 99 percent chance that at least one person in the group there will be infected.

Professor Weitz said the map's numbers are updated, automatically, daily. He sees the map as a tool for self-defense.

“To inform people about the risk, so that they can take preventative measures like wearing a mask, or deciding to, maybe, not go to that indoor event, or eat outdoors if they’re going to a restaurant.”