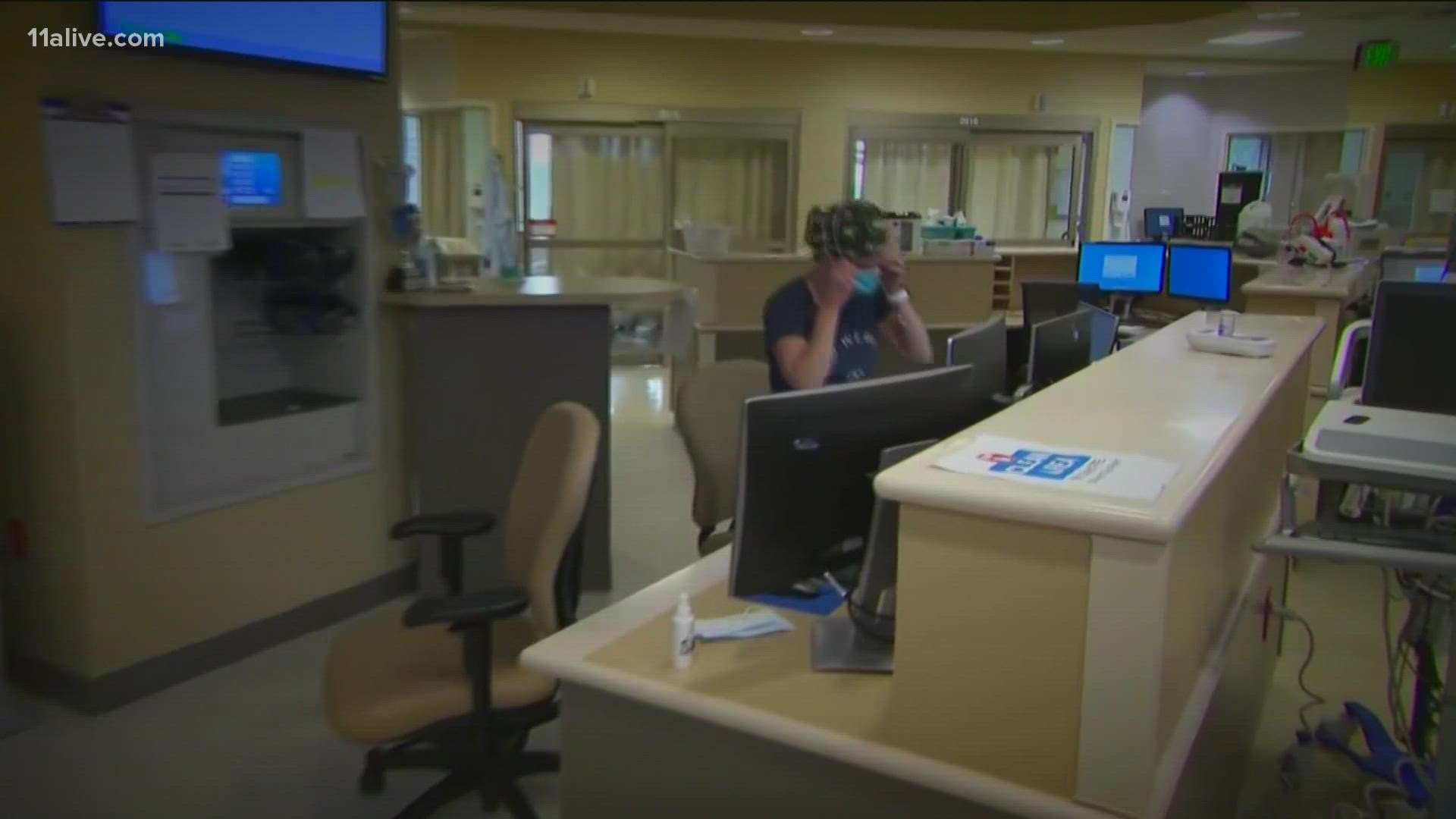 ATLANTA — "I was diagnosed with esophageal cancer in March. I went through chemotherapy and radiation," said Scott Hendrickson. Hendrickson said he thought he had heartburn, but soon learned it was esophageal cancer. He went through all the emotions and physical pain that comes with fighting the disease. But with a surgery date set, he had hoped his treatment would go as planned.

The surgery was scheduled back in March, but due to the rise in COVID cases and limited ICU beds, the surgery has been pushed back.

"I was scheduled for surgery last Thursday. They called Wednesday night and said the beds were filling fast with COVID patients that were unvaccinated," said Hendrickson.

He said his surgery was sidelined as a result, and there were about eight other people in the waiting room with him who also had their surgeries canceled.

The hospital where he is being treated is in Georgia Hospital Region D, which covers Fulton and Dekalb counties. Those ICU units are currently at 92.5 percent capacity. In addition, many hospitals in the metro area have had a difficult time with staffing, particularly not having enough nurses. A vast majority of COVID patients who end up in the hospitals are unvaccinated, according to data from the state's health department and the Centers for Disease Control.

"They’re rolling the dice by not getting vaccinated," Hendrickson said. He added that the same people are getting priority medical care.

"Personally I feel, it’s America and it’s your right not to get a shot but you also have to pay the consequences for your actions and they should go to the end of the line and not to the front of the line," he said.

Instead of incentives for getting vaccinated, Hendrickson said there should be consequences for the unvaccinated, such as higher healthcare premiums, similar to those who smoke.

He said this is a burden entire families share because he still has to go into the hospital before dawn to be prepped for surgery, only to find out after hours of wait that there aren't enough ICU beds.

Hendrickson said his surgery is a serious procedure. It requires a third of his esophagus and a third of his stomach to be removed, repaired and then reattached. He would need a feeding tube and ICU bed for days.

Just like this time last week, he and his family are preparing for surgery once again Tuesday morning, not knowing if it will actually happen.

Most hospital categorizes urgent or essential surgeries to treat something that is "threatening to life, limb or organ," according to Piedmont Healthcare. Meanwhile, elective treatments are for anything that can safely wait, such as a routine scheduled screening like a colonoscopy. In addition, there's a category called "time-sensitive" that falls somewhat in the middle of the two categories above.

Currently, Northside Hospital is reporting that they are not postponing any treatments, while Piedmont reevaluates on a weekly basis.

In a statement, Emory Healthcare said they're "evaluating surgical cases on a daily basis across all our hospitals and outpatient centers to determine if a case needs to be rescheduled, based on the patient’s health and hospital capacity." However, they did state that they have recently had to postpone some surgeries to due increases in patient numbers due to the COVID surge.