Cobb school board member: 120+ teachers call out sick after stalemate with district over return to in-person learning

A group of educators wants changes made in the Cobb County School District after three teachers died from COVID in a month. 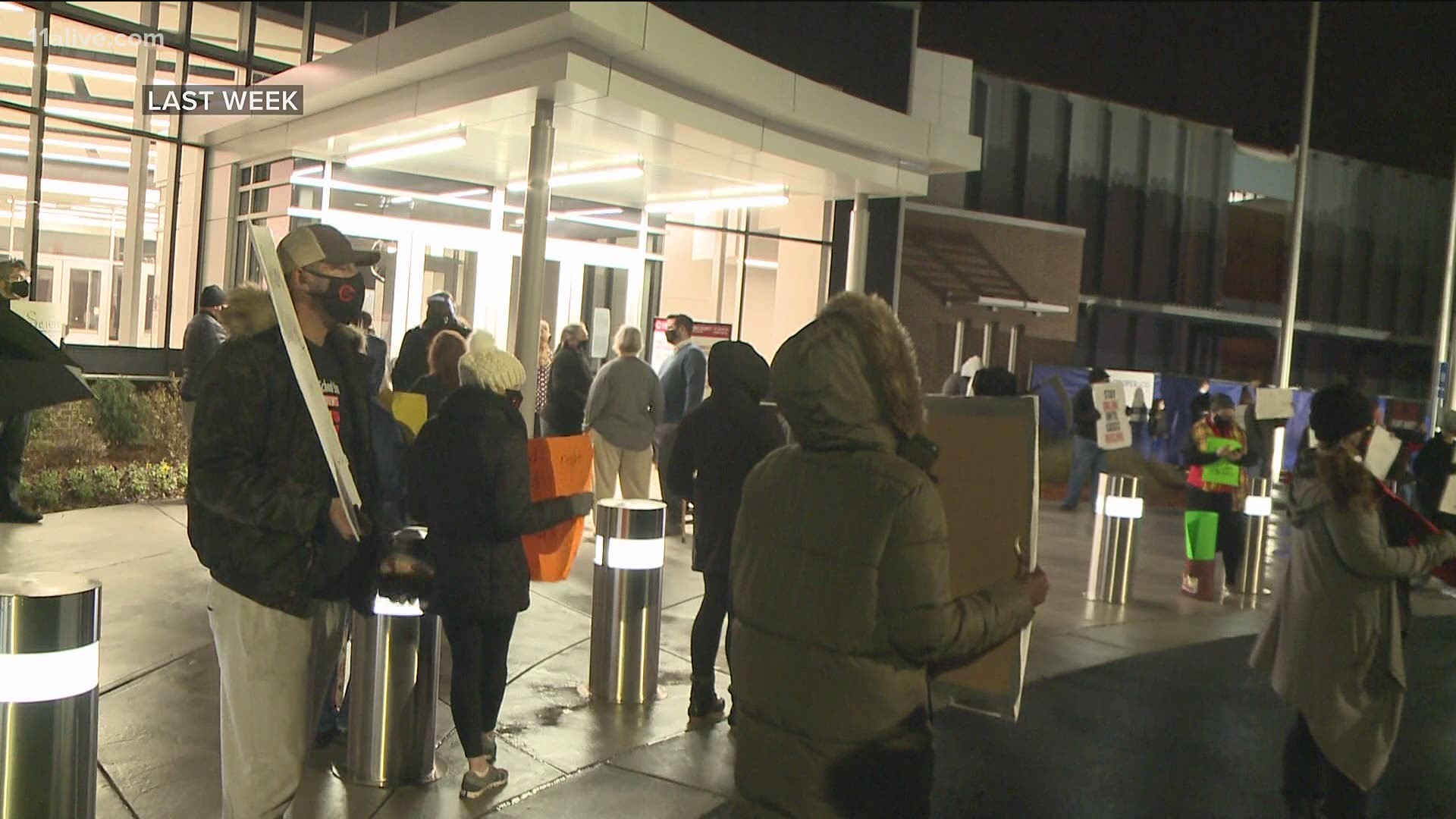 COBB COUNTY, Ga. — The tug-of-war continues in Cobb County over whether resuming in-class teaching in public schools is safe or dangerous amidst the high rates of COVID there.

More than 120 Cobb County teachers called in sick Monday, according to one school board member. The superintendent's office would not confirm that number. This comes as more than 60 percent of students returned for in-person learning even as some teachers continue to demand the district go virtual.

Those teachers insist it's not safe to have so many kids back in the classroom after three educators died in the past month from COVID-19.

“We’re talking about lives here," Connie Jackson, the president of the Cobb County Association of Educators, said matter-of-factly. "We are losing lives in the school district due to this."

In an interview with 11Alive Monday, Jackson said changes need to happen now - and need to come from the top.

“The superintendent has always said that he is data-driven. That’s what he’s always said," Jackson said. "The data is screaming at him right now."

Jackson said the number of cases and deaths within their school district is concerning to her and other teachers.

"We’ve had enormous numbers of cases - in the thousands at this point - and unfortunately, we’ve had three teachers pass away; one on Christmas Day which was horrible, then two this past Thursday," Jackson said, adding that there were more teachers "in the hospital and so many out sick we had to go all virtual last week because there was no staff in the schools."

At least two board members and the superintendent in Cobb County opted not to fulfill one deceased teacher's dying wish that they wear masks during a moment of silence at Thursday's board meeting, which drew ire from teachers.

"Although we have not noticed any significant difference in teachers reporting to be 'sick,' all teachers will be required to provide a doctor's note," the district wrote in a statement to 11Alive.

"Our teachers want to teach," the school's website says. "They are in our classrooms teaching more than 60 percent of students face-to-face while also supporting those families who have chosen to remain remote."

“Our teachers are scared," Hutchins said Monday evening. "Today was challenging. We had a lot of teachers to call in sick. They want to be responsible. They want to make sure that if they have symptoms, that they check out those symptoms first before they come back into their school building.... I have not been made privy if there was some coordinated effort to call out sick.... What I have been hearing from educators is, 'I'm afraid, I am sick, I have symptoms that could either be a cold, the flu or COVID' and they haven't had a chance to get tested, yet."

Hutchins is one of three Cobb School Board members who signed a letter to Gov. Brian Kemp--written by Board Member Dr. Jaha Howard--along with 10 other school board members from across metro Atlanta, asking the governor, in part, to move educators up in line to get the vaccines as the vaccines become more readily available.

Credit: Provided
Several educators from districts across the metro sent a letter to Gov. Kemp asking for teachers to get priority for COVID-19 vaccines.

As for what happens next in Cobb, Superintendent Chris Ragsdale and the school board are not, according to Hutchins, talking with each other about in-class learning, and about the impact of the high rates of infections currently in the county.

"There is no communications, currently, between the Board of Education and the superintendent in regards to COVID or what those guidelines are," Hutchins said. “I think it would be very important for our superintendent to actually lay out what these metrics are and what are the determinations that are being used, to ensure the safety of our community, as it relates to COVID spreading here in Cobb," Hutchins said.

Meanwhile, Jackson, the Cobb Association of Educators president, said there is a list of three changes they want to see right away.

First, she said, is that teachers with pre-existing conditions be given a chance to stay virtual. Also on the list, staggered schedules for in-person learning to cut down on the number of students in each class. Lastly, Jackson said the board needs to make the mask policy enforceable.

"Right now, there’s no discipline or anything behind it and that’s a problem,” she said.

Jackson said the policy is even more important for other staff members - especially bus drivers.

"We've had tons of bus drivers go down because, on buses, you can't enforce the mask because they're behind you," she said. "You're trying to drive, and that's pretty much your first priority when you're driving a bus, and kids are taking their masks off and kids are being exposed."

In response to concerns for the spread of COVID-19 amongst students and staff, the Cobb County School district said there are already protocols in place to protect all staff, including specific protections in place for bus riders and drivers.