Gaby Araica is one of many people across the country stepping up to help cover the shortage. But the CDC and WHO says use of such masks should be limited. 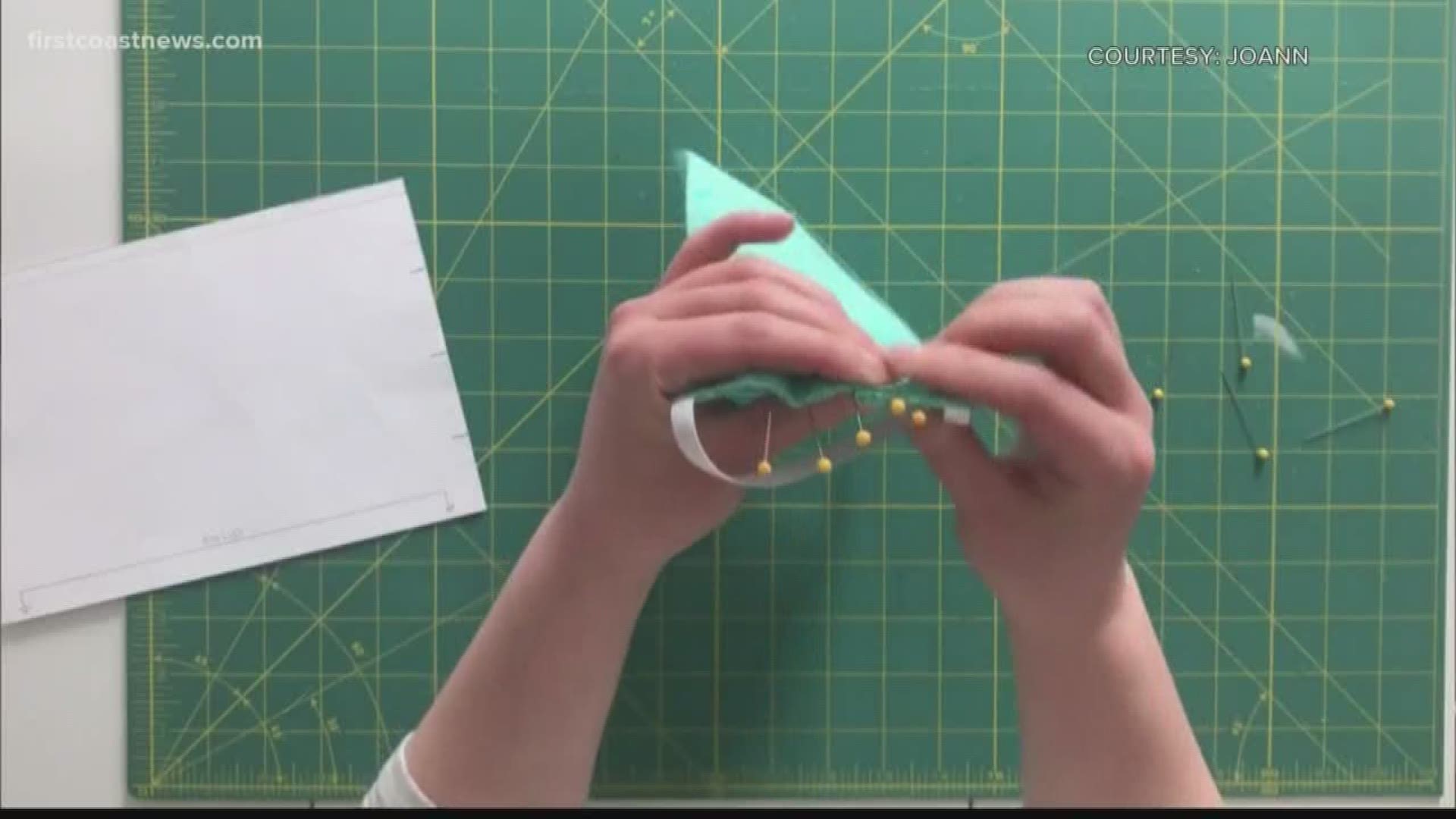 A 10-year-old Massachusetts girl has churned out 24 face masks and counting to help with the shortage in her community. She's one of the many volunteers across the country stepping up with their sewing skills to help keep hospital workers safe as the coronavirus continues to spread.

Araica reportedly plans to donate the masks to nurses in her neighborhood.

Despite that, the TEGNA Verify team found that according to the Centers for Disease Control and Prevention and the World Health Organization, such homemade masks are only to be used when caring for someone who is sick or if you, yourself are sick.

RELATED: VERIFY: CDC, WHO do not recommend homemade masks

Bill Purdue waterproofs basements for a living, but he has spent the past few days in his buddy's Washington, Indiana, auto trim and upholstery shop cutting rectangles of cotton fabric that his friend sews into face masks.

Fashion designer Briana Danyele left Italy last month to return to her mother's Greer, South Carolina, home, where she has turned the living room into a mini sewing factory, making masks that she embroiders with the words, "We Got This!"

They're among scores of people answering pleas from hospitals, doctors and nurses so desperate for personal protective equipment amid the viral pandemic that they've turned to the public, saying do-it-yourself face masks are better than nothing.

And for those sitting at home worrying as the virus strains hospitals and the economy teeters, sewing masks makes them feel less helpless.

“Whatever it takes to get the job done, that's what I want to do,” said Purdue, 57, whose daughter works at the women's hospital in Evansville, Indiana. He and his friend Mike Rice responded to a Facebook post last week from Deaconess Health System in Evansville asking the public for help.

The efforts mirror those in other countries, including Spain, where mask-making volunteers include a group of nuns and members of the Spanish Air Force. Around 500 masks a day are coming off sewing machines at the Paratroop School in Murcia, in the country’s southeast, according to the Air Force’s Twitter account.

In Belgium, what began as a one-woman operation about a week ago grew to a small army of home-sewing mask-makers within days. In Kosovo, inmates in a women's prison volunteered to make masks.

For most people, the new virus causes only mild or moderate symptoms, such as fever and cough. For some, especially older adults and people with existing health problems, it can cause more severe illness, including pneumonia. The vast majority recover.

But the virus is spreading rapidly and starting to max out health care systems in several cities.

Deaconess spokeswoman Pam Hight said the hospital system realized it could face a shortage if local infections skyrocket like they have elsewhere. So officials produced and posted a how-to video that has been shared across the country.

“We had people who wanted to ship them to us from all over the United States and we started saying, ‘Please, please use them in your communities,'" she said. “It makes your heart warm; people are so good.”

She said Deaconess expects to collect thousands of masks this week at an off-hospital site and sanitize them before distributing them to nurses and doctors or sending them to local nursing homes and homeless shelters.

Providence St. Joseph’s Health in the hard-hit Seattle area last week put together kits using special material and distributed them to people willing to sew them. But the company said Tuesday that it was discontinuing the effort because local manufacturing companies had begun making masks and face shields quickly and on a larger scale.

Federal officials had previously advised hospital workers to use surgical masks when treating patients who might be infected with coronavirus amid reports of dwindling supplies of fitted and more protective N95 respirator masks.

“If nurses quit or become too fatigued or even become ill themselves, then we don't have a frontline anymore,” said Wendy Byard of Lapeer, Michigan. She began organizing friends to make masks after learning her daughter, a nurse at a suburban Detroit hospital, was told to wear the same mask all day.

Last week the CDC quietly updated its guidance, saying hospitals that run low on surgical masks should consider ways to reuse them or to use them through an entire shift. And if hospitals run out, the CDC said, scarfs or bandanas could be used ”as a last resort,” though some health officials warned cloth masks might not work.

Mary Dale Peterson, president of the American Society of Anesthesiologists and chief operating officer at a Corpus Christi, Texas, children’s hospital, said she declined volunteers’ offers to make masks. She said construction and manufacturing industries instead should donate or sell the high-grade masks they have to hospitals.

“It would be only an extremely, extremely last resort that I would have my staff” wear homemade masks, she said. “I really hope it doesn’t get to that point in the U.S.”

At the Missouri Quilt Museum in Hamilton, Missouri, board members asked local hospitals if masks were needed and “they emphatically said yes,” said director Dakota Redford. Soon other health care providers, including ambulance crews and nursing homes, were requesting masks.

“This has been a true grassroots effort that has exploded across the country in the quilting world,” she said.

Businesses also are stepping up.

Crafts chain Joann Stores is making all of its 800-plus stores available for up to 10 people at each location to sew masks and hospital gowns, offering sewing machines and supplies, spokeswoman Amanda Hayes said.

Hayes said the number of people allowed in the stores adheres to CDC guidelines, the sewing stations will be six feet apart and staff will continuously sanitize the work areas and materials. The company also has special kits for customers who want to make masks at home.

“We’re enabling people to feel like they are contributing at a time when we don't have control,” Hayes said.

In Baltimore, almost 285 volunteers with 618 3D printers between them are making plastic face shields for Johns Hopkins and other area hospitals and dropping them off at a maker space called Open Works. Executive Director Will Holman, who organized the effort, said he laid off 21 part-time employees last week because of the virus but has rehired some to assemble, sterilize and package the shields.

Danyele, the South Carolina fashion designer, said she made about 200 masks bound for a local nursing home and hospitals in Florida, Georgia, Indiana and Illinois.

“If I'm one person creating 200 masks, imagine what we all could do," said Danyele, 24. "It's super sad that we’re at this point, but this is encouraging.”