Here's a recap of the governor's announcements. 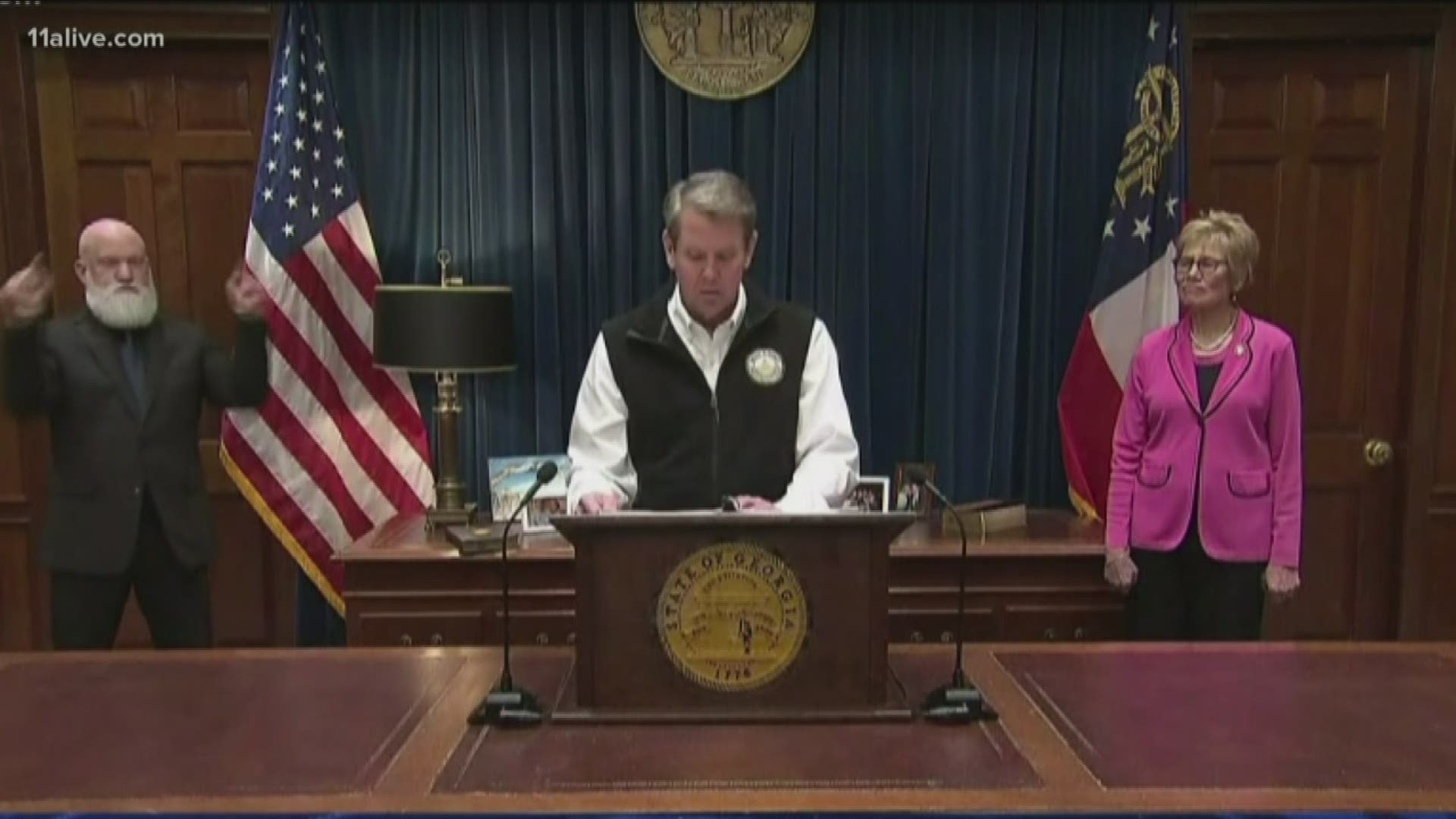 ATLANTA — As the state enters its second week of mass closures and school shutdowns to control the spread of the coronavirus, Gov. Brian Kemp is issuing even more measures in hopes of curbing the pandemic.

In an update from the Capitol Monday, Kemp unveiled a new shelter-in-place mandate that applies to only some Georgians, while also unveiling new steps the state has taken to get vital supplies, likes masks and gloves, to hospitals and healthcare workers who need them. He also announced an extension of the state tax deadline, a move mirrored in a federal mandate from President Trump.

Here is a breakdown of the most important updates from the governor's press conference:

As of Monday, March 23, the governor confirmed that the number of COVID-19 cases across the state has "dramatically increased" to stand at 772 positive cases of the coronavirus in 67 counties.

So far, there have been 25 deaths across the state of Georgia related to the coronavirus outbreak.

"As we mourn, I ask my fellow Georgians to lift up their loved ones in prayer. Please keep them in your hearts and minds," Kemp asked.

Kemp said the state is starting to see the devastating impact of the virus on "medically fragile" populations, especially in long-term care facilities.

RELATED: 'This was never meant to be a vacation; It was meant to save lives' | Atlanta ER doctor pleads with people to stay home

As of Monday, Kemp said the state has now conducted more than 4,000 COVID-19 tests, with more than 1,200 of them conducted by the Georgia Department of Public Health. The rest have been conducted by private labs.

Gov. Kemp said there are currently 23 testing sites for coronavirus across the state. While they are currently conducting testing for COVID-19, they are only open to those who have a referral, and are limited to vulnerable populations, including the elderly, first responders, healthcare providers and long-term care residents and staff

"We must protect those who protect us, and that is why we have these new testing sites in strategic locations statewide" Kemp said.

The testing sites across the state include:

11Alive
STATE TESTING SITES: Gov. Kemp said there are currently 23 testing s... ites for coronavirus across the state. While they are currently conducting testing for COVID-19, they are only open to those who have a referral, and are limited to ONLY the elderly, first responders, healthcare providers and long-term care residents and staff "We must protect those who protect us," Kemp said.

Gov. Kemp announced he would be extending the tax deadline in Georgia to July 15, in accordance with the new federal tax filing deadline announced by President Trump last week.

Specifics on the plan, however, have not been released, though Kemp said that guidance on the move will be released in the days ahead.

Kemp said over the weekend, the task force distributed 268,000 N95 surgical masks to all 142 hospitals within the state of Georgia. It also distributed 30 ventilators to two of Georgia's hardest-hit counties: Dougherty and Floyd counties.

Kemp said Georgia will receive a second delivery of PPE from the US Department of Health and Human Services within the next five days. GEMA has also placed an order for respirators, which are scheduled to be delivered to the state’s warehouse this Friday, with more orders expected to be placed.

"Right now, one of our biggest challenges is healthcare capacity in hotspots across the state," said Gov. Kemp during the briefing.

In Dougherty County alone, there are currently 64 cases of coronavirus, with six deaths from COVID-19. Kemp said capacity is becoming an "acute problem" for Phoebe Putney Memorial Hospital, treating most of those patients in the Albany, Georgia area. To help, Kemp said the state will reopen Phoebe North, which is currently closed. With the reopening, Kemp said the area will have at least another 26 rooms to treat patients.

But he said the hospital will likely not be the only one to face hurdles.

RELATED: Grady Hospital 'at or near capacity' amid coronavirus pandemic as mayor says 'breaking point' is imminent

Among the options, Kemp said he has asked federal officials to allow the state to keep the temporary medical facility at Dobbins Air Reserve Base - once cruise ship passengers depart. It will offer roughly 200 patient beds, if needed.

Kemp said the state has also completed construction of an isolation zone to hold as many as 20 emergency housing units. The campus, Kemp said, will offer another 240 dorm rooms for patient use.

A third option, according to Kemp, is to use all available outpatient surgical centers, as suggested by Vice President Mike Pence.

"As part of this initiative, we urge healthcare providers to consider canceling elective procedures to preserve medical supplies and free up resources, including workers and treatment space," Kemp said. "So far, we have identified nearly 600 additional beds beyond what our hospitals currently offer, but our work is far from over."

Finally, Kemp said the state is working with the Army Corps of Engineers for arena space and large buildings, and Kemp added the state is considering the conversion of vacant properties for more hospital space.

Meanwhile, in a move to bolster the number of healthcare workers, Kemp signed an executive order that would suspend restrictions against the practice of medicine by workers whose licenses became lapsed within the past five years. Graduate nursing students who have yet to take their licensing exams would also be allowed to seek temporary licensure through the Georgia Board of Nursing.

Over the past few weeks, Kemp said the state has seen a large increase in the number of applications for the Supplemental Nutrition Assistance Program, or SNAP.

"Without question, families are facing hardship in this time of need," Kemp said.

As a result, Kemp said state officials are working to allow families who participate in SNAP to access the maximum benefit amount for March and April.

Right now, according to the state, the average monthly SNAP benefit per Georgia household is $225. With this expansion, Kemp said about 1 million Georgians should expect to see an additional $100 in nutrition benefits.

"This change could be a major support to senior citizens in our state, who typically receive about $15 in SNAP benefits each month. This supplement will allow them to get the maximum benefit amount for their household size, which is $194 for a household of one," Kemp said.

Shelter-in-Place order - for some

In the final announcement from the Monday briefing, Kemp said he is issuing an executive order that will require certain individuals with an "increased risk" of complications from  COVID-19 to "isolate, quarantine, or shelter in place."

The mandate would cover those who live at long-term care facilities, have chronic lung disease, are undergoing cancer treatment, have a positive COVID-19 test, are suspected to have COVID-19 because of their symptoms and exposure, or have been exposed to someone who has COVID-19.

"The Department of Public Health will promulgate rules and regulations to implement this order and define how these individuals can access essential services, travel, and receive visitors in end-of-life circumstances," Kemp said.

As part of the order, all bars and nightclubs within the state would be forced to close. The order would also ban all gatherings of 10 or more people unless the recommended 6 feet of social distancing space can be maintained at all times.

"The Department of Public Health will be empowered to close any business, establishment, non-profit, or organization for noncompliance," Kemp added.

This order will go into effect at noon Tuesday and expire at noon on Monday, April 6. The Department of Public Health will have the authority to suspend operations of a business or organization who does not comply.

"These measures are intended to ensure the health and safety of Georgians across our state, and I ask for everyone’s cooperation over the next two weeks," he said. "This fight is far from over, but we are in this together. Look out for your fellow Georgians and pray for the continued safety of our first responders, healthcare workforce, elderly, and medically fragile."

Another attempt to move ahead on virus aid package snags