Mayor Keisha Lance Bottoms was in attendance, by video, of the meeting and praised New York's handling of the pandemic. 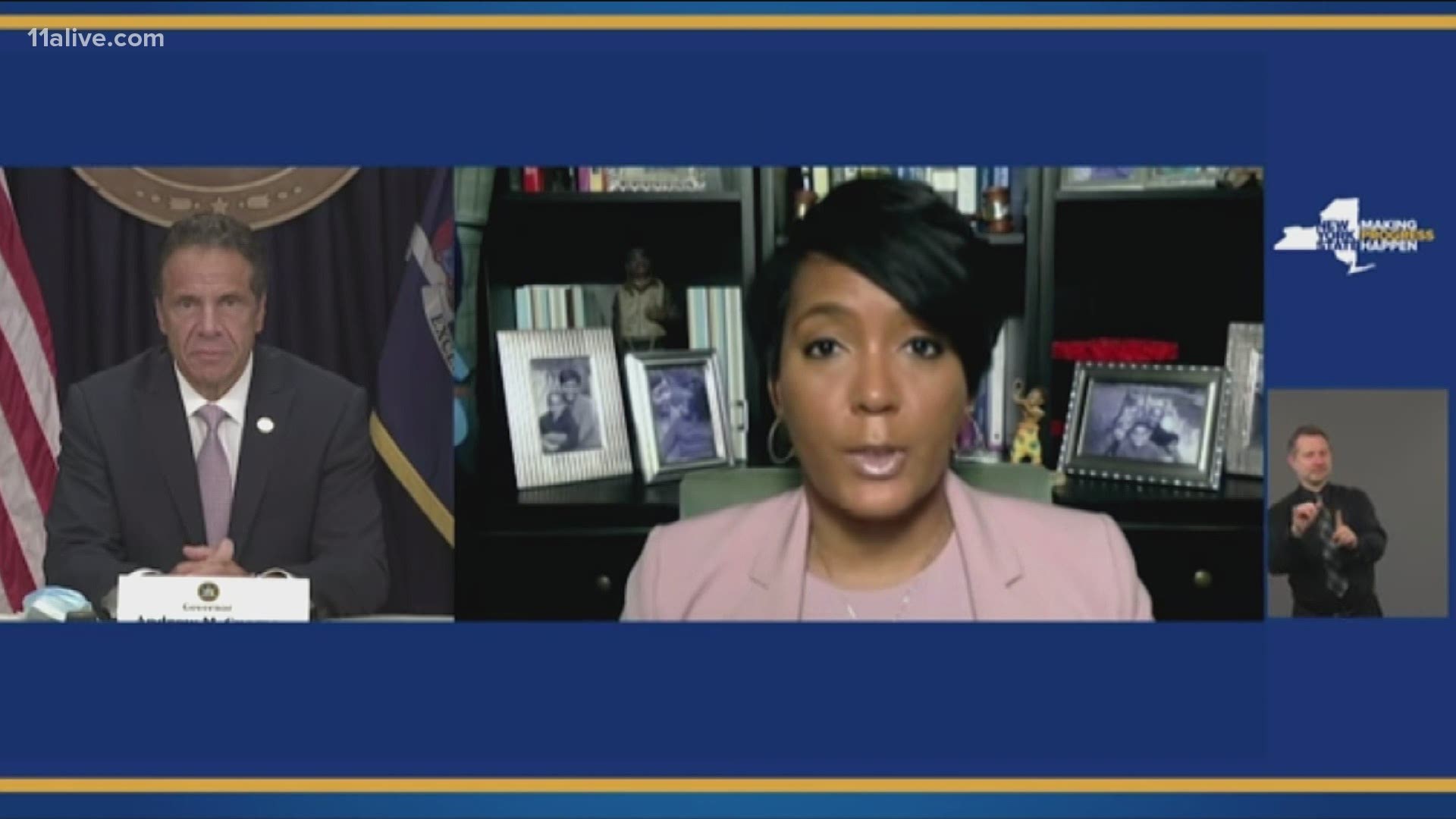 NEW YORK — A state that dealt with one of the nation's largest COVID-19 outbreaks has now offered its own resources to Georgia's capital city.

Governor Andrew Cuomo announced on Monday, in a joint press conference with Mayor Keisha Lance Bottoms, that he would be sending testing and contact tracing teams to Atlanta.

He made mention of both the virus and ongoing unrest following the death of Rayshard Brooks.

"We just want to tell you, on behalf of New Yorkers, after what we've gone through that you are exactly right, Mayor; what you are saying and what you are advocating," he said.

Bottoms suggested in the meeting that she came into the fight against COVID-19 not knowing "we would have to go it alone in so many ways."

"I thought it was more geared toward the lack of leadership we have at the federal level, but it has been equally challenging at the statewide level," she said.

Mayor Bottoms has recently found herself in a very public disagreement with Georgia's Gov. Brian Kemp over the COVID-19 response, the handling of recent protests and a violent July 4 in the city.

The mayor recently announced that Atlanta would move back to "Phase 1" in handling COVID-19 - essentially re-closing many businesses to foot traffic once more.

Kemp responded that such a move could not be legally enforced ahead of his own statewide order.

"In Atlanta, when we saw that we were in a very different place than the governor's leadership was taking us, we convened an advisory committee in our city compromised of health experts, small business owners, Fortune 500 representatives, college and universities - it's just really a representation of our community," Mayor Bottoms said. "They made some very clear recommendations of where we needed to go with reopening with a phased approach."

She mentioned an increase in cases and concern hospitals were beginning to max out. Bottoms also joined ordered a mask mandate as other cities in Georgia.

"You told us very clearly that if we didn't do things differently in our cities and states, we will find ourselves in the same situation that New York was facing," Bottoms said. "And, unfortunately, you were correct because throughout the South, especially, we are getting there in rapid order."

Cuomo suggested he was frustrated that other states didn't take similar action to New York when the virus hit them.

Now, he said, New York is fending off new cases from states that are now seeing theirs on the rise - Georgia among them.

"We have a cluster of cases in an upstate county called Rensselaer - people came up from Georgia, they had the virus and they infected New York and then it took off," he said.

He was referring to a recent Delta-owned flight that traveled from Atlanta to Albany, New York. At least three residents from nearby Troy were on the flight and tested positive for the virus a day after arriving home.

Gov. Cuomo went on to offer assistance in any way he could, to which Mayor Bottoms suggested help with expedited testing and contact tracing.

Cuomo didn't suggest what form the addition help teams will take or provide an exact date for their arrival at the meeting.