Most major districts in metro Atlanta are providing school-level data, but Cobb has decided against releasing that information. 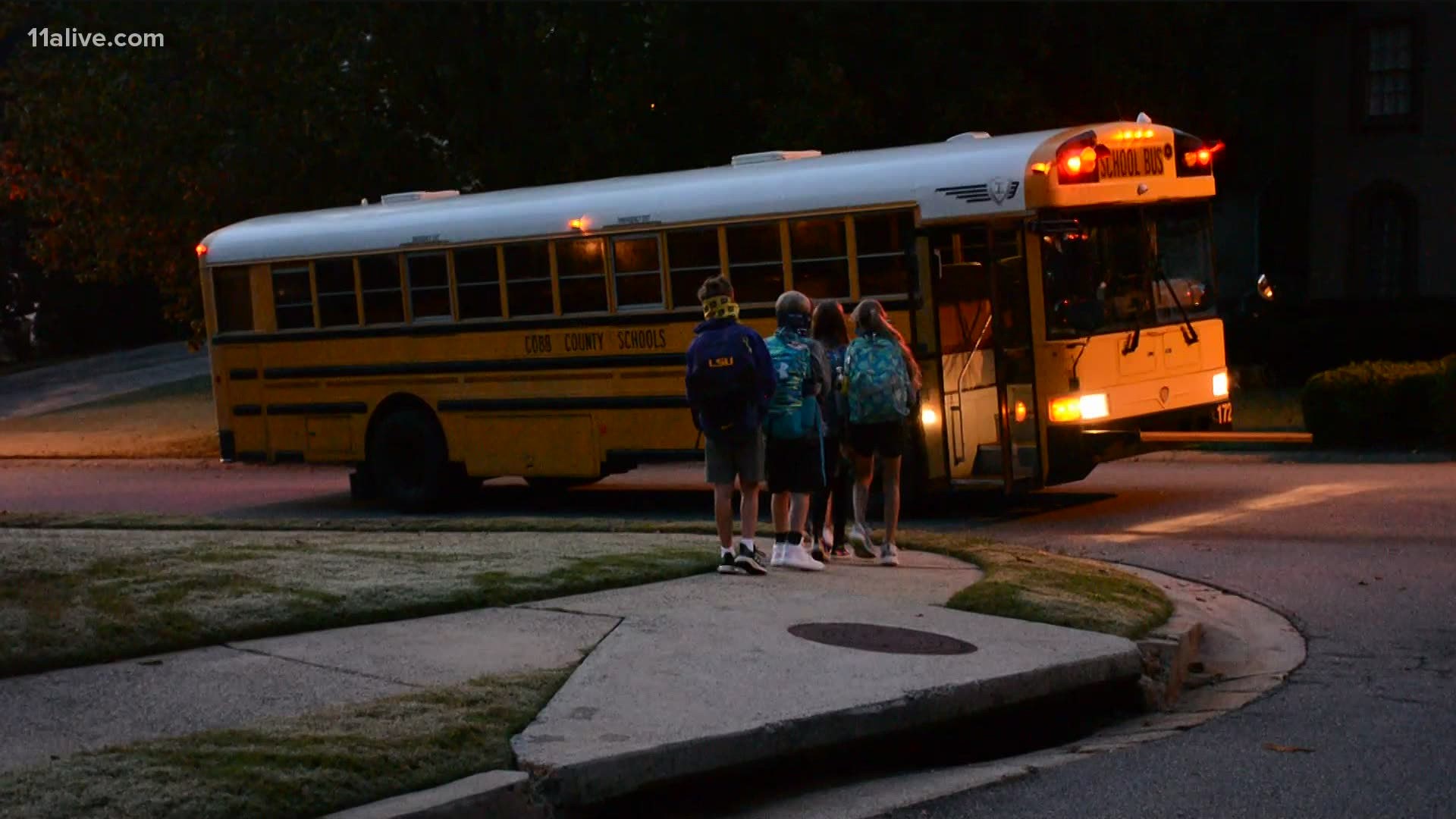 COBB COUNTY, Ga. — The school buses are out in Cobb County. On Monday, the district allowed elementary school and many special needs students to return to class.

While students seem happy to be back in the classroom, some parents are a bit uneasy. They want to know why the district is refusing to release COVID-19 case data by school.

The district will notify parents if their child has come into direct contact with someone who has tested positive or is believed to be positive, but other than that, parents will have to be content with a districtwide total at the end of each week.

Some parents say that’s not enough. They argue there’s a big difference between a COVID-19 case at a school 20 miles away and a positive case in their own child’s school.

On social media, they vented calling the lack of disclosure dangerous. One teacher even commented that she had health conditions that put her at risk. She needs to know what’s happening in her school’s own hallways.

“Job one for parents is ensuring the safety and security of their children,” Dr. Harry Heiman with Georgia State’s School of Public Health said.

He criticized the state for not setting stricter, clearer guidelines for reporting COVID-19 case data to the state and to the public.

RELATED: Clayton County Schools begins survey for parents to give input on students returning to class

“We need to ensure that [it] is communicated with the public in a way that it's understandable, meaningful and actionable. And we're failing in that regard,” said Heiman.

The Cobb County School District website says it’s following the public health department’s recommendation and that, due to Federal and state medical and privacy laws, it can’t give more detailed information.

But when 11Alive's investigative team, The Reveal, asked the Cobb and Douglas Public Health Department about that recommendation, they said it was the school’s choice. They did encourage those districts that chose to release the data to be careful not to do it in a way that might identify any students.

The Reveal surveyed metro Atlanta schools that had resumed face-to-face teaching and found most major districts like Gwinnett and Fulton were providing school-level data. Cherokee, Hall, Floyd, Forsyth, Oconee, and Paulding county school districts were also providing school level COVID-19 case reports. Even Marietta City Schools, which is in Cobb County, made the decision to release the information.

“I don't believe that they're legally allowed to withhold that information at all,” Attorney Lester Tate said.

The Reveal asked Tate to review the state’s privacy laws and what data can be withheld from the public.

The Georgia Department of Public Health (DPH) is collecting school-level data but denied The Reveals’ open records request for access. In the denial, DPH said it was concerned schools will stop reporting data if DPH turns around and shared it with the public.

“While that concern might be well-founded, there may be school districts that do underreport or fail to report," Tate said. "It's not an excuse for the Department of Public Health to not release that information to the media and to the public through the Georgia Open Records Act."

In a written statement DPH said, “The Department is concerned about possible non-cooperation of schools in reporting data and has decided to maintain the confidentiality of the weekly COVID-19 school reports in accordance with Ga. Comp. R. & Reg. § 511-2-1-.03 (“The following records shall be deemed confidential and shall not be subject to public inspection: all reports submitted to a county health department or to the Department pursuant to this Chapter; all information requested or collected as part of an outbreak or cluster investigation. . . .”)

O.C.G.A. § 50-18-71(a) states that “All public records shall be open for personal inspection and copying, except those which by order of a court of this state or by law are specifically exempted from disclosure.” Because Ga. Comp. R. & Reg. § 511-2-1-.03 specifically exempts the reports from public inspection, they fall under 50-18-71(a) and are exempt from disclosure.”

“I think, if there were a specific outbreak in a specific county and they said we're going to hold the statistics for this county until we're able to investigate this and find out about it, that perhaps might be legitimate, particularly if it's in the interest of the public health. But it's certainly not true that you can just say, well, we're investigating all one 159 counties so we’re not going to release any data on any of them,” Tate said.

One parent commented on social media that it matters more how many people are going to the hospital since those are the serious cases. For months, The Reveal received data on the number of COVID-19 patients in each hospital. Right now, that information isn’t being released either.