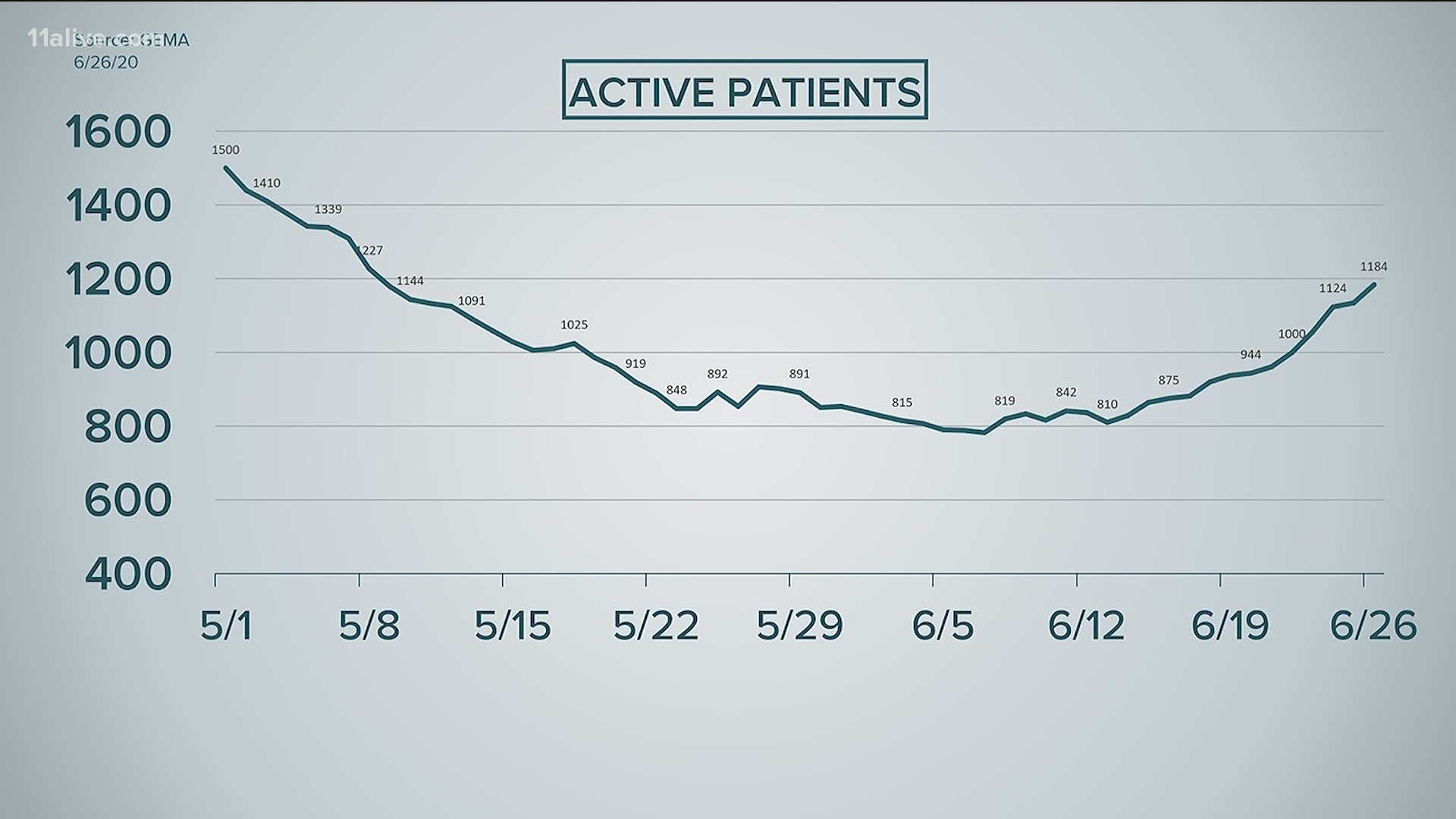 ATLANTA — Georgia has broken a new record – and not the kind we like to see.

At the beginning of June, Georgia's COVID-19 numbers were fairly flat and people grew more comfortable with heading outdoors and to family events. But this past week, attitudes toward the virus have started to shift as the state again sets a new record in the number of daily COVID-19 cases reported.

On Friday, the Georgia Department of Public Health reported 1,900 new COVID-19 cases. On Saturday, we saw those numbers first jump up with 1,800 cases and they have remained high ever since.

“There’s no other infectious diseases that go from 40 percent of the people having no symptoms to some getting intensive care, some getting intubated, some getting ventilated and some dying," Dr. Anthony Fauci said. "So, that depending on where you are in that spectrum, you have a different attitude to this particular thing.”

June, in fact, has seen a series of milestones in the effort to slow the virus’s spread. On Monday, for the first time in more than a month, Georgia started to see a consistent rise in the number of people going to the hospital, reflected in the graph below. We now have more than 10,605 people who have needed intensive medical care during this pandemic.

The daily increase in new patients fluctuates a lot from one day to the next. On Friday, there were 148 new hospital diagnoses reported. Many analysts pay more attention to the number of active patients provided by Georgia Emergency Management. The higher it goes, the more strain on our medical system.

But, when you look at how that number moves in relation to the new COVID-19 cases, there is a bit of good news.

From June 5 to 11, when patient counts were dropping, data suggested about 16 percent were needing medical care. Now, from June 19 to 25, that percentage is down to 10 percent even with more confirmed cases.

The math isn’t as clear cut. We don’t know exactly when those hospital patients arrived. Some have likely been there for weeks, so percentages are just a ballpark. But they do match other data that shows younger, less ill people are getting tested and accounting for part of the spike we’re now seeing in cases, shown in the graph below.

That brings up another milestone: those 18 to 29 years old have now surged ahead of all other age groups with the most positive test results.

“Whereas before we told them to stay home, we are now telling us to be tested. And this is a great change for us because it allows us to find the asymptomatic and the mild diseases that we couldn’t find before,” said Dr. Deborah Birx who heads the White House’s COVID response.

Exactly two weeks ago, Gwinnett, despite having a slightly smaller population, took the lead in counties with the most cases, marked in the graphic below.

On Friday, Governor Kemp visited a testing site in Lilburn, which sits in one of the zip codes most impacted by the virus. During the White House press briefing, Gwinnett was listed on the top ten emerging counties for high case counts. But when talking with the media, Governor Kemp remained calm.

“The severity, the acuity of patients is not nearly what it was during the pandemic," he said. "That being said, we’re not letting our guard down. We’ve got to continue to fight the fight hard every day.”

While all of this has prompted some states like Florida and Texas to reconsider efforts to reopen the economy, Governor Kemp says he is not considering any new restrictions and says he will continue to leave it to individuals and businesses to decide whether to wear masks.