Five times in the past ten days, Georgia has broken the previous state coronavirus records, including those we set back in April. 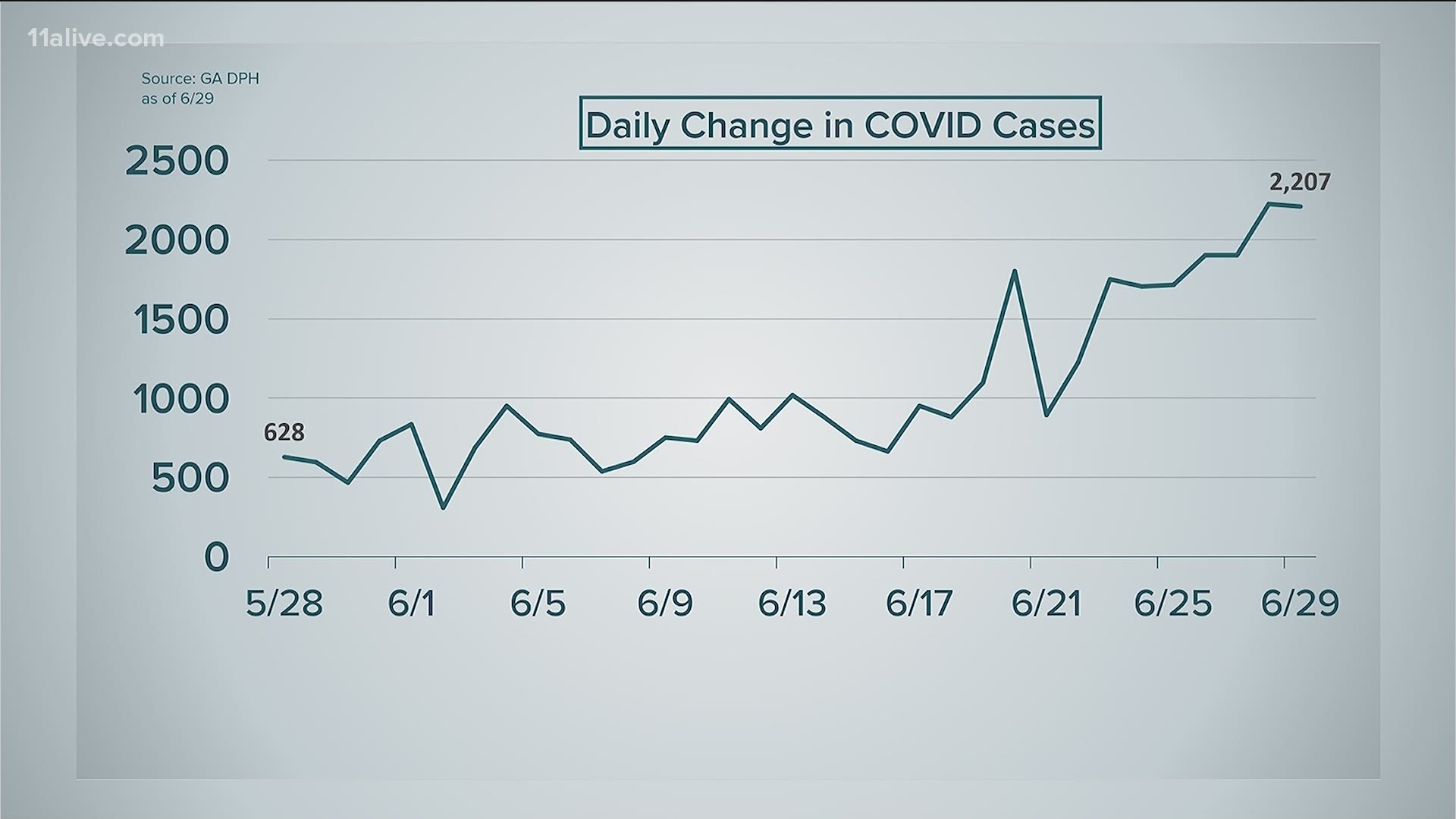 ATLANTA — On Monday, Georgia added another 2,207 new cases of COVID-19. It's important to note, there is a big lag in the time it takes between a person contracting the virus and when their positive test numbers are reported to and by the Georgia Department of Public Health.

However, with the data available, here is what we know about the current spike in COVID-19 cases.

Over the past month, Georgia's daily number of new COVID-19 cases have continued to go up with a few drops in the numbers here and there.

Below is the breakdown of Georgia's top daily increases, since the pandemic started.

On Friday, the state set a new record for new cases at 1,900 and then on Saturday, broke that record with 1,990 new cases. By Sunday, the state had broken the record a third time, with 2,225 total new cases.

Monday’s numbers were slightly lower but still significant at 2,207 new confirmed cases, which is 18 fewer than the previous day. A significant portion of new cases remains to be among younger adults.

“Preliminarily, it suggests that the younger adults are not taking the precautions regarding the social distancing and the wearing of the masks and that they might have frequented the establishments that have been opened,” said Swahn.

Over the past month, the number of newly reported deaths from the virus has stayed relatively consistent.

As of Sunday, Georgia had more than 2,700 total deaths. Monday, the state added six more deaths to that number. But experts, like Georgia Tech's Aditya Prakash, an associate professor of computing, say there are likely several reasons why.

A graph of current hospitalizations, as of Monday, shows a steady downward trend through May, but those numbers started going up again in early June.

Monday, the state reported 1,359 hospitalized patients with COVID-19, bringing the weekly average up 26 percent from the previous week.

“Even if the burden or the illness for those younger adults who are contracting COVID may not be as severe, they can still spread it to others,” Swahn said. “That is one of the big things that we really need to communicate to the population so that people are taking precautions and that the younger people who don't feel as vulnerable, are also taking precautions to protect themselves, but also to protecting the vulnerable populations around them.”

Gov. Kemp lays out how funds from CARES Act will be distributed

Where COVID-19 has increased the most in Georgia - and why

Georgia not suggesting a second shutdown, but DPH warns COVID not done with state