Dr. Audrey Arona, the head of the health district for that area said despite the recent increase, she does not believe it’s what some have feared: a second wave. 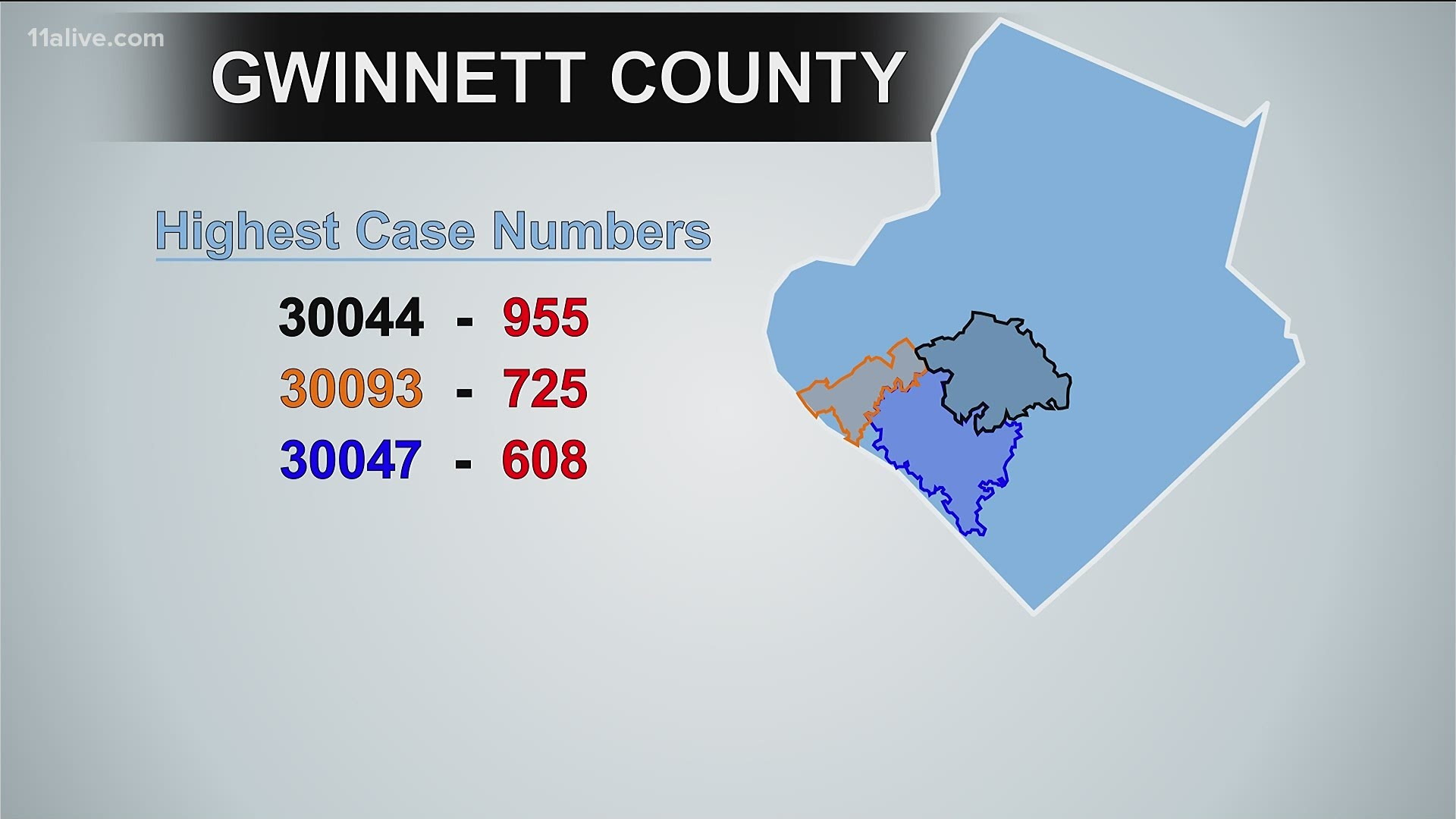 GWINNETT COUNTY, Ga. — The past few weeks, COVID-19 has put Gwinnett County in the spotlight. It now leads in the number of COVID-19 cases with 6,636 as of Tuesday.

Given its population size, the rate of cases remains fairly low compared to the impact this virus is having on many rural areas. Still, 11Alive wanted to know why the numbers were so high.

Dr. Audrey Arona, the head of the health district for that area, said despite the recent increase, she does not believe it’s what some have feared: a second wave.

Instead, she believes it’s a reflection of testing efforts. In this case, our analysis of the data has found, it may not be necessarily how many tests are being given, but testing where it counts.

If you shift the perspective and look at the zip codes with the highest percentage of residents that have tested positive, you get 30093, 30044 and 30071. Here's a look at their case numbers.

All are in densely populated parts of the county, with higher rates of minority residents, especially those of Latino or Hispanic descent. They are also sections with lower income and fewer residents enrolled in a healthcare insurance program.

“There are multi-generational, multi-family units in this particular area and we would expect the numbers to be higher because there’s going to be more transmission,” explained Arona.

The county is launching a public awareness campaign, posting information on buses, in libraries and stores.

According to data provided by the Gwinnett, Newton, Rockdale Health District, the county has conducted about 3,000 tests each week for more than a month.

It wasn’t Gwinnett opened a testing site in Lilburn that the number of positive cases began to noticeably grow. The chart below shows the testing numbers. The orange bars indicate those from the health office and the Lilburn site is indicated in teal.

Credit: Gwinnett, Newton, Rockdale Count Health Departments
Here's a look at testing numbers in Gwinnett for COVID-19. It compares the testing numbers at the health office to the Lilburn site.

The testing site is located at First Baptist Church of Lilburn, 285 Main St NW. According to the county, it is accessible by GC Transit Route 30 at stops 443/444 or 457/477.  When the site is open, it now accounts for more than half of the tests given in the county by the public health department.

Arona said you can’t really compare the numbers from March and April, with what’s happening in June. Especially since now, anyone can get tested.  If you look at the data, even with more cases, the hospitalization and death rates have gone down. The median age of those sick has decreased, as has the percentage of those with known underlying medical conditions. Below is a breakdown of those numbers.

RELATED: Where COVID-19 has increased the most in Georgia - and why

“So all that implies that the cases that we are finding are younger, they have less severe disease and they have less medical problems. Which is all good.”

Arona said the county has capacity to test about 5,000 people a week, but right now only about half that are requesting appointments. Testing is free and available six days a week. Visit their website to schedule an appointment or call 770-513-5631

RELATED: Gwinnett COVID-19 cases are rising. But why?

Is it safe to form a COVID-19 'support bubble' with friends?