With COVID-19 cases increasing – there’s concern hospitals will once again be overwhelmed. Here's what the data says about capacity. 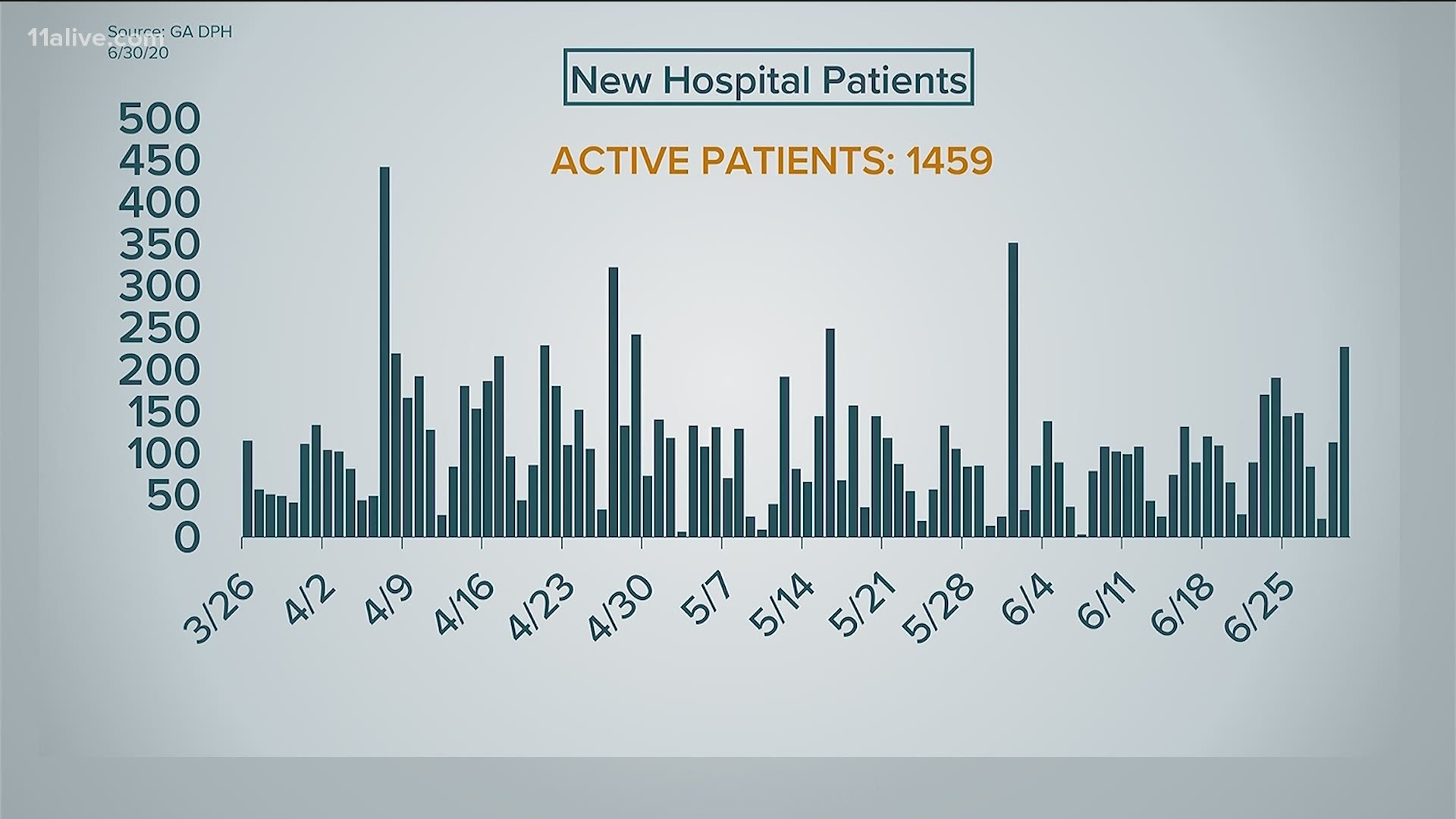 ATLANTA — On Tuesday, the Department of Public Health reported 1,874 new COVID-19 cases. While a smaller number in recent days, the jump in new hospital patients, 227, is just as important. It's the largest jump since June 1.

In April, just days after the Gov. Brian Kemp ordered everyone to shelter in place to help flatten the curve, Georgia Emergency Management (GEMA) started giving daily data snapshots of how cases were impacting capacity at hospitals.

Most hospitals don’t report how many COVID patients are in their care, so the public has to rely on regional reports from the state. GEMA lists how many people are in the hospital by the type of beds available in emergency rooms, critical care and general use. The patient counts don't break out those receiving treatment for COVID versus other illnesses, but it does give perspective on the strain new cases might create.

GEMA reports the total number of active patients - those whose illnesses are so severe they need medical treatment - at 1,459. That number has steadily been rising for more than two weeks, and the below graph shows the number of new patients hospitalized each day.

Right now, Georgia hospitals are still allowing elective procedures and encouraging those with chronic conditions to come in for care.

Most metro Atlanta counties fall into Region D, which includes Gwinnett, Fulton, Clayton, Forsyth, Fayette, Rockdale, Newton and DeKalb counties. The region now has slightly less bed capacity than the past few months, which makes sense since mobile hospitals like the one at the Georgia World Congress Center have been shut down.

The graphic below shows the number of emergency room patients and critical care patients for the region over the last three months.

On June 29, GEMA reported more people in the emergency room - 519 according to state data -  than the same date in April or May. But, with a total of 1,007 beds dedicated to ER visits in the district, that’s still only about 50 percent of capacity.

Region N, which covers Cobb, Douglas, Cherokee and Paulding counties, actually have a few more beds ready for patients. And that’s good news, because on June 29, the district had 132 people in the ER getting treatment, almost twice as many as the same day in April when the district had 76, as shown in the graphic below.

When it comes to critical care beds, the district reports being at 85 percent capacity. Even 81 percent of the beds in the general population are currently being used.

Dr. Danny Branstetter, Wellstar Health System Medical Director of Infection Prevention admitted those numbers sound concerning, but says the hospital normally operates at those levels, if not higher. The difference is hospitals tend to have a steady flow of patients, so capacity doesn't change much up or down. COVID-19 has the threat of creating an abnormal surge.

Branstetter said hospitals can shift equipment and staff around to turn ER beds into places for more critical care patients.

Branstetter added that GEMA's numbers don't account for surge capacity plans designed in the first wave of COVID cases. The reduction of cases in May allowed hospitals time to restock supplies of personal protective gear, or PPE, and establish new supply chains if things continue to get worse.

Atlanta mayor: 'I am a realist, not an alarmist' as COVID-19 numbers rise at 'alarming number'

Fauci said US could reach 100,000 new coronavirus cases a day