Texas vs. Georgia: Here's how the states' COVID responses compare

11Alive's Numbers Team wanted to compare the two states in terms of where the pandemic stands and the response. 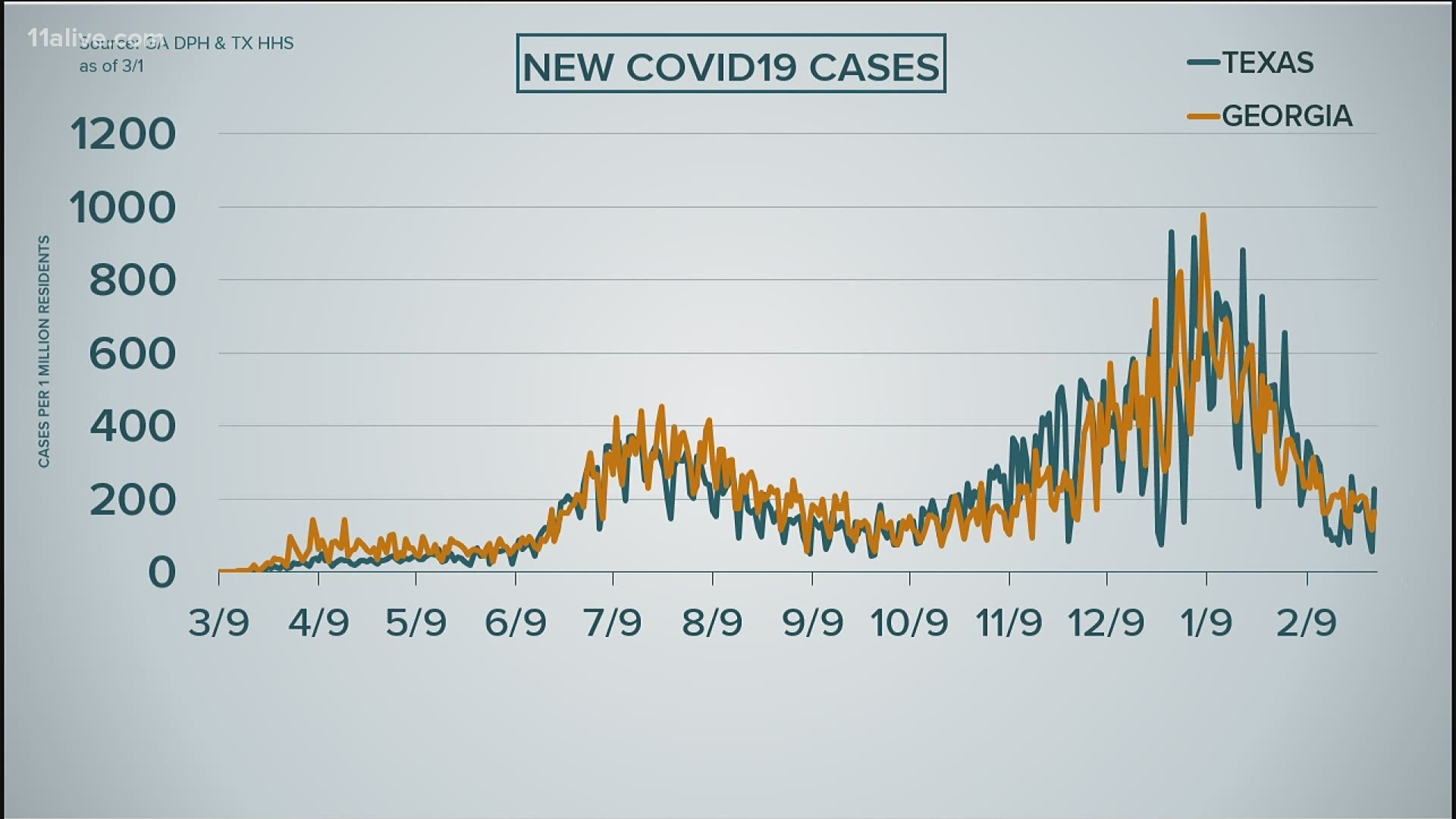 ATLANTA — Texas' governor on Tuesday announced he will be lifting his state's mask mandate and allow businesses to reopen 100% by next Wednesday.

During a Wednesday news conference, Gov. Brian Kemp was asked about the changes in Texas, so 11Alive's Numbers Team wanted to compare the two states in terms of where the pandemic stands and the response.

Texas' mask mandate began last July, and some businesses had to close or limit capacity starting in June. But business restrictions have been loosened over time.

Meanwhile, here in Georgia, we have never had a mask mandate, and businesses - for the most part - have been open since last May.

So, how does the pandemic look in Texas as restrictions are lifted? And in Georgia, where few restrictions have been in place over the past 10 months?

While each state's guidelines have been very different, the two have been on the same roller coaster ride during the pandemic.

Texas has clearly had more deaths and hospitalizations, as shown in the graphs below, but that's because Texas' population is also nearly three times Georgia's.

But, when we factor for that population difference, the trajectory of new COVID-19 cases is almost identical.

On Wednesday, the White House COVID response team acknowledged that cases were declining as vaccinations are being administered, but advocated against the decision of Texas' governor to lift restrictions.

"Health officials as you know, in every state feel now is the wrong time to lift the mask mandate," said Andy Slavitt with the White House.

"With Texas, they're very high as far as the state rankings go for everything - for case rate, death rate, test positivity rate," she explained. "So, it is especially worrisome to see Texas doing this."

When it comes to unemployment, Georgia and Texas began the pandemic with similar unemployment rates.

Both hit peaks in April, but Georgia - with its open businesses - has recovered quicker than Texas.

Gov. Kemp, on CNBC Wednesday morning, said his approach to restrictions kept Georgia's economy running and as strong as possible during the pandemic.

"We didn't have any new cuts, we didn't have furloughs, we aren't laying anybody off," he listed. "We put over $500 million back into public education, we are funding public health."

Mandated or not, though, whether you are in Texas, Georgia or elsewhere, medical experts say masks, social distancing and other health precautions are still needed.

"We have not finished the race here," Schmidtke said.