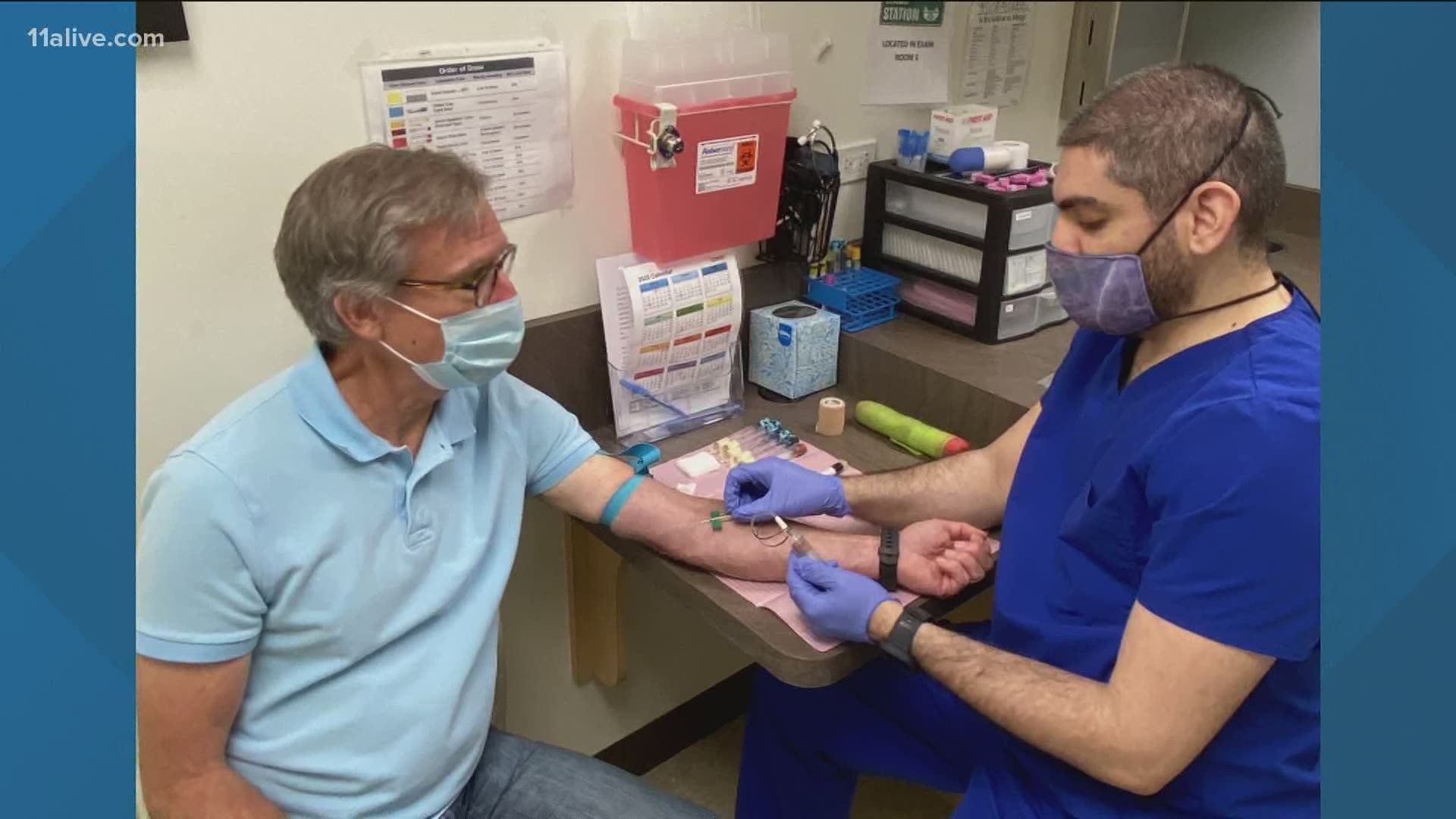 ATLANTA — Researchers are pushing science to the limits in the race to find a viable vaccine for the coronavirus, and one man in Atlanta is volunteering to be part of the search for a solution.

Hulme said he believes it's one way that he can help fight the virus.

It's not the first time he's lent his body to research during a public health crisis. He participated in a study for an anthrax vaccine after the Sept. 11 terrorist attacks. He said it was an honor to help then, as it is to help Emory University today.

"It truly is an honor to participate in something with people who are doing amazing work on the front line," he told 11Alive.

Humes shared photos of himself receiving the first dose of the trial vaccine. Phase one of the study began on March 16, with the trial lasting approximately 14 months.

"It literally was like getting a flu shot where you roll up your sleeves and there you go," he said of his experience receiving the vaccine.

Credit: Norman Hulme
Norman Hulme volunteered to be a human tester for a trial vaccine being developed by Emory University and drug company Moderna.

He will have to go back to the doctor several times, including to receive part two of the vaccine and to have blood work done.

Unlike some traditional vaccines that give patients a small dose of the virus or disease its trying to fight, Moderna is attempting to genetically modify the virus itself, by instructing cells to make the proteins associated with the coronavirus - without making someone sick. The hope is that the immune system will then kick-in to create the antibodies to fight off COVID-19.

Moderna says all 45 patients who have taken the experimental vaccine are safe. Eight have developed antibodies.

"We hope if everything goes to plan, that we could have a vaccine by early next year or even by the end of this year," Dr. Stephen Hoge, president of Moderna told NBC News previously.

Some health experts urged caution, though, saying they want to see more patient data and detailed findings than Moderna has offered.

According to the World Health Organization, there are more than 70 vaccines in the works or currently being tested. Some are taking the more traditional development route, which need an egg-based solution in which the vaccine is grown inside a petri dish. Those developments typically call for a longer incubation period, something that Moderna said isn't necessary for its vaccine, one reason the drug maker said it could make it to market faster than usual.

The experimental vaccine is now being tested in larger studies, with the next phase starting in July.