Cruise ship passengers in quarantine at Dobbins: ‘Nobody’s been tested’ for coronavirus

“We thought when we get to Dobbins, we will be tested. As of today, nobody’s been tested.” 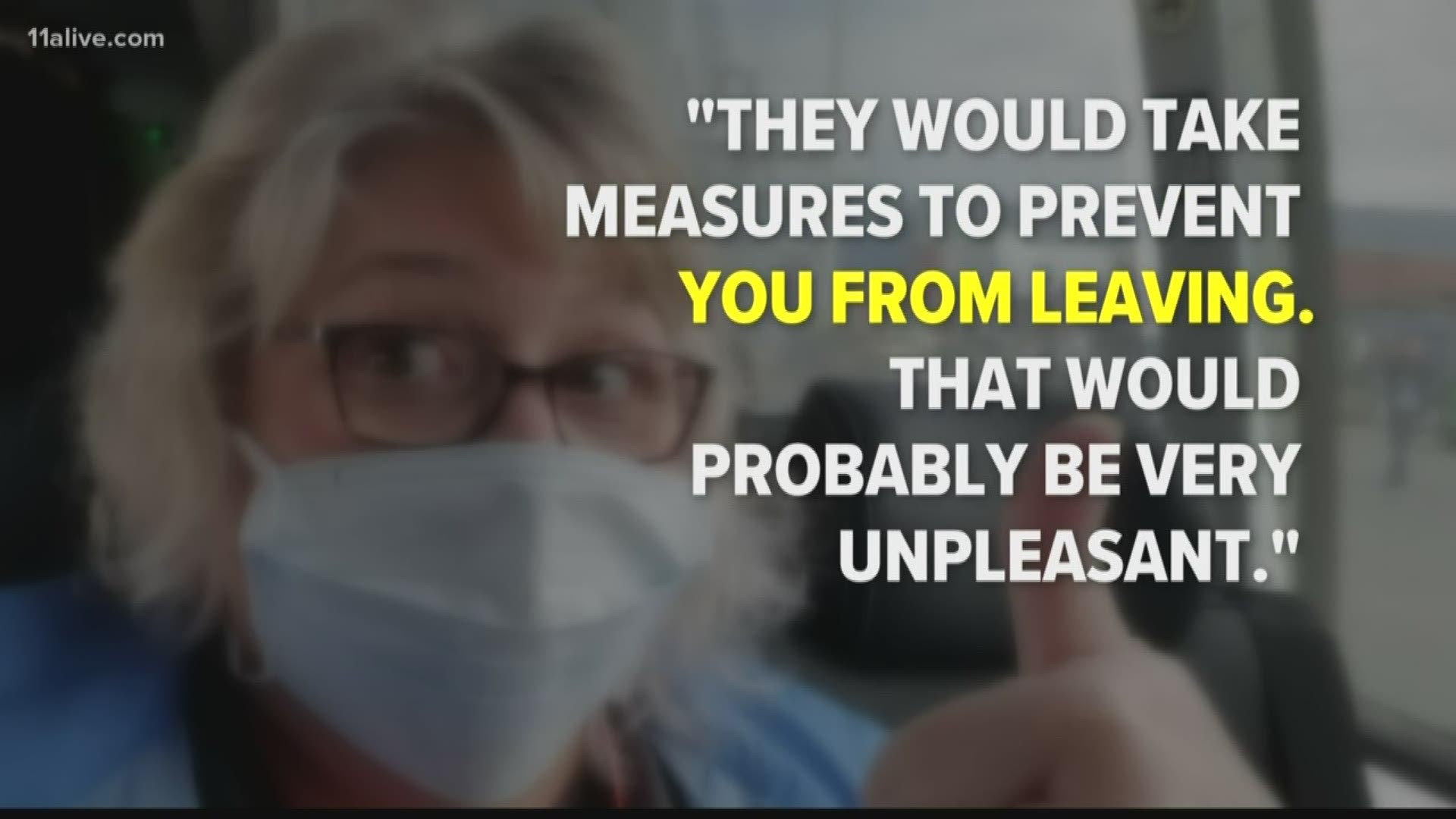 MARIETTA, Ga. — A Georgia woman's return home from a cruise possibly affected by the coronavirus has turned into a waiting game, as she and others who disembarked from the ship await clearance to return to their lives.

More than 250 Grand Princess cruise ship passengers arrived at Dobbins Air Reserve Base in Marietta, Georgia Wednesday and Thursday. Among them were 30 Georgians, including Teresa Duncan Johnson.

“We’ve been through quite a bit in the last week and a lot of uncertainty,” Johnson explained to 11Alive's Hope Ford.

More than 3,000 people were kept on-board the ship, which was not permitted to dock in California after 21 people tested positive for the virus.

Passengers spent over a week on the ship in quarantine before the cruise finally docked, and its passengers were sent to various military bases for additional quarantine.

Johnson and several of the other passengers began a 14-day quarantine at the Marietta area military facility, as they may have been exposed to the novel coronavirus, called COVID-19, while they were aboard the cruise ship.

Johnson described the base as three, two-story buildings that feel hotel-like. Each room has a bath or shared bath, with families and couple staying in the latter. The grounds are surrounded by both permanent and temporary fencing, with outside picnic tables. People can move around outside, as long as they’re wearing masks.

Photos: Inside the quarantine at Dobbins Air Reserve Base

But, Johnson said, social distancing, the idea of keeping at least six feet away from others, isn’t be strictly enforced.

“They put us on buses and that’s all we had. We were out face masks and we were sitting two to a seat,” Johnson said of the transport to Dobbins.

“Then, they put us on a plane where we were three to a seat and six across,” she described. "They weren’t really concerned about our six feet of social space at that point."

During the first two days at Dobbins, Johnson said people started raising concerns. A meeting between the passengers and officials from the Department of Health and Human Services became heated on Thursday morning, according to Johnson.

One of the biggest concerns is the apparent lack of testing for the coronavirus.

“We were told that we would be tested before we got off the ship,” Johnson said, but added that that didn’t happen.

“We thought when we get to Dobbins, we will be tested," she said. "As of today (Thursday), nobody’s been tested.”

Complicating matters, Johnson added that her husband is running low on insulin and she doesn't know yet how to get him more medicine. She said she was told if he runs out and his sugar drops or elevates, he would be taken to a hospital. Johnson said a worker told her that they are trying to work with pharmacies to get medicine, but don’t know much more than that.

Houston County resident, Jane Wilson is also at Dobbins. She told 11Alive's partner station WMAZ in Macon, they have yet to be tested for coronavirus.

Outside of testing, Johnson said several people are upset about being forced to stay at the base, whether they have the virus or not.

A spokesperson with HHS said no one would be forced to take the test. However, if they refuse, they would have to remain at Dobbins for the full 14-day quarantine.

Meanwhile, Johnson said they were told, “They would take measures to prevent you from leaving. That would probably be very unpleasant, I imagine.”

While Johnson is fine with the idea of staying the full 14 days, she said others feel like they’re being treated like criminals.

“Why are we not allowed to go home then, and self-quarantine?” Johnson said, relaying the thoughts of other passengers.

Wilson agreed, saying they feel like they’ve done something wrong.

"I'm looking out the window right now at fences that have been put around us so we can't go out of this area. We can go outside if we wear our masks, but we're not allowed out of this fenced-in area," Wilson told WMAZ. "Now we're prisoners at Dobbins."

11Alive reached out to the CDC and HHS to see when testing would take place for passengers. We will update this story if we get a response.

Update: Johnson said she has been told testing will being either Friday or Saturday.