He first beat cancer, then COVID-19. Atlanta man returns home to celebration after 120 days in hospital

Carl Dudley is a fighter. The cancer survivor with one kidney was diagnosed with COVID-19 in March. On Tuesday Dudley returned home, defying the odds once again. 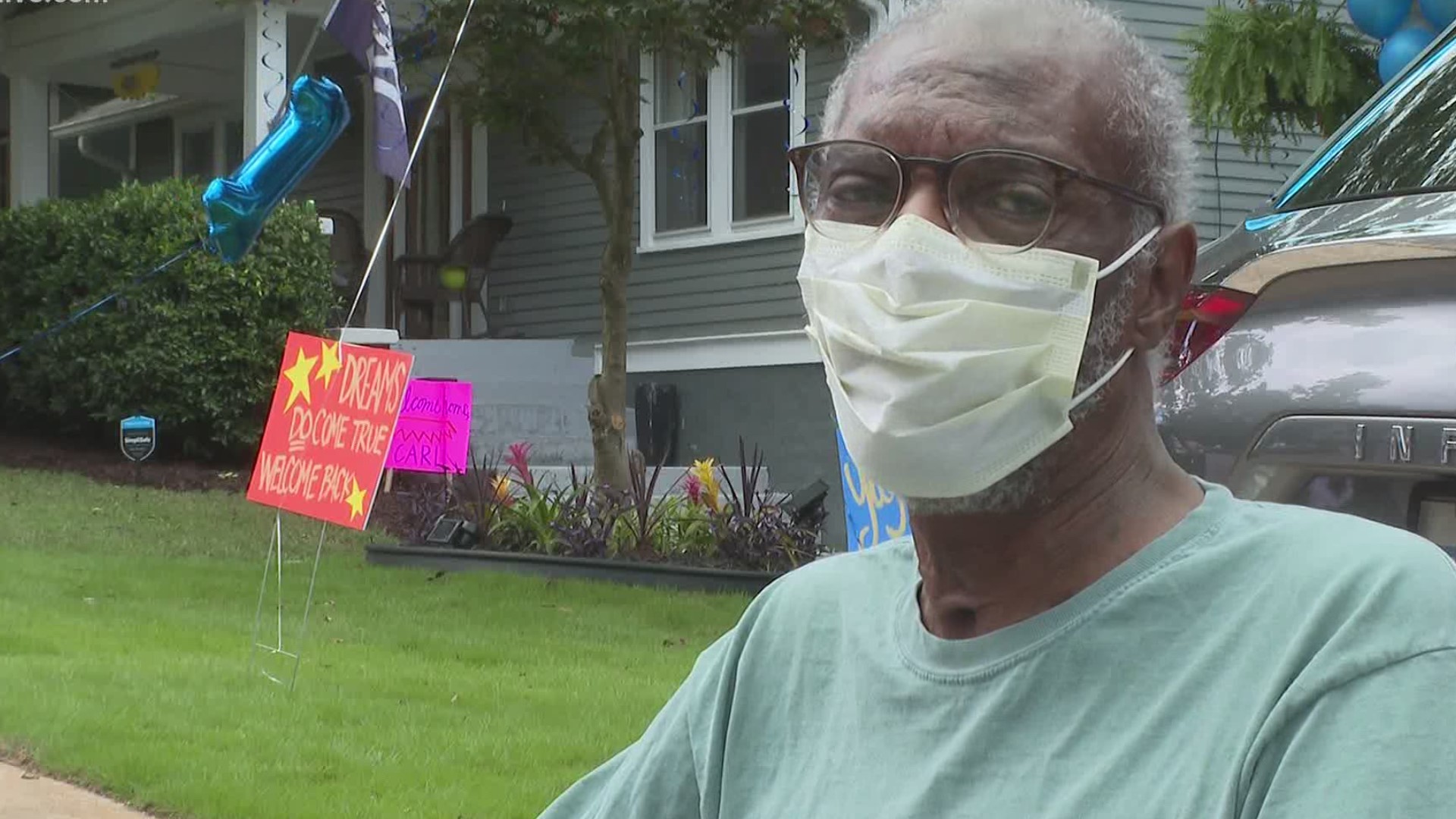 ATLANTA — It is a moment 66-year-old Carl Dudley's family, friends and neighbors didn't take for granted.

Over the past 120 days, it is a moment they doubted the would ever see as Dudley was in the hospital battling COVID-19 and he was put on life support multiple times.

But on Tuesday, Dudley was released from the hospital and sitting in the passenger seat of an SUV driven by his son Troy, returning to his Grant Park neighborhood home.

"This is overwhelming," Dudley said when he arrived home. "I've been fighting back tears because everybody is here."

People lined Dudley's street with signs and balloons and cheered him on as he returned home. Family from around Atlanta and from as far as Denver and Chicago showed up.

His home was decorated with flowers, balloons and banners reading "Welcome Home!"

His son helped him into a wheelchair and while socially distancing he waved and said thank you to everyone.

"What I hate is this social distancing thing because I would love to hug everybody. I know they prayed for me and their prayers were answered."

He previously survived cancer and only has one kidney. With his previous health issues and age, Dudley said he did everything he could to avoid the virus.

In late March, though, he tested positive.

"I was afraid. I found out I was positive and just stayed in the house," he said.

Over the next week, Dudley began struggling to breathe and those closest to him began noticing his health declining.

From that point on, Dudley said the past four months are a blur. He vaguely remembers one of his sisters calling 9-1-1 and an ambulance taking him to Grady Hospital.

He was admitted with COVID-19 and pneumonia.

Dudley remembers very little from his time in the hospital.

"He's the biggest fighter I know. It is a miracle," Carl's son Troy Dudley said.

Over the next four months, the family would receive regular updates from doctors, even though restrictions on visitors stopped them from being by his bedside.

They would video chat with Dudley when he was alert enough to talk with them.

"We were pretty much told we wouldn't have this day but yeah, it turned around," his niece Felicia Perry said.

Carl would be put on life support three times before he began fighting back.

"They were telling us we needed to make a decision whether to pull the plug of keep him on life support and the day after our visit he started coming back," Troy said.

He eventually would be transferred from Grady to Emory Healthcare's rehabilitation center. Last week he found out he would be returning home, where he will now continue his rehab. Currently, Dudley is unable to walk without a walker.

"My body is weak all over," he said. "My left arm doesn't work at all and I'm going to need to just practice to get back to normal."

Now back home, he hopes his story can be an inspiration for other patients and families battling COVID-19, and he wants his fight to show those still doubting the virus the damage it can cause.

"COVID is very real and it can do some serious damage to your body. Listen to the health people telling you what is good and what you need to do to protect yourself."