Friday's report of nearly 9,000 new cases caps weeks of record-high jumps with 8,942 being the highest ever. 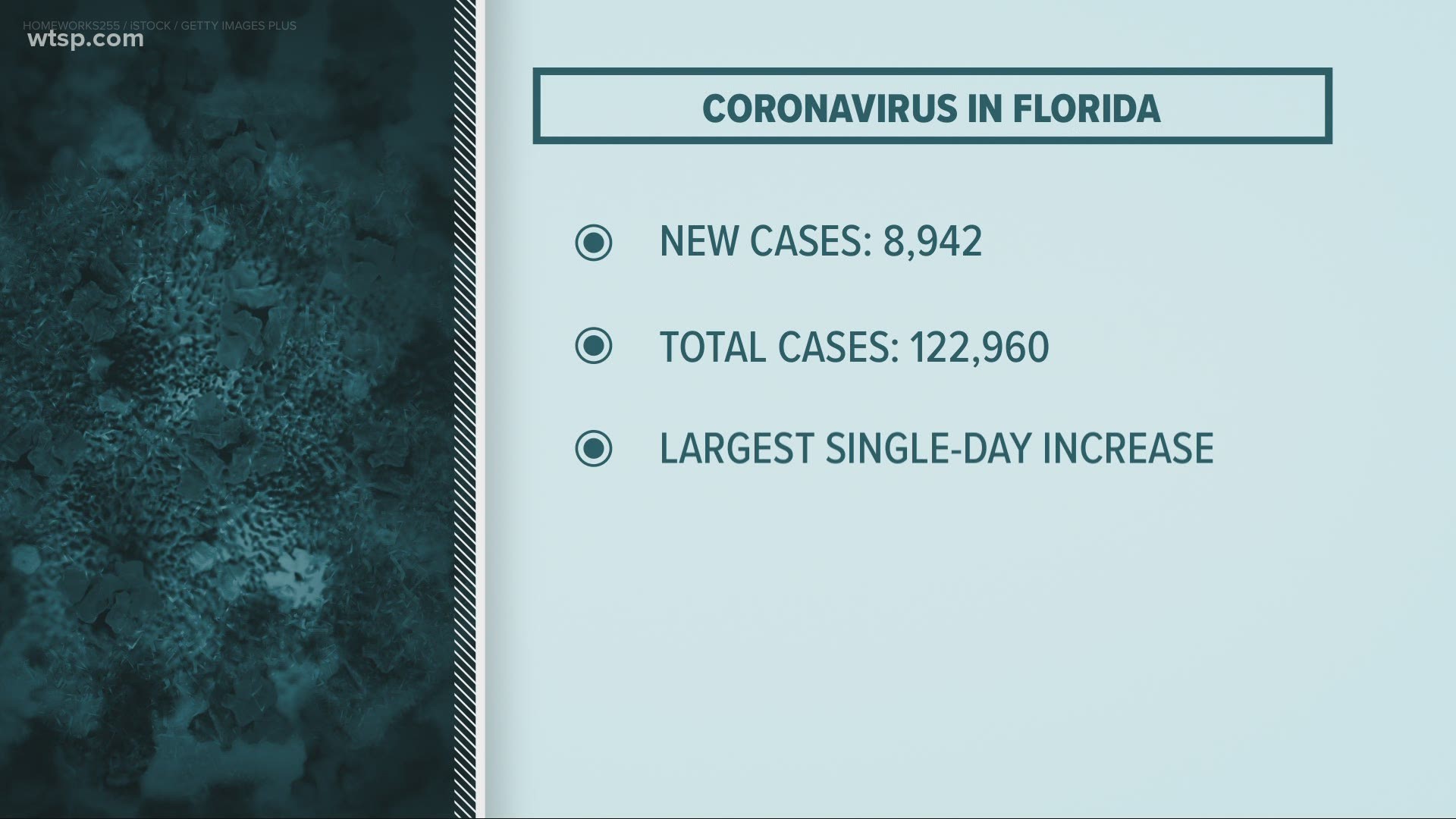 The state of Florida has reported record high spikes in the number of new COVID-19 cases for the last couple of weeks, and on Friday it added another 8,942 cases.

That number is now the highest single-day jump in new coronavirus cases in Florida since tracking began in March, eclipsing Wednesday's previous record of 5,508 new cases, according to data from the Department of Health.

Friday was the first time new cases topped 8,000, and was the third day in a row new case reports were more than 5,000.

Here's a breakdown of the new coronavirus cases reported by the state on each day for the past week:

While the number of new cases each day continues to rise, all eyes are also on the percent positivity rate and the number of people being tested each day. As of Friday morning, that rate for new cases is 13.05 percent, an increase from Thursday's 8.72 percent.

Thursday marked the most test results the state had done in one day with 71,433.

RELATED: As Florida hits a record number of new COVID-19 cases, epidemiologists warn the next 2 weeks could be alarming

Gov. Ron DeSantis and other state and federal leaders continue to point to increased testing as the cause for the rise in new cases each day. As of Friday, more than 1.7 million people in the state have been tested.

On Thursday afternoon, DeSantis held a news conference at a Tampa high school and took questions from reporters regarding the state's response to COVID-19. The governor said the state needs to reduce the percent positivity rate, but also reiterated his comments about testing causing the jumps in cases.

"Some of what you're seeing...is mass testing regardless of symptoms," DeSantis said Thursday.

In response to a question about Texas pausing its reopening plan, DeSantis said "We are where we are. I didn't say we were going to the next phase."

Florida is currently in Phase Two of reopening, which began on June 5.

The new numbers in Florida came as the United States hit an all-time high of 40,000 new cases in a single day. The previous record was set in April with 36,400 in a day.

While the jump is believed to reflect, in part, expanded testing, many medical experts say there is substantial evidence the coronavirus is making a comeback. Experts point to rising deaths and hospitalizations in parts of the county, especially in the South and West, including Florida, Texas and Arizona.