Early in the pandemic, the hero signs went up at hospitals. But as COVID has clung to our community, frontline workers say they're feeling the fatigue. 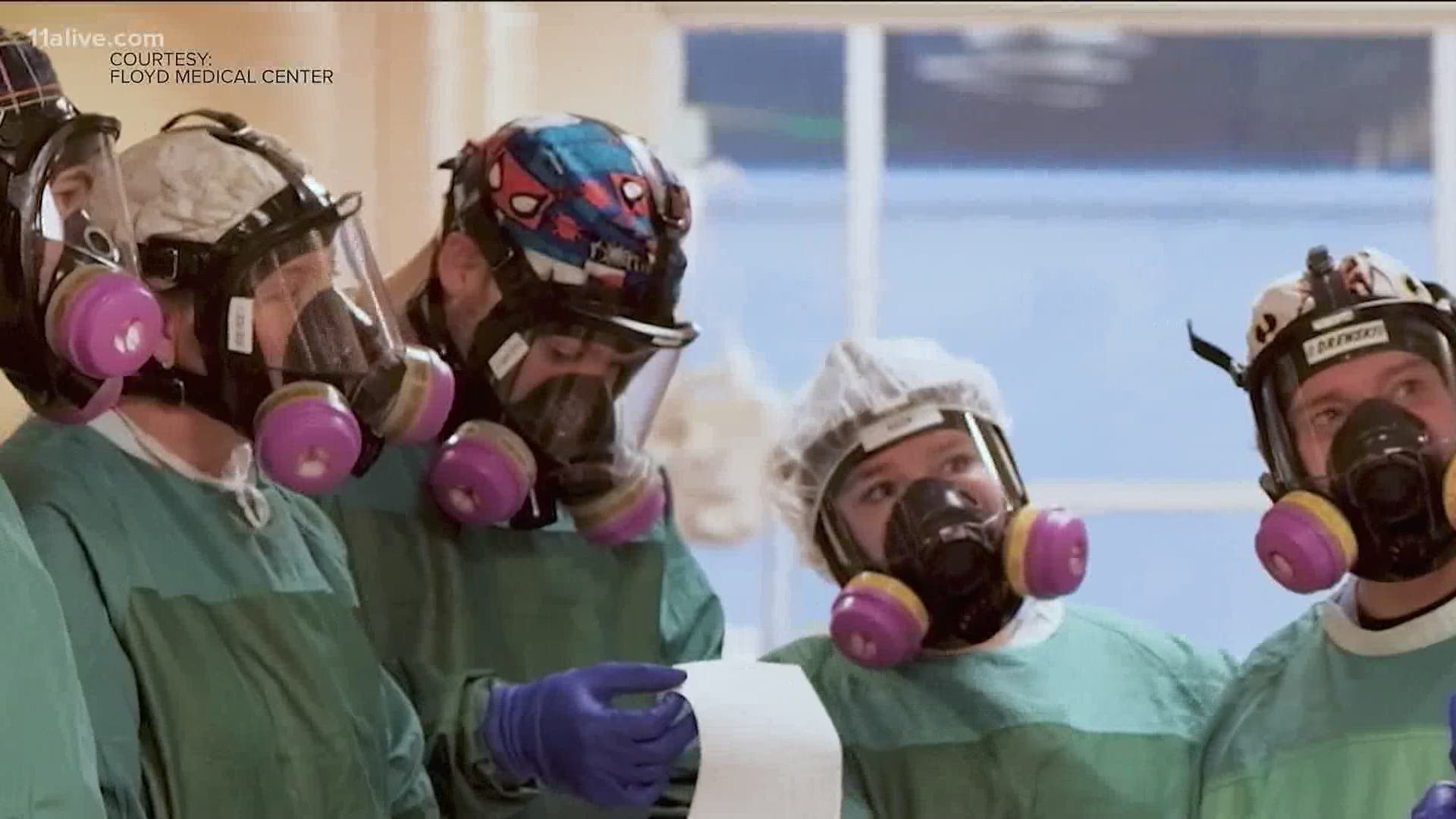 FLOYD COUNTY, Ga. — More than 70 hospitals and nursing homes have asked for help with staffing. Georgia responded, spending more than $53 million by mid-July.

Dr. Jennifer Barbieri, a pulmonary critical care doctor in Floyd County agreed to sit down and talk with 11Alive about the toll this pandemic has had on our healthcare workers.

Barbieri said she feels called to the profession, but admits COVID has added a heavier emotional burden to her caseload. She has held the phone as families have had to say goodbye before a loved one is intubated, or even died.

“In my field and the patients I'm seeing, they're the sickest of the sick. Death can sometimes be overwhelming," said Barbieri.

RELATED: Families who lost loved ones to COVID-19 share what they miss most

But frontline workers continue to fight, with seemingly no end in sight.

Barbieri said that, on those days, she’s amazed at how often an encouraging text message from a co-worker or an unexpected note seems to appear.

She recently received a box of cards from members of a church in Peachtree City. They were strangers who just wanted to show their love and support.

“It’s those kind of gestures that get you through the harder days. Last week was a really hard week,” said Barbieri. “It feels like God’s sort of, showing me a rainbow when sometimes things feel really dark and gloomy.”

Other notes come from her daughter. Barbieri shared a few. The theme in each: Mommy’s tired.

The Georgia mom said she's grateful to her husband who has had to help fill the gap when her patient load demands more of her time.

“We are definitely a good team,” she said.

Still, she knows being away so much in a time of uncertainty for everyone has had an impact on her children.

Barbieri came to the interview with a big green bag which holds the mask she wears inside each COVID patient’s room. It’s more involved than an N95 and actually looks more like a gas mask. It’s designed so the filters can be replaced and has several layers that seal against her face when the straps around her head are pulled tight.

Barbieri said she’s never had to wear anything like it to treat her patients.

“I take my white coat off and my head is covered with a bonnet and my face is covered with this,” she said holding up the mask. “But I try to compensate that by making eye contact and touching the patient and letting them know who I am. It's - it's hard to talk in one of these. So, I’ve found my voice getting hoarse.”

One reason Barbieri agreed to sit down and talk candidly is that we promised – no politics. To her, there is nothing political about wearing a mask.

“I encourage everybody to wear masks. You know, if - if you can do something to protect somebody else, it's a small gesture. I see it as a gesture of kindness for your neighbor," Barbieri said.

RELATED: Why is there a national shortage of school nurses?

Barbieri, along with four other doctors in her practice, makes rounds at Floyd Medical Center and Redmond Regional Medical Center.

According to hospital reports, the two hospitals have treated more than 3,500 patients that are either COVID positive or suspected of having COVID. While the numbers are slowly starting to go down, Barbieri said it doesn’t feel that way yet to her.

“Last week I had the gentleman that had to have a tough conversation with about going on the ventilator. He asked me to pray with him before - before we put him on the ventilator and he passed away a couple of days ago,” Barbieri said, unable to hide her emotions. “So, knowing that that was the last words he heard, it makes me thankful that I got to be a part of that.”

“I hope that this doesn’t continue for much longer because it is, I don't think it is sustainable. I think there's going to be a high degree of burnout for physicians and in health care workers," Barbieri said.

The doctor said she worries about compassion fatigue. She said it helps to remember the victories.

“We had a 83-year-old gentleman, after being in the hospital for six weeks, survived to leave the hospital," she said. "And one of the nice things for me that day was to be able to get to see his family for the first time face-to-face and to put a name with the face of people that I've been talking to.”

Barbieri said many of the patients who come through the door have pre-existing conditions, but they’re not chronically ill. They are relatively healthy people managing their high blood pressure or diabetes. If not for COVID, they wouldn’t be in the hospital. They certainly wouldn’t have died.