Georgia and North Carolina | How neighbors compare on COVID-19

We're digging into the numbers. 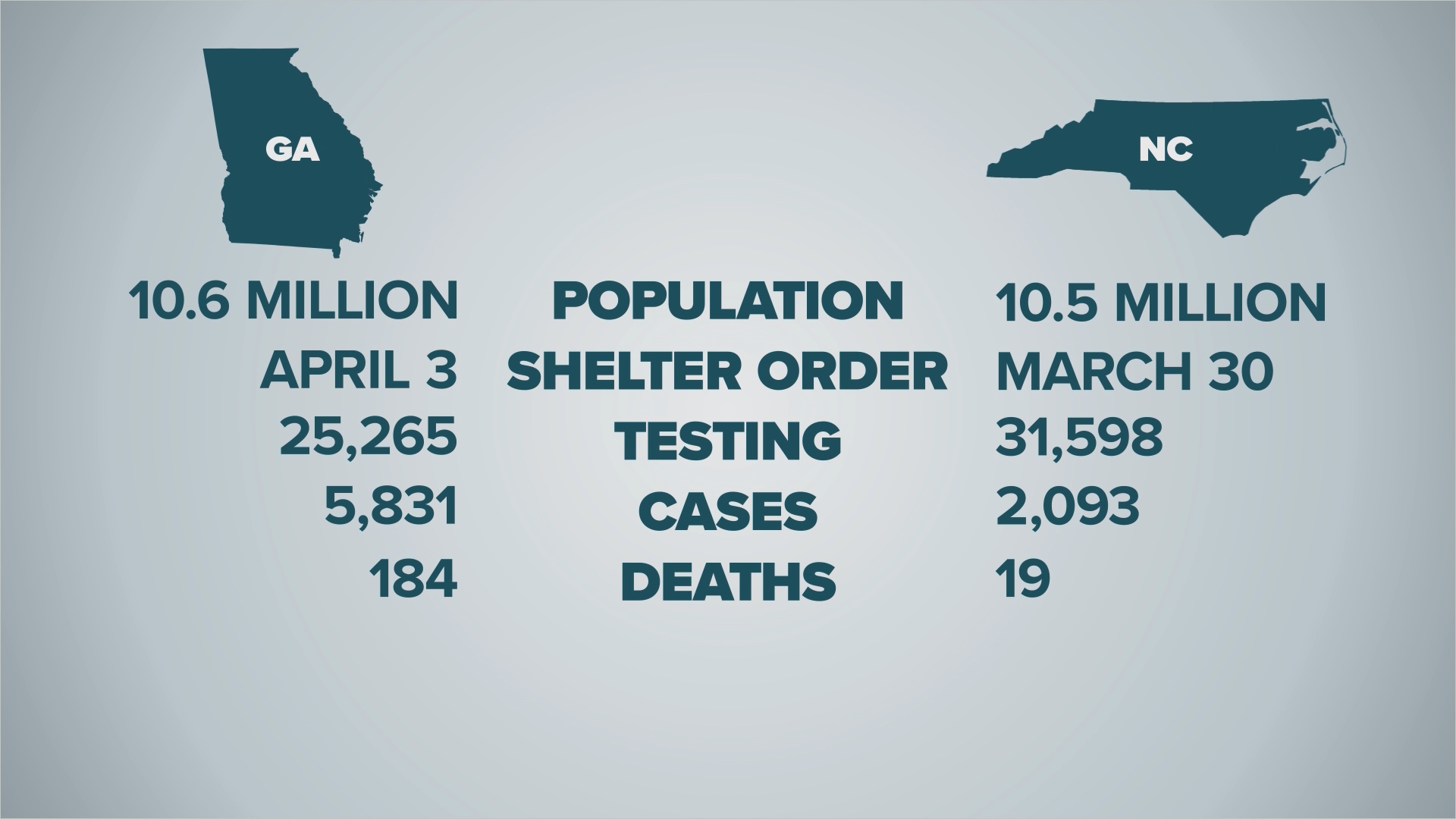 ATLANTA — COVID-19 has changed our daily lives. We’re constantly trying to figure out what stores are open, how to get a dentist appointment, and when to wear a mask.

It’s easy to forget, the rest of the country is dealing with this too. So, we wanted to look at how Georgia compares to other states.

Investigator Rebecca Lindstrom starts with one of our neighbors, North Carolina.

It's interesting how each state does things differently. While Georgia started to get back to business on April 24, North Carolina only started reopening its economy last week.

And of almost all of the things we opened first - like nail salons and hairdressers, North Carolina has those decided can wait.

Georgia and North Carolina have similar populations – roughly 10 and a half million.

They closed at similar times - Georgia ordered everyone to shelter in place on April 3, four days after North Carolina.

On that day, North Carolina was ahead of Georgia on testing, but had fewer COVID-19 cases: 2,093. At that point, Georgia had double the number of cases.

Fast forward to this past Thursday: North Carolina reported more than 16,000 laboratory-confirmed cases - still half of Georgia’s total.

But Georgia has picked up the pace on testing, especially in the past two weeks, averaging 8,394 tests per day.

Both states want to flatten the curve to avoid overwhelming their hospitals.

Because Georgia didn’t start tracking how many people were actually in the hospital each day until May, we only have the past two weeks to compare.

In that time, North Carolina has consistently had about a third of the number of patients as Georgia.

Their highest day of hospitalization throughout the pandemic was April 29, when they reported 551 patients. The good news for Georgia is that our number is trending downward, despite removing the shelter-in-place order for all but the elderly and medically fragile.

That's true for both new patients and new cases.

So why has Georgia been harder hit? We’re still working on that answer.

But a big reason is likely when COVID-19 entered our community. Georgia and North Carolina announced their first positive cases within a day of each other in early March - but Georgia has since tracked positive cases in our state as far back as Feb. 1.

That means COVID-19 spread undetected in Georgia for more than a month.