Erik Santos was has been charged with one count each of conspiring to violate the anti-kickback statue and conspiring to commit health care fraud. 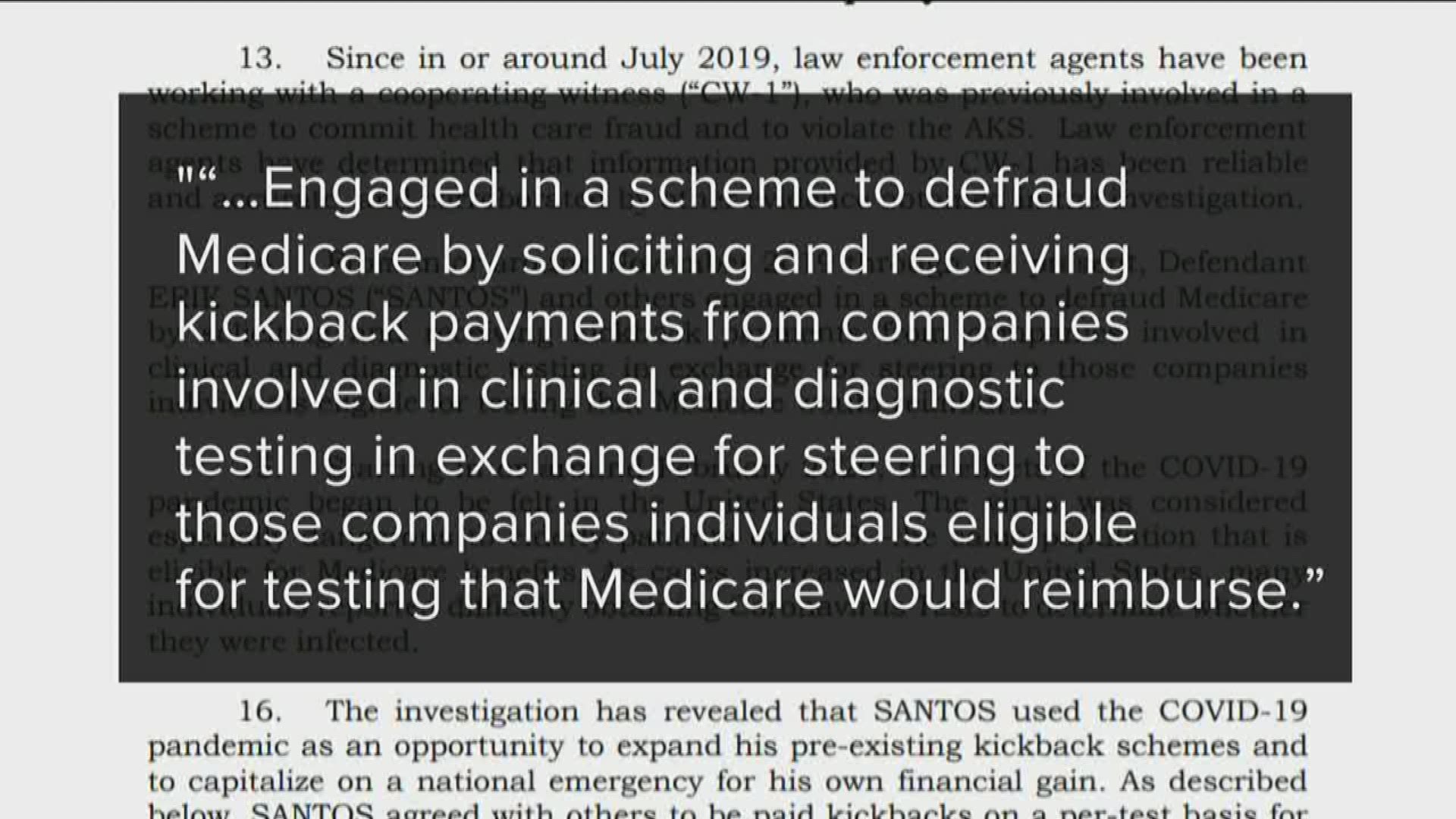 Erik Santos was arrested at his home in Gwinnett County and charged with one count each of conspiring to violate the anti-kickback statute and conspiring to commit health care fraud.

According to the US District Attorney's Office of New Jersey, Santos allegedly got kickbacks from medically unnecessary testing, including testing for the COVID-19 coronavirus, which is already scarce in the United States.

"The complaint, in this case, describes a defendant who saw the spread of COVID-19 as nothing more than an opportunity to profit personally; thus preying on people's fear in order to defraud the government and make money for himself,” U.S. Attorney Carpenito said.

According to the federal investigators, the alleged scheme ran all the way back to November 2019 and was originally set up to defraud Medicare, with the goal of defrauding the federal program out of more than $1 million.

Officials said Santos ran a marketing company that would help send people to certain testing companies. He, and others, received kickback payments from the companies involved in the testing, the cost of which was being reimbursed by Medicare, prosecutors said.

Santos, prosecutors said, would be paid on a per-test basis for submitting genetic cancer screening tests, regardless of medical necessity.

But, in February 2020, when the effects of the global coronavirus pandemic started to be felt widely in the United States, prosecutors said Santos expanded his alleged scheme to include testing for COVID-19, which has been affecting, at a much higher rate, the same vulnerable populations likely to receive Medicare.

One special agent for the FBI office in Newark likened Santos' profits to receiving "blood money."

"Santos sought to maximize his kickback profits and to bleed federal health care resources at a time when Medicare beneficiaries across the United States were in dire need of coverage for medical treatment and services," the US district attorney's office added.

Santos now faces a maximum total of 15 years in federal prison. Both offenses are also punishable by a fine of $250,000.

He is set to appear in front of a federal judge in Atlanta on Monday.

If you think you are a victim of a scam or attempted fraud involving COVID-19, you can report it at the US Justice Department's website.

News for the Coronavirus in Georgia

Coronavirus in Georgia: Confirmed cases up to 2,809 with 87 deaths

'This is what COVID-19 put me through': 11Alive investigator gives personal experience after testing positive