Monday marked the first day Georgia restaurants could open their dining rooms after being forced to close on April 3. 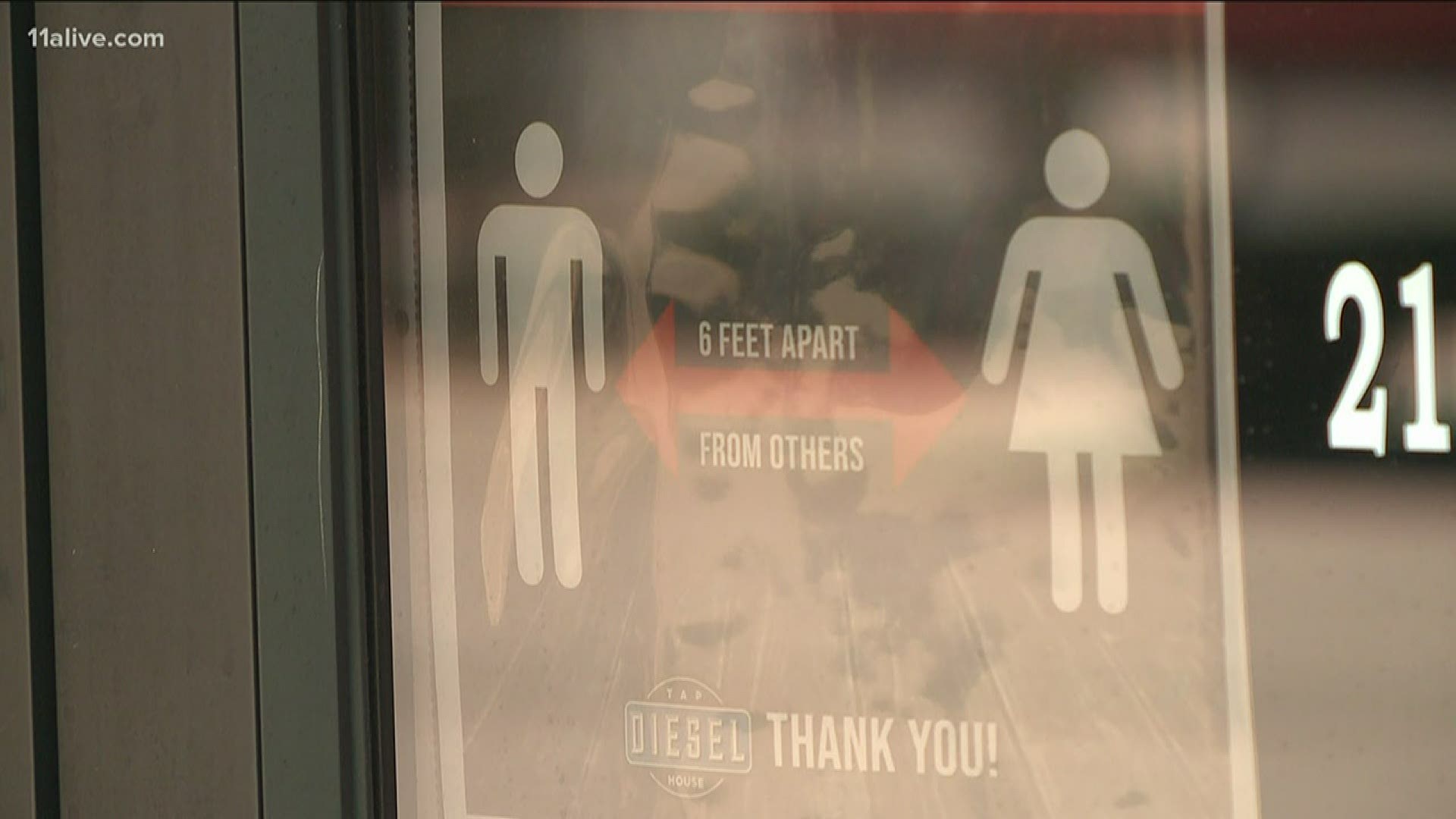 ATLANTA — In Buford, Diesel Tap House opened its doors for the first time in January.

Owner Alecia Flahiff couldn't have ever imagined only months later a pandemic would cause her to close her restaurant's dining room.

She closed her dining room on April 3, after Georgia Gov. Brian Kemp announced the state's shelter in place order. Part of the order directed restaurants to close their dining rooms.

"We felt we were ready for it, by doing the carryout and delivery and everything that we've been doing," she said. "We've been maintaining the sanitizing. We've had that as a priority since this started."

A few customers stopped to eat around 11 a.m., right as Diesel opened for the day, but Flahiff said for the rest of the day she didn't know what to expect. She prepared though, with the staff on hand to handle a lunch rush.

"We talked with all the employees and obviously we've given them the option -- do you want to come in, do you not," she said. "We totally understand. It is there call. Everyone was really gung-ho."

Workers at Diesel Tap House are now following a list of guidelines and requirements put in place by the state for restaurants to re-open their dining rooms.

Changes include blocking many tables to keep parties at least six feet apart. Staff is also wearing masks, disinfecting the restaurant often throughout the day and health safety directions are posted around the restaurant.

Flahiff said if customers are feeling ill or have COVID-19 symptoms, they're directed to head home.

With table closures, Flahiff said the maximum capacity of her dining room is being slashed by 75 percent.

Next door, Over the Top Burger Bar's dining room, remained closed on Monday.

Owner Travis Binns said he opened his restaurant in mid-March. As a new business owner, he was focused on making sure his restaurant had a smooth opening and then COVID-19 hit Georgia.

For now, he's offering a shorter to-go only menu. He said his dining room remaining closed is day-to-day as he will continue to monitor the pandemic and plans to open the dining room when he feels it is safe for everyone involved.

Many other restaurants 11Alive stopped by or contacted Monday are in the same spot as Binns. Still offering to-go orders, and remaining hopeful they will open their dining rooms again in the near future.

Buckhead Life Restaurant Group, which owns such restaurants as Atlanta Fish Market, Buckhead Diner, Chops Lobster Bar, and a handful of other restaurants, are working to open their dining rooms but need more time.

"We have been preparing and planning for weeks to ensure our dine-in execution is flawless," a Buckhead Life Restaurant Group spokeswoman wrote 11Alive by e-mail on Monday. "Over the next several days, we are setting up, measuring, re-working kitchen stations, etc. so we go above and beyond the guidelines. We plan to do service with staff mid to late this week (without the public) testing and executing what we have planned on paper and to see if it actually works physically."

After the test runs, their CEO will then decide if any of the group's restaurants are ready to open their dining rooms.

Joining Diesel on Monday was Moe's Original BBQ in Midtown Atlanta. After weeks of only serving barbecue to-go, Moe's opened its dining room in time for lunch.

"We feel like we are providing the safest environment for our employees and our guests to come in here and have a meal if they choose to do so," owner Brian Mancuso said.

Mancuso described how he hired a cleaning company to disinfect the entire dining room and restaurant. Similar to Diesel, many tables are blocked off to force customers to sit at least six feet apart. Workers are also wearing masks, gloves, and cleaning often.

Mancuso said as a small business owner and employer, he was excited last week when he was able to call his employees and welcome them back.

"We are going to bring half of them back this week and by the end of next week we will have every one of our employees back on the payroll that were part of our payroll before all this started, they're all coming back," Mancuso said.

Kemp: Had to get the state moving toward getting back to work

Lawrenceville threatre invites you to join the digital stage