In a letter to the Secretary of State, the speaker expressed that he had concerns with holding elections on May 19, amid the coronavirus pandemic.

ATLANTA — Georgia Speaker of the House David Ralston is asking the Secretary of State to postpone Georgia's primary dates until well into the summer, as the coronavirus pandemic continues to disrupt almost every aspect of everyday life.

In a letter to Secretary of State Brad Raffensperger, Ralston expressed that he had concerns with holding the Georgia General Primary on May 19. Georgia's presidential primary - which was originally supposed to be held March 24 - was also moved to that date.

Now, Ralston is asking for the primaries to be rescheduled to no earlier than Tuesday, June 23, amid recommendations from medical experts to implement social distancing to flatten the curve, or suppress the spread of the COVID-19 coronavirus.

In his letter, Ralston said the present reality of the coronavirus pandemic facing the state, the nation and the world is unprecedented - a situation that is impossible to predict the end of.

"Our prayer is that we will be on the other side of this difficult period sooner rather than later. However, the inescapable truth is that we do not know the duration of the immediate health peril. Reputable scientists and physicians cannot agree on its duration," Ralston wrote. "All of which means that the precautionary measures recommended by the CDC and adopted in executive order by Governor Kemp will continue for an unknown period of time."

READ: David Ralson's letter to the Secretary of State 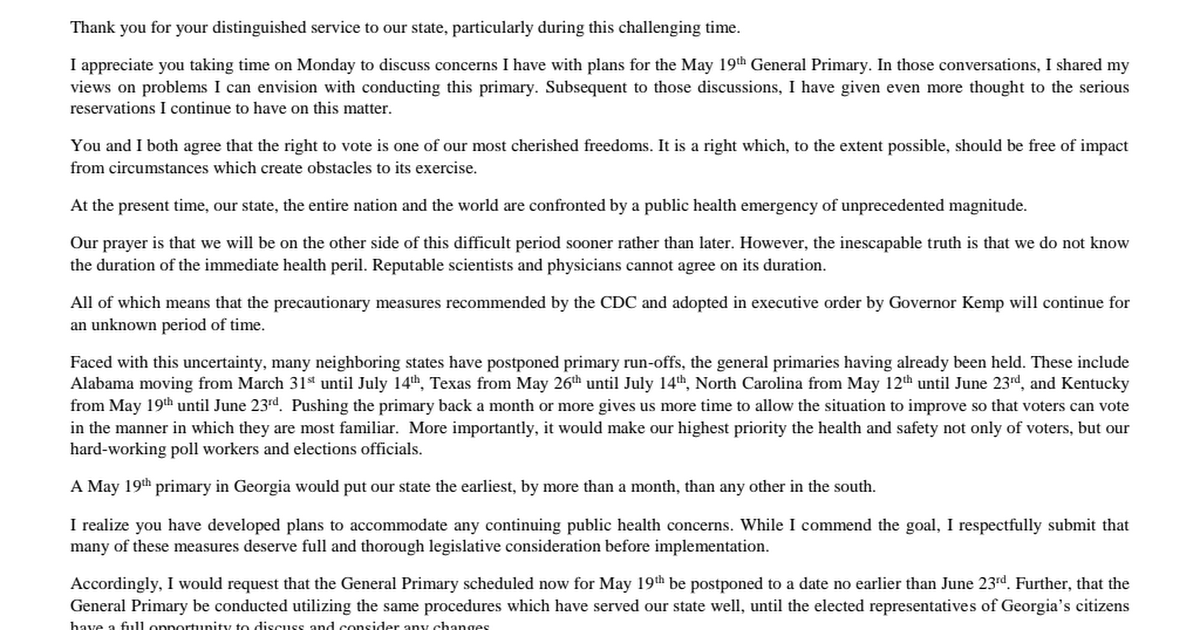 Ralston added that neighboring states have already rescheduled the dates for their primaries well into the summer, and having a May 19 primary in Georgia "would put our state the earliest, by more than a month, than any other in the south."

Pushing the primary back a month or more, Ralston argued, would give the state more time for the situation to improve and to make the health of not only voters, but also poll workers and election officials, the state's "highest priority."

"You and I both agree that the right to vote is one of our most cherished freedoms," Ralston said. "It is a right which, to the extent possible, should be free of impact from circumstances which create obstacles to its exercise."

11Alive reached out to the Secretary of State's office, but it did not wish to comment.

Coronavirus in Georgia: Confirmed cases jump to 1,525 with 48 deaths